Data-driven analysis of the total, gratuitous inadequacy of women's pockets

Huh, kinda surprised at Wrangler, Lee, and Levis not being more utility driven. Is this more because of the expectation women carry purses?

And that’s when the clothes even have pockets at all! Lots of women’s clothes have no pockets or fake pockets where the men’s analogous item has them-- looking at you, blazers.

Levis are not as utility-driven as one might imagine. Not anymore, anyway. I went into a Levis shop a couple of months ago and not only did they not carry a single item in my size in the entire store, there wasn’t a single pair of womens jeans in there that wasn’t “skinny”, “jegging”, and/or artistically pre-shredded. Here are their current offerings. I wanted practical jeans and I had to go elsewhere.

Huh. Well to be honest, I usually just ask for jeans for Christmas and my mom gets what ever. I think lately it has been Wrangler. Levis 550s I think used to be by goto. They tended to last longer. Of course they always had more trendy styles but surprised they haven’t kept the more classic cuts. Looks like they still make the 550 for men. I don’t know what the womens equivalent is/was. They still make boot cut, it look like. But yeah, the whole “skinny” and form fitting trend is everywhere. I am glad it isn’t forced on males, or one would more easily see the mutant I am

True story: my cousin couldn’t get his wife pregnant. The problem turned out to be that he was wearing tight jeans. Switched to sane pants and now he’s a father. 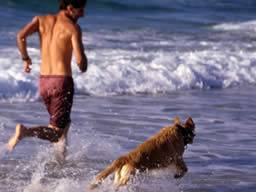 According to a new survey of 2,000 British men, tight-fitting jeans can cause urinary tract infections, twisted testicles, bladder weakness and long-term health consequences.

Skinny jeans are harmful to women, too.

That’s been a common issue for some pre-skinny jeans. Some people had to switch from briefs to boxers.

Never had that problem myself… damn it. Some people enjoy months of trying, I got the job done first try. I procrastinate everything else in life…

Yeah, same here. I am obnoxiously fertile. And no surgeon around here will absolutely guarantee a vasectomy, either… they say about one in 4000 vasectomies will spontaneously heal years later.

Apparently women’s skinny jeans problems can be worse than men’s, partly because they are more easily misidentified? Women think “oh, I’m getting older, that’s why I’m having so many female problems” instead of “oh, I’m getting older, I should wear larger pants” while men think “ow ow ow I have a twisted testicle, I need to stop wearing these ludicrous hipster pants because they hurt”.

Pockets, unlike purses, are hidden, private spaces. By restricting the space in which women can keep things safe and retain mobility of both hands, we are also restricting their ability to “navigate public spaces, to carry seditious (or merely amorous) writing, or to travel unaccompanied.” If you think this idea is outdated, think about the last time a woman asked her boyfriend/male friend/anyone in men’s pants to carry her phone/wallet/keys on an outing.

Not that any of this justifies the horrible habit of producing clothes with insufficient pocketage, mind you.

Truly a market failure. Somebody should start a clothing brand or store named “Pockets” which only stocks women’s clothing with usable sized pockets.

Edited to add: not surprisingly others are there first. https://www.pocheposh.com/pages/about-us

I’m a medium large male, so paperbacks fit easily into my back pockets, but sitting on them will usually break the spine. A paperback or 7" tablet will fit in the inside breast pocket of a suit or bomber jacket, though, which is reasonably safe storage.

However, when I need to carry a hardback or a stack of papers, I put them in the waistband of my trousers at the small of my back, sandwiched between the material of my shorts and pants, held by my belt. I learned that trick from a woman! It’s not as secure as a briefcase or purse, but lets you have both hands free. I’ve carried documents that way all day before.

EDIT: probably will not work if you are wearing supertight pants and/or are carrying enough extra weight that it bulges over your waistband at the small of your back.

is this more because of the expectation women carry purses?

Frankly, I’m surprised women’s jeans have ANY pockets. I assumed jeans and handbag (really people, a purse is what you keep your coins in) manufacturers had long since come to an agreement about that. Manbags have never really caught on (messenger bags et al do not count) and removing pockets from men’s jeans is the obvious next step.

I wear a black leather fanny pack sometimes to scare the police. I’ll put a candy bar or a banana in the concealed holster.

I know, that’s stupid and dangerous to others, I know, sorry, I’m a bad person with a sick and twisted sense of humor. But it’s consistently amusing to me how the police become both wary and extremely respectful if you’re a big old white guy with a fanny pack. They seem to assume you’d never commit such a fashion faux pas if you didn’t have some kind of hand cannon in there.

Oh man, you should be arrested by the fashion police! If you really want the stink eye, were a photographers vest with it (i.e. the “shoot me first vest”)

Fun fact - first person I saw with a fanny pack was a Japanese exchange student one of the 4-H mentors brought some of us kids out to meet. I don’t remember much about the encounter, other than seeing that fanny pack and asking what it was. I was told it was her purse. I think it was several years before they sorta caught on here.

In hindsight I feel sorry for the girl - coming all this way and being placed in a small town in Kansas. 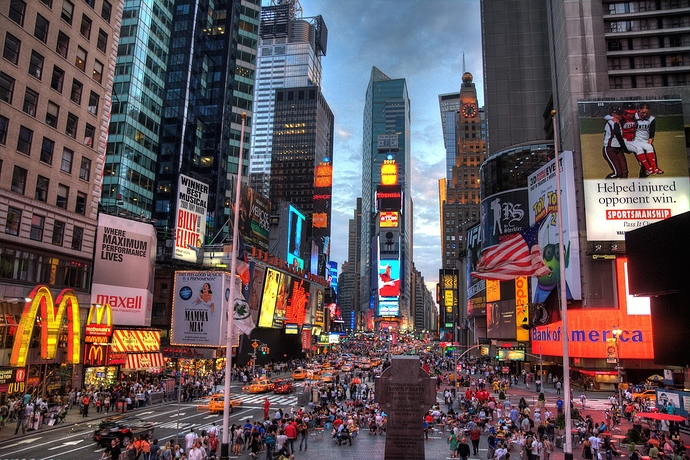 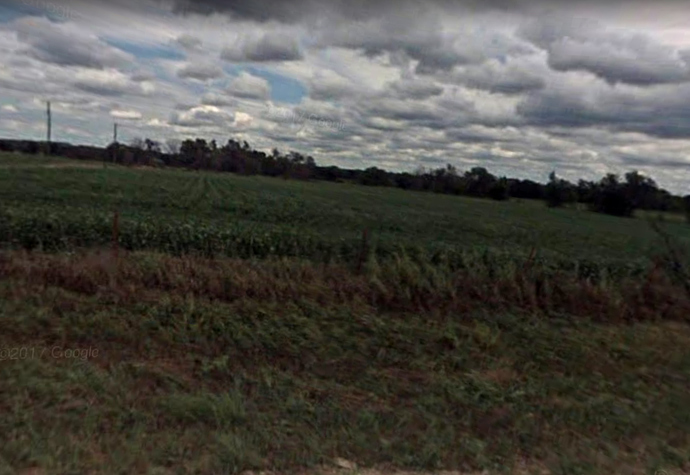 “There’s been some kind of horrible mistake!”

Why yes, I do have thoughts about pockets!

I’ve gone through many phases of attempting to carry stuff on my person. In my teens it was baggy jeans (hey, it was the '90’s and I was massively insecure about my body). In my college years I moved to cargo khakis (cargo pockets are honestly kind of useless, at least on loose pants, because you put anything with more than minimal mass in there and it flops around when you walk and then is awkward when you sit down). Moved to slightly more fitted and less pockety pants as I tried to become an Actual Adult, but still had enough to carry my basic loadout of keys, wallet, knife, phone. Entered the parenting stage and suddenly there was a diaper bag for extra stuff, which was pretty handy, but also unwieldy (and this was with a small diaper bag, not the huge ones where you can carry an entire extra child in case your primary child is just too messy and needs to be disposed of). As we moved out of the diaper bag phase, I lost some weight and felt a bit better about wearing more fitted pants and overcame my previous aversion to jeans (turns out if you spend more than $15 on your jeans, they’re more comfortable - who knew?) but then I discovered that with the tighter jeans (and we’re not talking skinny jeans), it became moderately less comfortable to carry stuff in pockets, particularly when sitting, and I actually had one phone that after a couple years developed a small but noticeable twist from the way my jeans pressed it against my thigh when sitting.

Then, I finally came to terms with my gender, bought my first pair of women’s jeans and came to face-to-face with what I knew, but had not experienced: I could not carry all my stuff in my pockets. This coincided with starting to carry a tablet on a regular basis, so I bought a small crossbody bag and realized that I could now carry more stuff than when I just used pockets. At this point, as long as I have a pocket big enough for my keys, I’m happy. But lower garments with no pockets at all are still BS in my book. I will make an exception for “dressing up” occasions, but skirts with pockets or GTFO.

Overall, at this point, I don’t really miss guy pockets. There are times when I’d prefer to not carry the bag, but they are few and far between and I can usually cope. The phone is the primary sticking point, so I end up carrying it my hand more than I’d like (at this point, I’m seriously considering downgrading from a smart phone for reasons, but that’s a whole 'nother thing).

It’s a little hard to get worked up about pockets against an ocean of idiotic nonsense like single number “sizes”.

If my brother is any indication, the cops assume you have a gun in there because they have one just like it for their gun when off-duty.

It’s a little hard to get worked up about pockets against an ocean of idiotic nonsense like single number “sizes”.

Don’t get me started.

I would shop there.

The amount of women’s attire that has either no pockets or completely useless ones is utterly ridiculous.

And to all the dudes here wondering if the small or nonexistent pockets are due to the sexist expectation that “all women are ‘supposed to’ carry purses,” yes; that’s a big part of the problem. 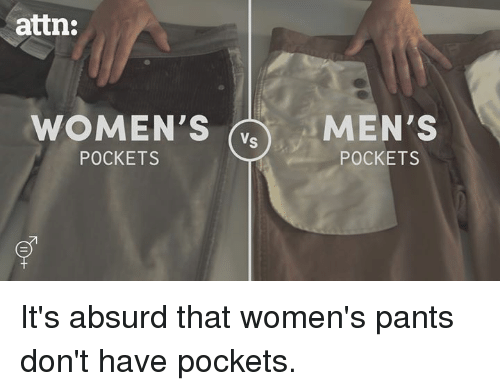