David Bowie on cocaine in 1974

I can barely snif sit in my seat watching, so sniff painful… Also see some David Brent -isms in this little inetrview, wouldnt be surprised!

Wow. Do the effects really last that long, on what I assume to be quality cocaine?

@beschizza Heya! just a note that someone seems to have broken the layout of boingboing.net/blog: Images, Videos and text have their right uh third or so truncated. (At least on Firefox, Safari and Safari iOS.)

uncomfortable. I feel for Cavet.

Bowie’s clothes still look cool (no surprise) but how was a hospital-white leisure suit ever a thing? Cavet’s natural disposition is like he’s permanently on xanax, but dressed as he is, he’s a medallion away from being the dude cutting out lines at 54.

Can’t ever get enough:

How is being that tweaked ever “cool”??? I admire Bowie and his art but that was a fucked up time for him.

Ohhh, ON cocaine. I was expecting a discussion by him on the topic of cocaine.

I didn’t really enjoy watching this. Perhaps it’s snark to pay the bills. 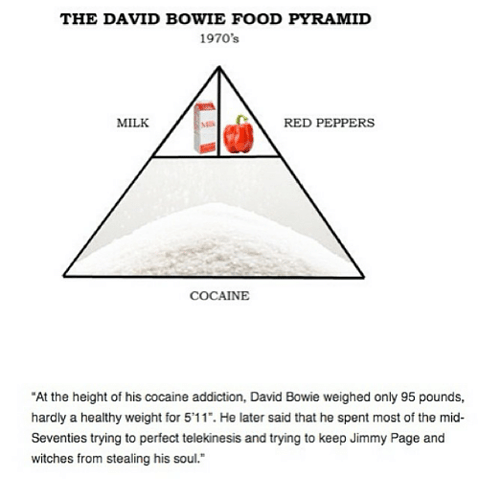 From my own observations I would guess he’s been up doing coke for a while at this point. The janky motions seem to hit these people after a couple days up and the erratic behavior sometimes referred to as a cocaine psychosis usually shows up after a few days and I think has as much to do with your body fighting sleep as the actual drug. A lot of serious coce abusers also drink to maintain some sort of balance between up and down but all I’ve ever seen is idiots drinking and snorting all night and failing at anything I’d call “balance”.

I know a few truly casual users and the don’t lose lucidity or body control because they do a bump like a normal person might take a shot of whisky or even an espresso. I don’t really have any firsthand experience getting “high” from snorting coke. I’ve done a little bit a few times, but not enough to really feel like I was super high.

I did know a couple of freebasers in the day who had permanent problems related to abuse (stuff from strokes or heart attacks, brain damage from overdosing, etc), but Bowie clearly never had that.

Eh, he’s just fidgeting, yes from cocaine, but it’s not all that bad. You should see unedited footage of Adam Savage. He’s way worse, and that’s just ADHD.

I knew about the red peppers and milk, but 95 pounds? Yeeeeezus. He must’ve had lucid command in directing and recording Station to Station because most bandmates would’ve pulled aside someone in that state.

Same here. Not even joking.