I see Dauber from Coach.

They can deepfake voices now too?? 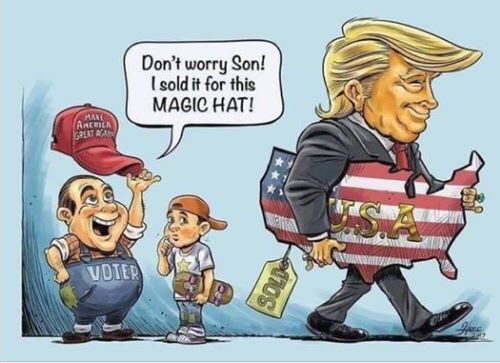 They can indeed. Companies have already been scammed out of money by the “CEO” calling to tell people they need a money transfer ASAP.

I don’t recognize the original scene. What season is it from?

There is a voice artist credited at the end of the video.

if a “pee tape” ever does surface, it will be dismissed as a deepfake

If you can’t recognise it, maybe they took a video of Trump and Kushner and made it look like ‘Breaking Bad’ or ‘Better Call Saul’. Either way, there is not a lot to do.

Kushner didn’t look right to me until I realized why … the deep-fake version had more expression and “life” than the real-life Kushner has ever showed! Real-life Kushner is like a barely animate Ken doll.

The level of sophistication is just insane. But I think I’m even more impressed by the voice work. It’s almost flawless and completely credible.

Technology aside, the scene is completely in-credible. The body gestures are wrong. The hair is wrong. And “Trump” is speaking in full sentences and making a coherent argument (thesis and premises, not just one or the other).