Interesting to see the right try to co-opt one of the left’s issues (anti-racial profiling) like this.

Boy, that checkpoint has gotten a lot bigger since I worked there years ago. Plus it is farther north now. It used to be 11 miles north of the border, then moved to the 15 mile marker and now it is half way to Cotulla, Texas! (Great chili cook off and BBQ Sauce contest there every year, too!)

Quite a map they show; apparently Canada owns Lake Michigan, and so Chicago counts as a border city.

If truly that is how they enforce it, that is NUTS.

It says Washington, D.C. is a border city, too. Surely the Senate and House won’t mind if we pull them all over and interrogate them about their right to be here, will they?

You think Chicago is bad? Pretty much all of Florida is considered a “Border”.

They also count airports, truck stops, etc. as major international transit hubs, so they get 100 miles around those also. How many people live more than 100 miles away from an airport with international flights or from a truck stop on an interstate highway?

Notice how the border patrol agent sounds like a scared child with low IQ? Pretty scary considering he likely has a gun and a posse of similar jackasses backing him up. 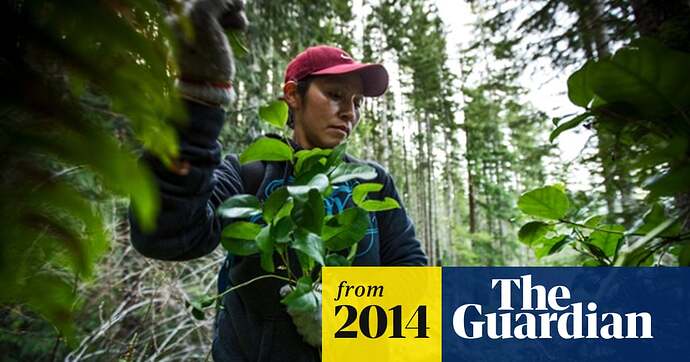 'It was like a horror movie' – the undocumented Latinos living in fear of 'la...

About 2m undocumented migrants have been deported under Obama – and a backward trek has begun. In the first of a three-part series, Rory Carroll reports from Forks, Washington

The problem is, officers appear to be trained to escalate the situation until they can finally “deal with it.”

This works for me:
-Stay calm and show ID/registration/car insurance if asked.
-Don’t be scared, agitated or rude no matter how much the officer tries to escalate. It is okay to be curt and direct, but not rude. Rudeness never helps your case.
-Calmly say “I do not consent to a search.” You might have to vocalize that several times during the encounter, even an officer starts searching anyway.
-Do not answer questions. Instead, ALWAYS reply with “I do not answer questions.” It is okay to repeat this often during interrogation.
-If you feel cornered into saying something other than “I do not answer questions,” demand a lawyer. Demand a lawyer again. And if that does not stop the interrogation, demand a lawyer. If you reach this point, slow down since you are no longer in any hurry. It is better to walk tomorrow than get hit with bogus charges, appearances in court, plea bargaining, fines, jail, possible hospital time and recovery, etc.
-Do not talk to any officer, since that only helps build their case, not yours. Talk to a lawyer instead. Even if that takes 19 days.
-Whatever you do, DO NOT TALK any more than is absolutely necessary in the presence of authority EVER (even meter maids). Let a lawyer speak on your behalf.

I am actually starting another country inside of the “borders” of the US, so that should make things interesting.

This might not be a “Hitler” issue, rather a “little Hitler” issue-- they imprisoned him for making their shitty jobs more difficult, like a bureaucrat at a desk making you fill out unnecessary forms in triplicate because he’s decided he doesn’t like you.

It’s my experience that assholes with ego problems look for these kinds of quasi-military jobs, like a mall security guard giving punk rockers a hard time simply because they “look weird.”

That said, I’m sure his accent and swarthy skin made them ultra-confident they had the right to up the asshole quotient several notches.

I don’t think Chicago has it as bad as Florida, no. I think the way they are drawing the lines around Lake Michigan is at odds with Reality.

Anyone have any family that lives in Sault Ste. Marie, so we can confirm that they haven’t been quietly conquered by the Canadians?

Like that time a football player didn’t serve a day in jail for running down a punk rocker in Texas?

On December 12, 1997, 19-year-old punk musician Brian Theodore Deneke (March 9, 1978 – December 12, 1997) was killed in a deliberate hit and run attack in Amarillo, Texas, by 17-year-old jock Dustin Camp. Camp was later found guilty of voluntary vehicular manslaughter and sentenced to ten years probation. In 2001, he was sentenced to an eight-year imprisonment for a variety of parole violations. He was paroled under supervision on July 31, 2006. The homicide and the outcome of the trial against C...

I’m proud he is an American.

If you watched that video and the only problem you saw was racial profiling I think you need a remedial civics lesson.

Is it to be called Popobawa?

If you think the only problem I saw was racial profiling, and that everyone should write down every problem they see with every video or post they comment on, well, you’re some kind of idiot, no?

Nice job, too, ignoring the problem that I did point out.

I take it you are white and speak fluent English with an accent that sounds like it originates inside the USA?