Did the world need to see Kurdi images? 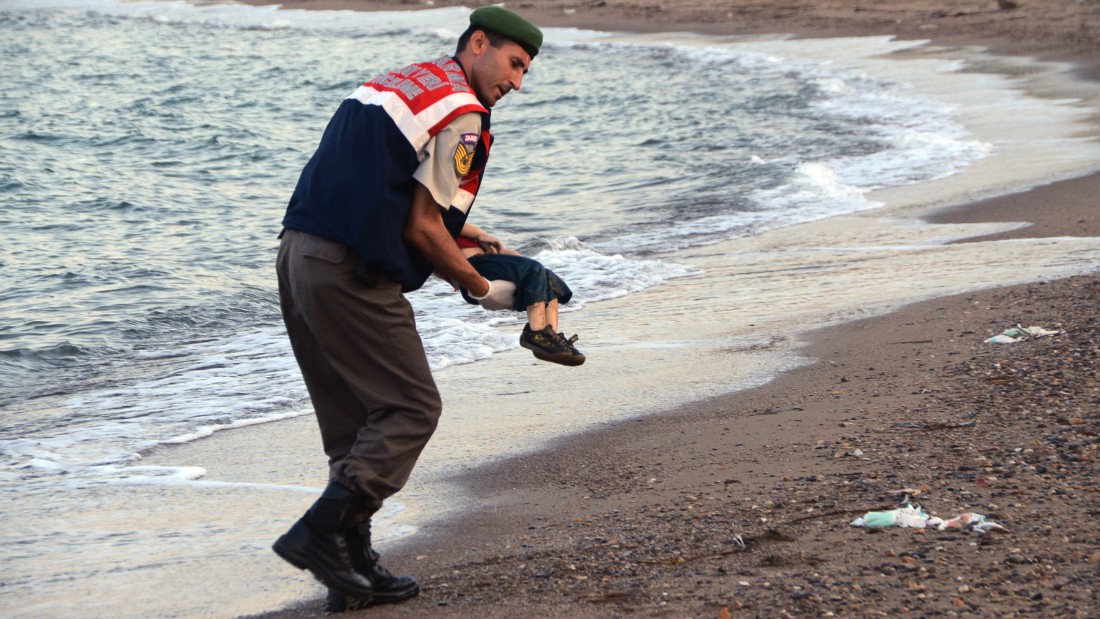 Why the world needed to see these photos - CNN

Are you fucking kidding me? Why is anyone asking that ridiculous question?

I’ve been wondering why the Sun, Mail, et al have been trumpeting ‘Humanitarian Crisis’ the last few days. Then I saw today’s Times headline where Cameron is calling for more airstrikes. Presumably, once we’ve dropped some more Democracy on Syria, they’ll go back to being a ‘Swarm’. Fucking hell, I hate everything.
(n.b. not that IS don’t need the shit bombing out of them, but Western airstrikes aren’t going to do the job without some sensible policies towards the entire region. Not fucking the Kurds over would help as well, but can’t be too nice to them, cos they’re dangerously lefty. Now I hate verything even MORE. Gah)

Can’t find a way to get this vid embedded - but if you can watch it, it should put the nail in the coffin.

I don’t know - it’s troubling that we need this, but many people need a sense of connection with victims beyond the fact that we’re all human. I think the video in the article is good, pointing out the situation that the family was running from and how the gamble of showing more graphic images in the hope of getting us to feel something will not necessarily work. However, part of it is also showing the humanity of it and to some degree forcing us to relate to people that are often presented as an inherent problem or threat to our way of life. Showing individual stories focuses the narrative back on the victims rather than those who are wondering how much this will cost or whether their comfortable lives will be affected. I wonder if the refugees coming to Germany this week would have been welcomed as openly if people hadn’t seen the images of this family and the opposition refugees faced in Hungary last week.

A more positive example of this is the sheer number of events that have been put on for refugees where I am in Hamburg. Aside from the welcome that people had over the last couple of days, there are a number of voluntary groups that are trying to strengthen ties between refugees and locals - group outings, coffee mornings, German conversation classes, donations, meetings where people can share their experiences etc. I’ll be going to a refugee home with my kids later this afternoon, as there’s a weekly event organised to bring local and refugee families together. This seems to be a much more sustainable way to encourage support for people, rather than graphic footage of the latest tragedy, with close-ups of the dead kid and grieving father.

Yep - my take was somewhat more cynical - in terms of “how do you crack the message that these people need help into skulls” - because in general people have had their heads in the sand ever since Syria started going awry.

So the answer is - yes, the world did need to see it - because that’s what it took to change - and the macro outcome is the proof.

I’m not sad or angry about this - but I do wish people would think a little ahead!

I guess we may be coming from different angles on this one, partly because the person I know who shared the pictures the most is a Jordanian Palestinian who has been saying a lot about the refugee issue for quite some time.

Jesus.
I had to do some Googling to make sure that isn’t a Photoshop joke.

This topic was automatically closed after 532 days. New replies are no longer allowed.