this last is a very gendered and racially unbalanced problem for publishers, effecting women, people of color and queer people more than white dudes like me.

Props for that – really – but the editor in me has to point out that the Effect is the outcome; currently, this problem is Affecting certain populations more than others.

Was Armstrong (a) running a personal blog in which she used advertising to cover her costs of bandwidth, or was she (b) running the blog as a moneymaking enterprise in which the ad revenue was a profit center for her?

If the former, I sympathize. If the latter, my give a damn gauge is stuck on zero.

If you don’t know who Dooce is or what her blog was/is… maybe you should look her up?
She’s famous, she was on Oprah for pete’s sake! She was one of the first big “full-time” Mommy-bloggers.
You may not know her, but this is huge news.

I was on a team that was buying product plugs from mommy bloggers. Even at this nontoxic women-owned and -lead company, there was a vibe of “who are these assholes who think we have to pay them” that we would never have with, say, a print ad in the local newspaper.

I can only imagine what it’s like at toxic ad agencies forced to employ them.

Was Armstrong (a) running a personal blog in which she used advertising to cover her costs of bandwidth, or was she (b) running the blog as a moneymaking enterprise in which the ad revenue was a profit center for her?

A became B, but was still also A. She was running a publication, for money, which traded heavily on her personal life.

BINGO! It’s like people who stalk actresses and call them names – they’re doing a job, and it comes with the territory!

1 - She quit blogging for money back in April. BB even covered it:

Heather B. Armstrong says she will still blog a bit for fun, but will focus on consulting for brands.

2 - She still actually does “Mommyblog” from time to time, she hasn’t quit entirely.

I really miss the letters she used to write to her eldest daughter. They were, IMO, the best part of her blog.

What bothers me about all this blogging and advertising in blogging is that under the US FTC they need to clearly disclose. So many don’t.

In my business, I have had numerous people who email me asking me for my services for free in return for a review or blogging about it. My first question is always “Will you disclose?” The problem is, Yes and No are both bad answers. If you answer Yes, then people know your opinion is tainted because you were paid. If you answer No, then I know that you are selling yourself and that your opinions aren’t really worth it. Hence the scandal a few months ago called #MACARONGATE or #BLOGGERBLACKMAIL if you prefer.

When I told one blogger “NO” she started talking about how it was “giving to the arts” and I should think of it as a donation. Donations come with tax receipts. But many industries see this “do this for free” stuff. Ask anyone who builds website or does desktop publishing how often clients want things cheaply or free but you’ll get work from it.

Every dollar you take, no matter in what service industry you are in, comes with strings. Restaurant chefs, Authors and hoteliers have the strings of critics (real and amateur) just to give an example. There is very little money that doesn’t come with strings attached somehow.

The only thing articles like this highlights for me is how much people that have been extremely successful on their personal endeavors don’t seem to understand that the money comes from somewhere. When you are working in a “traditional” (for extreme lack of a better word) office it becomes obvious how submitting to the people who can advance your career results in more pay and responsibilities and how easily that tempts you to break personal conviction, but when people are using consumers to promote their business they don’t get that increasing the revenue from advertising or increasing products sold in your name is the same thing. You are giving something up to get that money from your audience, and your larger audience will also cause the shit audience to grow too.

You can never break that cycle of personal finances versus what you give up for them until you find a happy balance between the two that meets your personal life’s needs. It can be presented as a toxic relationship between advertisers and publishers, but it will always be a way of life in the first world.

And don’t get me started on advertorials. When you start doing advertorials, you have zero credibility.

As the supply of publishers went up, advertisers gained leverage they could use to insist on more invasive ads and more unethical editorial practices…having to pitch products with false sincerity, and censor her authentic voice because advertisers feared it would offend their customers.

This mirros my expeience with online advertisers, and advertisers in general.

I’m confused how we can have a frank and honest post like this about the down side of advertising the very day after we are told to save online advertising. hmmmmmmm

She’s famous, she was on Oprah for pete’s sake!

Well my gawd, I can’t believe that I’m such an ignoramus. I must have been in the hospital, or passed out drunk or something, to actually miss an episode of Oprah!!

You may not know her, but she’s “kind of a big deal” - I’m not even joking. She’s been on loads of TV shows, Oprah, the Today Show, had a contract with HGTV, hell I think she was even on Dr. Phil!

My point is, her quitting blogging is a big deal. Thats all.

A bigger deal 6 months ago, when it happened.

It was also a big deal this month when she gave a killer speech at XOXO. 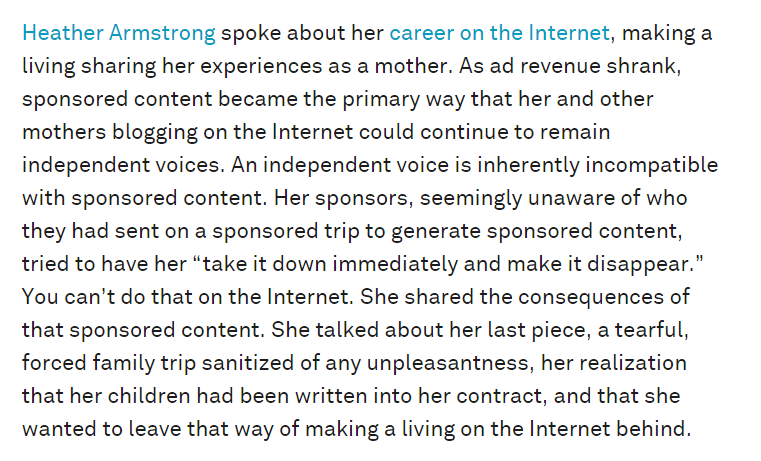 We’ve been talking about it over on GOMI for ages.

You may not know her, but she’s “kind of a big deal”

Funny thing is, she lives a town or two over and nobody around here has any idea who she is.

Unless you’re trying to effect an affect.