Is that Homer Simpson in a mu-mu? 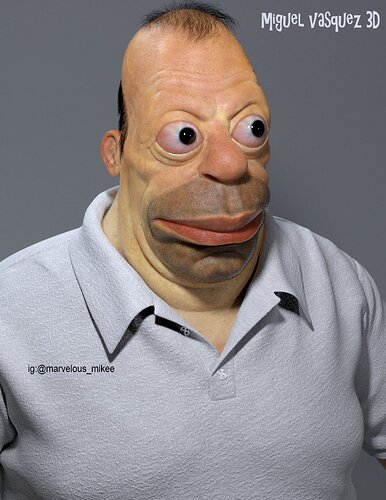 This humanized version of Homer will have you saying, "D'oh my god! Make it go away!"

No - Homer was likable and had a tiny amount of charisma.

That guy is just a duffer crying over his lawn getting crabgrass and complaining about immigrants.

Did punk rock change or did Johnny Rotten Change? hrm let’s just look at the facts here. What a twat.

I’m really curious here… .what the actual fuck makes Lydon - someone who has lived in the UK for decades think the right wing isn’t the Establishment? He fucking votes for Tories, for fuck’s sake. How much of a tool can one man be before getting “made in China” stamped on one’s forehead?

Is that Homer Simpson in a mu-mu?

That’s kind of a thing on Boing Boing. If a musician takes a bad stand on social issues, they’re suddenly untalented. For example, because Eric Clapton’s a bigot and a COVID denialist, they act as if he’s a terrible guitarist. It’s like a reverse halo effect.

He’s right about one thing. They’re definitely giving everybody the middle finger.

Sure, whatever, except punk is in no small part a subculture with associated beliefs on social issues. Wikipedia starts its article on the subject noting that “the punk ethos is primarily made up of beliefs such as non-conformity, anti-authoritarianism, anti-corporatism, a do-it-yourself ethic, anti-consumerist, anti-corporate greed, direct action and not ‘selling out’”. So, you know, if someone doesn’t fit with those values, maybe it’s not some kind of knee jerk insult to suggest they don’t really fit the movement?

Or he’s always been a reactionary arsehole with little musical talent who skated by on controversy, trading insults for kudos while yearning for any genuine affection.

Probably the arsehole one.

So yeah maybe this headline is a bit click-baity cuz it annoys people and makes everyone want to argue about the question of whether the Sex Pistols were “punk” rather than engaging with the actual topic that elon musk thinks the living member who turned into a rightwing establishment arse kissing tool is still punk and therefore cool and that his rightwing quote is worth retweeting.

4D chess sounds really cool, but more and more it seems like nobody has any idea about this extra dimension, and people just like to invoke it when someone is knocking pieces off the board.