Enjoy being an unpleasant goose in Untitled Goose Game

So THAT is the explanation for my missing socks…

I was at PAX this year. You would not believe the line to play the demo for this. I did get a No Goose Button and after 45 minutes to watch the Kerbal Space Program 2 demo a KSP flag.

I already enjoy being an unpleasant goose.

i don’t see katamari references at all. i do, however, see Donut County.

Katamari was a quirky series of games, often had amusing interactions as you went through the world. I don’t see direct connections between both games but i do see that they are kindred spirits as far as game design philosophies go.

When they finished the new boat house on Lady Bird Lake 3 geese were introduced and fairly quickly removed for being unpleasant. We also had a couple of swans. Don’t know what happened to them, but they were seriously fucking large, beautiful, birds that you gave a wide berth to.

Not to be confused with Entitled Goose Game. I think that’s about the British Royal Family.

@simonize This game is just another blatant example of anti-goose and implicitly pro-elephant bias in the gaming industry.

Ha, for once Mark beat Rob to the punch! 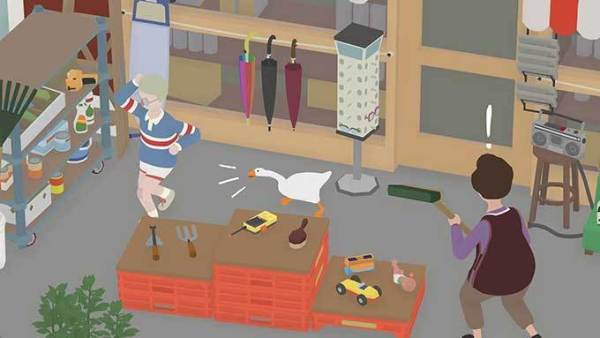 You are a horrible goose in this video game

Further proof that Anatidae are the meanest of birds. It’s a lovely morning in the village and you are a horrible goose. Untitled Goose Game is a slapstick-stealth-sandbox, where you are a go…

My opinion is not based of video games, but on the geese that lived in the pond at my college. And where is the “shit on it” button? You can’t truly simulate a realistic level of goose unpleasantness without the ability to cover every horizontal surface with shit. Dogs at least don’t generally cover your patio table and chairs.

I’m tempted to buy the switch version, if only because I don’t have the Epic DRM/spyware environment installed on my desktop.

You can’t truly simulate a realistic level of goose unpleasantness without the ability to cover every horizontal surface with shit.

As can be seen by just about any bike trail near a body of water. Ye gods, sometimes they’re almost paved with goose grease.

I would be inclined to buy on the Switch as well, plus i think this is a great game to play on the go

A swan is just a goose with a better stylist.

I am really torn on this one. I’ve been following it covetously for a good while. It looks delightful. But I only have a PS4 and a Mac and I really tend to avoid games on the latter.

Do I wait for a PS4 version to materialize so I can easily lounge back on the couch and be an Asshole Goose? Or do I install an entire game store for this one game, and probably have to swear at trying to get a controller to work on my Mac? Or do I finally buy a Switch, haha no, I don’t buy consoles until there’s at least three exclusives I want enough to pay ~$100 plus the game cost to play, and none of Nintendo’s franchises ever makes that cut for me…

And I don’t think you mean schmaltz!