Well of course he isn’t safe on a plane, because they’ve taken the guns away from all the random “good guys.” /sarcasm

Haven’t you heard of a little thing called the TSA and air marshals?

Wait, you’re telling me the TSA doesn’t make us safe? 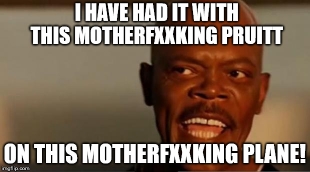 I have a way to fix this problem, Scott. Stop being a dick.

To be fair, he doesn’t always fly first class. 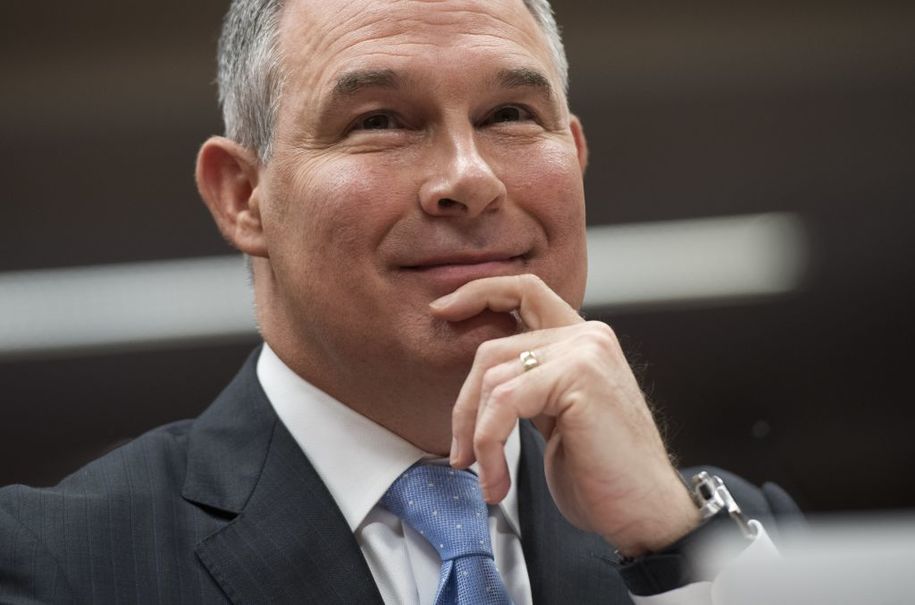 Scott Pruitt pays a visit to a coal mine—in a National Guard Blackhawk...

EPA Administrator Scott Pruitt never stops being Scott Pruitt. Like a comic whose one shtick is corruption, Pruitt can’t help lying to Congress, providing patronage to his friends, putting his palm out to lobbyists, living the high life on the...

As is shown in every single murder mystery TV show ever: “I’m not sad he’s dead but I didn’t do it.”

Could it be that, deep down, he feels he deserves to die for the things he is doing? Or is that giving him too much credit for being self aware?

Either way, it must be nice to be able to upgrade to first class without having to spend a dime of your own money. And I doubt that doing so will make any more people want to kill him than already do.

I wonder if anyone has pointed out to him that it’s even safer down in the cargo hold. In first class, someone could bludgeon him to death with a champagne bottle.

Well I for one promise not to kill him. However if he is seated next to me I am definitely going to hog the arm.

The summary does say Business or First class. I don’t think people who travel for business should use economy class. I flew business when I traveled for my engineering work. There is no other way to arrive healthy and go straight to work.

However if he is seated next to me I am definitely going to hog the arm.

I noticed that this started before he was even confirmed as EPA head. Since he was so much of a jackass well before he became EPA chief, the “threat” that the public poses to him is a pre-existing condition. He needs to foot the bill for his own security and any accommodation that requires.

I’m sure that this heroic security detail exhausted all possible efforts to, say, “arrange adjacent seats in coach by politely explaining to the airline that they had important fed reasons”; before concluding that it was simply beyond human capacity to control the seating patterns of the lower orders in steerage class.

I am, equally, sure that there are Reasons, good, sufficient, and convincing; why Mr. Pruitt feels no threat from persons of business class or better; and why none of his myriad shadowy foes could possibly just save a couple of their antifa Soros Stipends and buy a seat in business class so as to be within striking distance of their betters.

Seems like an ironclad and rigorously examined threat model, without a trace of wishful thinking or motivated reasoning, to me. Possibly not yet deserving of promotion to big-league secret service, and the rigors of organizing a good cartel-funded hooker party; but still commendable work under the grim shadow of a mostly imagined threat.

This certainly isn’t going to make the people who fly coach less likely to want to kill him.

I wonder if he realizes that the people who fly in coach walk right by the first class passengers when they board the plane?

Claiming that there were “some incidents on travel dating back when I first started serving in the March-April time frame,” Pruitt said, “we live in a very toxic environment politically, particularly around issues of the environment.”

Clearly out of touch. To get a better perspective on toxic environments Pruitt might try spending a few weeks living in Flint.

I get upgraded to first occasionally. And if I saw and somehow recognized him there, I’d DEFINITELY say some mean things to him. I’d consider it a moral obligation.

He probably just needs to fly private. (It’s a good thing the environmental impact of something like that wouldn’t weigh on him, of course.)

Come now! he said “very toxic environment politically”! Reasonable Americans for Commonsense Policy understand that killing the poor is apolitical(or, if you must be an extremist about it; at least bipartisan).

FFS, at least one half of the people in coach do not know who he is, of the remainder a good portion are deranged Trump supporters who would take a bullet for him. The rest, yeah, they want to kill him.

This certainly isn’t going to make the people who fly coach less likely to want to kill him.

I don’t know. They say that absence makes the heart grow fonder. I would like to test that theory with this entire current administration.

Pruitt’s stewardship of the EPA may kill us all. I think a case could be made for self defense.