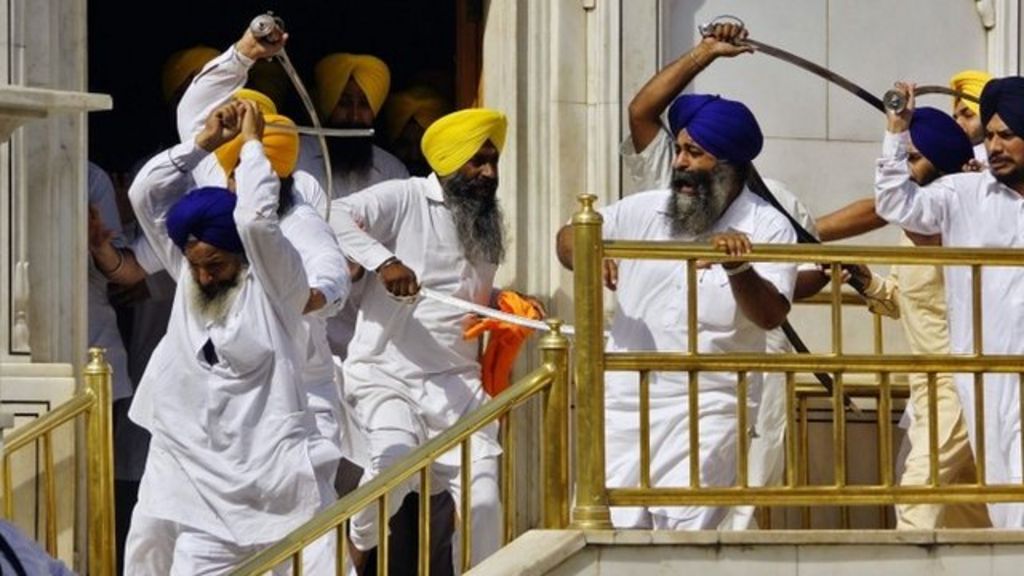 BBC is reporting only three injured.

Well, thank goodness for whatever the combination was of not really wanting that badly to harm one another and nobody much practicing their sword fighting these days.

Notice how the newscast/director thought that the action was sooo riveting that they put up little graphics of the current temperature for a few cities during the fighting?

That’s when I knew that there were no serious injuries.

That, and c’mon, everything’s white. Any blood would have show up.

We lived there when I was 11 and used to take visitors there whenever they came to town, so I probably went two or three times a month. There is an amazing museum surrounding the shallow square reflecting pool containing paintings that made quite an impression on me at the time. They depict the martyrdom of the various gurus and are quite, um, shall we say vivid?

The hell with injuries. That’s the only real swordfight I’ve ever seen, so I’m happy.

Suggesting this was EPIC is flattering to say the least. The three injured probably stubbed their toes.

not to be overly culturally insensitive, but the overblown drama, fake swordplay, and turbans instantly made me think of that old Sinbad the Sailor film franchise with the Harryhausen effects.

Damn - that makes the SCA rattan fights looks rather tame.

no one there knows how to use a sword obviously. in a real sword fight all those pretty outfits wouldn’t stay so white.

You know i bet they were all ornamental/dress swords which usually aren’t sharp.

With misunderstandings being part of sarcasm without wit, they themselves are without a soul.

Everyone please read before you continue, It is a real issue. India Operation Blue Star was an Indian military operation which occurred between 1 June and 8 June 1984, ordered by Prime Minister Indira Gandhi in order to establish control over the Harmandir Sahib Complex in Amritsar, Punjab, and remove militant religious leader Jarnail Singh Bhindranwale and his militant armed followers from the complex buildings. Jarnail Singh Bhindranwale was invited to the Harmandir Sahib, and later on made it his headquarters in December 1983. The operation had two comp...

Those swords are sharper than you think.

Gatka (Punjabi: ਗਤਕਾ Urdu: گٹکا gatkā) is the name of an Indian martial art associated with the Sikhs of the Punjab region. It is a style of stick fighting, with wooden sticks intended to simulate swords. The Punjabi name gatka properly refers to the wooden stick used. The word originates as a diminutive of Sanskrit gada "mace". The style originated in later 19th century, out of sword practice in the British Indian Army, divided in two sub-style, called rasmi (ritualistic) and khel (sport) from t...

I already read about what happened in 1984 - but this incident seemed to stem from internal arguing on who was going to speak about the 84 event.

And while their swords were patterned off of real sabers, it’s still possible they were dress copies. My grandfather’s Coast Guard sabre is patterned after a real fighting sabre, but it isn’t sharp. While I wouldn’t want to be whacked with it, it would take some real work to draw blood.

You’re right. Although at least two-thirds of the US BoN team are SCA guys.

It seems to me that those guys at the temple are fighting each others’ swords, not each others’ bodies. There’s a pretty significant difference, as demonstrated by the clip I posted in response - I’m pretty sure those Sikh are trying to drive each other away, and not hurt each other.

And the Sikh swords are almost certainly “real” but with rounded edges, like the BoN ones, which have an edge profile shaped like the curve of a euro coin, or a US nickel. Still demonstrably capable of chopping off fingers, and thus meeting the requirement of baptised Sikhs to always be armed, but much safer for flailing around with in a crowd.