The coppers are one step ahead of you:

I wonder if a “3D printed” key in this design would be durable enough.

Not an endorsement of the website, and they don’t cover every scenario, but…: 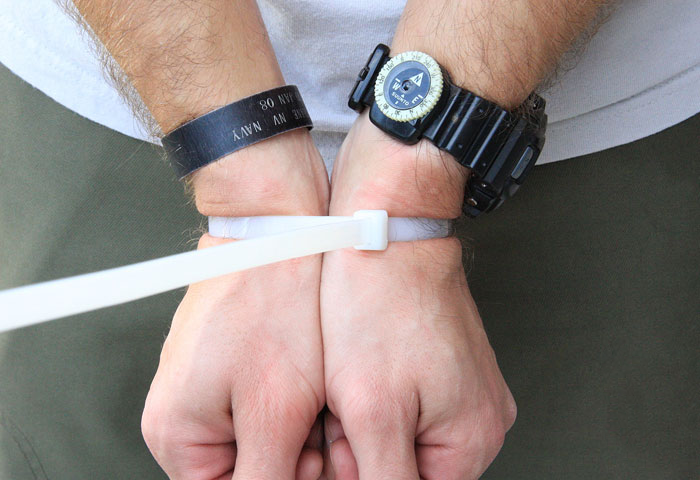 How to Escape from Zip Ties

There are quite a few hasty methods of illegal restraint and zip ties are a method that’s available to any... View Article

Cops get taught to put the handcuff key hole on top. Not impossible to escape form but much harder than what’s shown in the GIF

These are, unfortunately, only useful with single-lock cuffs.
If they had a little post at the top they might be more worth the $8 per key (shipped).

Search for double lock cuffs to see what I’m talking about.

The site does say

Designed to fit all standard “peerless” single and double-lock handcuffs.

Isn’t any extra post on keys for double-lock cuffs used for locking them, not unlocking?

It’s been a while since I had a pair. I may have been recalling incorrectly.
In a double lock cuff, the secondary lock stops the cuff’s pawl from ratcheting. This also prevents the cuff being shimmed out of.
But I do think you can open it with this key after all. Sorry TIHK.

Our cops’ handcuffs have a solid bar in the middle, the cuffs can’t move independently. I doubt these’d work.

I’m afraid I’m pretty cynical about how this little device would be viewed by cops.

You know, I recall more than one post on BB about sneaky handcuff keys. What exactly is the fascination with this? I don’t see the average person, or BB reader, being in a situation where attempting to remove hand cuffs and escape (I assume) working out well. I see more charges and the risk of elevated force being used to detain you.

I’d say some times it is warranted. Years ago at Mardi Gras, I REALLY needed to pee. And you quickly find out that restrooms are for paying customers only. And after you pay for something you really don’t need just to pee, they let you know that their restrooms are out of order…after you’ve been told to buy to use them. After several attempts, and two useless purchases…I made my way to an alley. Only to have someone grab me by the shoulder and me almost punch them. It was a cop. They don’t care about explanations…they just want your $350 (I think this is what the cop quoted).

I was placed in a line with a dozen other guys cuffed one to another in a chain. I was wearing my black leather motorcycle jacket that had a cuff key off hanging off the belt buckle sewn in…I was frisked and everything removed from my pocket – money included (ID in my sock ignored), but my jacket stayed on and they didn’t notice the key. I convinced several folks in line that I was going to pass the key as soon as I was done, and that I wasn’t going to leave until we all ran. Yeah…this logic worked on drunkos. Most of them. Either way the cops weren’t listening to the one guy that was screaming that we were going to escape. Got one undone, convinced guys to pretend I was still chained in hopes that he was going to get unchained too…got the other and told the guys I was going to have to pull my jacket off to get the key off for them. And ran like a mofo…three guys on the ‘free’ end ran into a crowd but didn’t get far…and I disappeared.

Sometimes? Having a cuff key is warranted…especially when dealing with corrupt police officers. Sure…NOLA officers aren’t corrupt compared to other parts of the world, but for the US? I can’t think of a worse police department that I’ve ever had to deal with. I was just lucky I had mine on. Never expected to use it…forgot about it for the first 15 minutes I was in the chain gang. Only had it on there to pretend to be a ‘badass’…it came in handy…

I see more charges and the risk of elevated force being used to detain you.

I can’t imagine a cop handcuffing someone, then later finding them not cuffed, doing anything except reaching for (pistol | baton | pepper spray) and using it with extreme prejudice.

The banal press release describing why the officer was not discharged for (injuring | maiming | killing) an otherwise innocent person would be along the lines of:

An internal investigation has determined that the officer, who will remain anonymous to protect his privacy, followed all departmental guidelines for escalation of force in this incident. No disciplinary action will be taken. The investigation is closed

Another current “best practice” is to handcuff people with their palms facing away from each other. Which will also make this more difficult to use.

[quote=“clifyt, post:13, topic:22624”]
I made my way to an alley. Only to have someone grab me by the shoulder and me almost punch them. It was a cop. They don’t care about explanations…they just want your $350 (I think this is what the cop quoted).[/quote]

Yep, New Orleans cops at Mardi Gras will turn the other cheek for a lot of stuff (technically flashing is illegal), but pissing in the street is the one thing they’re total hardasses about. That’s why people can get away with crazy restroom shenanigans like that.

You needed some locals to tell you which bathrooms are free. There aren’t many, but they do exist.

I managed to get out of zip cuffs while locked in a paddy wagon. The relief for my wrists alone made it worthwhile. Also, after having a friend face life in prison if they went to trial, and thus taking a plea deal for a “mere” 30 year sentence, for his involvement in wikileaks, I think outright attempting escape and risking getting shot is sometimes worth it.

Sadly, I found one right after this. I ran into the crowd, threw my jacket into some trash pulled my do-rag off my belt and threw it on my head and was able to get past the police enough to jump into a restaurant.

The funny thing was, I ended up telling the server that worked there I just needed to hide for a minute from the police and he asked if I killed someone and said “Nope, Just peed in the alley”. Dude just told me I should have come in here, and to sit tight and order food. And that’s when I realized I didn’t have any cash.

He ended up paying for my food. It was a place called the Clover Grill…they cook their hamburgers under trashcan lids that look like they were used! Best greasy spoon in the world, IMHO. Ended up hitting that place for the rest of the week and I’ve gone back every time I’ve hit NOLA. Haven’t been back since Katrina…I hope the place is still in existence.

You know, I recall more than one post on BB about sneaky handcuff keys. What exactly is the fascination with this? I don’t see the average person, or BB reader, being in a situation where attempting to remove hand cuffs and escape (I assume) working out well. I see more charges and the risk of elevated force being used to detain you.

Generally, I agree. When I was involved with Occupy, though, I heard a more specific plan: if there’s a mass arrest, everyone cooperates to get specific individuals who are likely to be seriously abused by the cops (trans people, generally, but I’m sure you can think of others) loose so they can slip off under cover of the larger group. If you can handle spending a night in jail without wrecking your entire life, you get to sit tight and take one for the team.

Fortunately, the police in my area were generally pleasant and cooperative, so it was never put into action. I don’t know if it happened elsewhere.

It helps bloggers that want to style themselves as badass activists on the front lines of the war on fascism indulge their fantasies of thwarting the totalitarian pigs.