Ugh, this post was based on a misreading of the article, and my visceral reactions to other comments made about this same situations on other sites.

Anyway, on to the show:

Won’t someone protect the police from kisses?

Yes, because it’s inconceivable that men would be sexually assaulted. Let’s trivialize it instead!

[quote=“Franco Maccari”]
He explained that if it had happened the other way round, with a police officer kissing a protestor, ‘World War Three would have broken out.’[/quote]
I don’t often find myself agreeing with police officials on most things, but they’re totally right in this regard. Indeed, had the genders been reversed, there might have been more consternation. But it’s just a girl kissing a cop, amirite?

What has this got to do with gender? You’ve read a story and added your own entirely fabricated concern to it. You even quoted the line and still missed the point of the post. You also have likes on the comment - I don’t think I’ve seen a better example of people not reading past the title (which a more cynical person might suggest Rob wrote quite specifically for this reason).

The ‘reversed situation’ is a police officer (position of authority and trust) kissing a protestor (civilian under the protection of the police).

Again, just to clarify - this has nothing to do with gender.

It is different. She kissed his helmet not him. If she had been wearing a helmet and the cop had kissed it, maybe would be seen as a gesture of peace rather than sex. But then, there is the need for the police not to come across as using their power to abuse. Kissing her helmet could have been seen as a hostile gesture. Context matters.

It is different. She kissed his helmet not him. 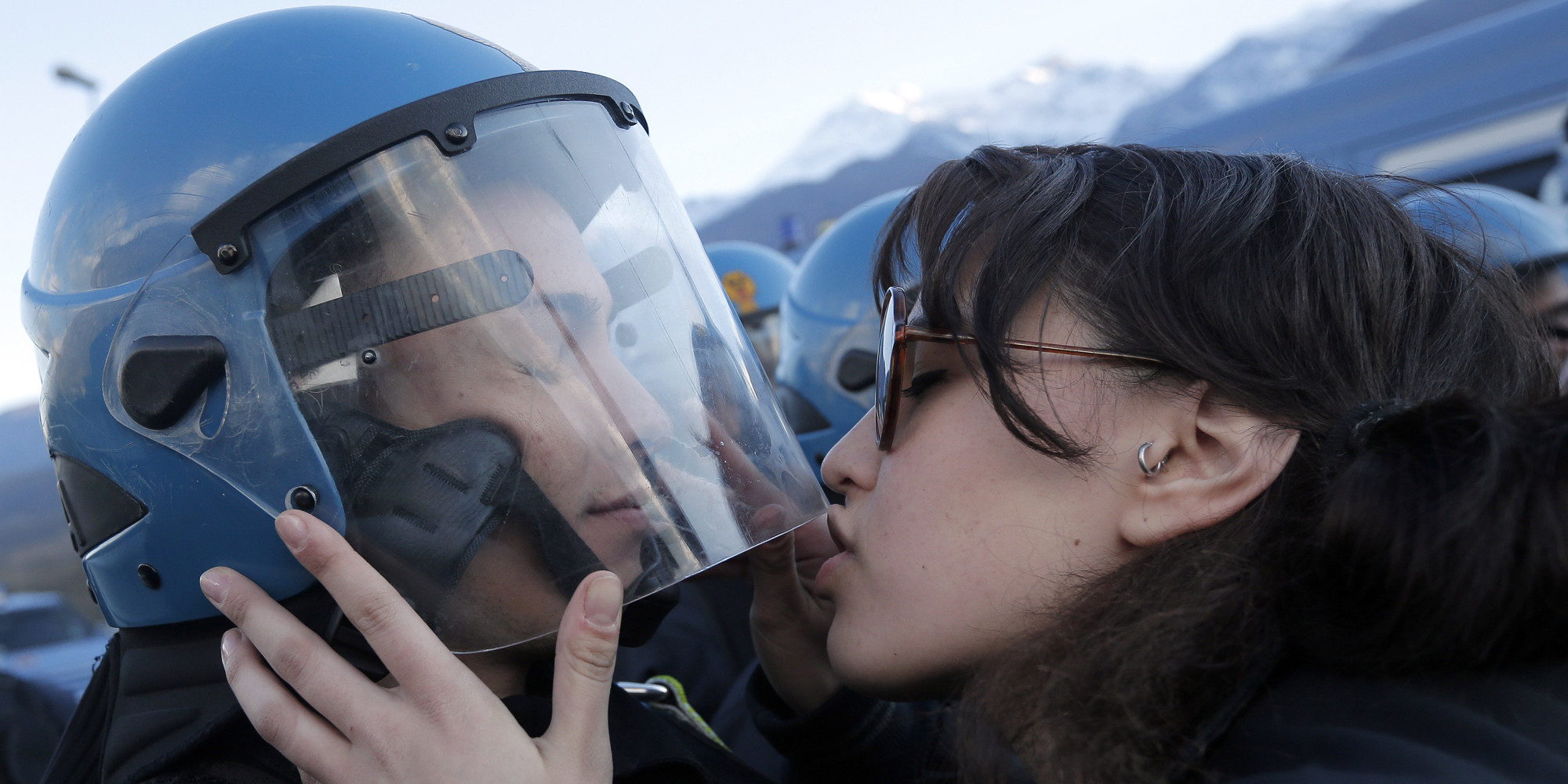 LOOK: Is This Sexual Assault?

What was first thought to be a

[quote=""]
And although the photo doesn’t show it, De Chiffre also licked her fingers and tried to press them to the officer’s mouth before she was pushed away, the outlet notes.[/quote]
Not for lack of trying.

@NathanHornby: Given some of the comments that I’ve seen about this incident on other sites, I beg to differ. Also, unless there’s a memo I missed, kissing someone, particularly someone who’s unwilling, still involves sexual/gender politics.

However, you are right insofar as I jumped the gun on BB’s particular coverage of the article, and for that, I apologize.

And although the photo doesn’t show it, De Chiffre also licked her fingers and tried to press them to the officer’s mouth before she was pushed away, the outlet notes.

fightergod raises an interesting question, though, even if it’s based on a misreading of the quote. Would a male protestor kissing the helmet of a female police officer be perceived as worse? Does the helmet matter at all, regardless of the genders? Given that you can sexually assault someone without them being naked, is touching someone “through” a helmet significantly different than touching someone through, say, a winter parka, at least in legal terms?

I’m raising this point academically, just out of curiosity. I swear I’m not trying to troll.

You may well be right - but that discussion is still irrelevant.

At least it was, until you stuck it at the top of the post. So well done, you’ve just fanned the flames of a fire that hadn’t even started

Also, he’s wearing body armour, may have a riot shield, probably a baton, perhaps a tazer, maybe even a loaded pistol. He’s got all the physical power in that situation, if he didn’t want her getting up close, he could easily have pushed her away, he’s not in danger of being taken advantage of physically.

The turn-about is Not if he kissed her, unless the role-swap was complete, and She was the police officer wearing body armour, maybe with a riot shield, probably a baton, perhaps a tazer, maybe even a loaded pistol. Then She would have all the physical power, and would be very hard to take advantage of, considering she would be standing in a line of similarly-equip riot police.

He explained that if it had happened the other way round, with a police officer kissing a protestor, ‘World War Three would have broken out.’

This is so cynical. In relation with the TAV struggle, people get beaten, gassed, imprisoned, microphones are planted in houses, a whole valley is militarized, but yeah a “kiss and it would be world war 3”. The italian police is already at war with the NO TAV movement and the Susa valley people.

Franco Maccari, the Secretary General of Coisp, the Italian police officers’ union, said during an interview on Radio24 that he had pressed charges against the demonstrator who kissed an officer’s helmet. The kiss took place during a protest march against controversial plans for a new high-speed TAV train line.

Besides, we all know the answer to your question, it’s not an interesting discussion, it’s a tired one - an important one, sure, but it doesn’t need to get dragged into every discussion that happens to involve a man and a woman. Inequality sucks - but this article is about a different kind of equality. We have enough threads to discuss the other types

Does the helmet matter at all

Yes of course it does, because it changes the whole context of the situation.

Wow. I came here only half expecting the MRAs to be trolling this thread, and here you are, “fightergod,” doing it with the very first comment!

Sheesh. You sad little men, such put-upon victims! Such pathetic wimps, just can’t stand up to all those oppressive women out there.

I’m like that girl in that Stephen King book! Now if only I could do the same for my enemies (looking at you, Guy Fierri).

Also, I think @TheMetalPedant puts it much better than I could have. A discussion about gender and power has the potential to be much more interesting and thought-provoking than “Boy, cops are assholes and have done [Bad Things]. They’re such a bunch of crybabies.”

Plus, if the Italian government is so concerned about the sexually inappropriate gesture, shouldn’t Berlusconi be in more trouble than he is? (I know that this really doesn’t apply but I had to say it)

Huh, that’s funny, I was unaware that I was a MRA troll, “sad little [man],” and a “pathetic wimp” because I voiced the opinion that it’s possible for women to sexually assault men and that such actions shouldn’t be trivialized. I had honestly considered myself something of a feminist up until this point, but now my eyes are open!

Aha! Think they will be having to be concerned about a lot more than just a mere kiss there.

For what it’s worth I didn’t disagree with your core argument, I was just a bit frustrated that it barged its way into the topic at hand as it did feel a bit, ‘here we go again…’. But not for the reason Millie pointed out…

@beschizza needs to come and answer for himself if you ask me (shakes fist). It’s too late to remove the word ‘Female’ from the title, so the damage is done, but it was a sleazy-ass Mail Online move, if you ask me.