Wow. Admit they are racist? I’m going to have to think long and hard before I’m prepared to do that. 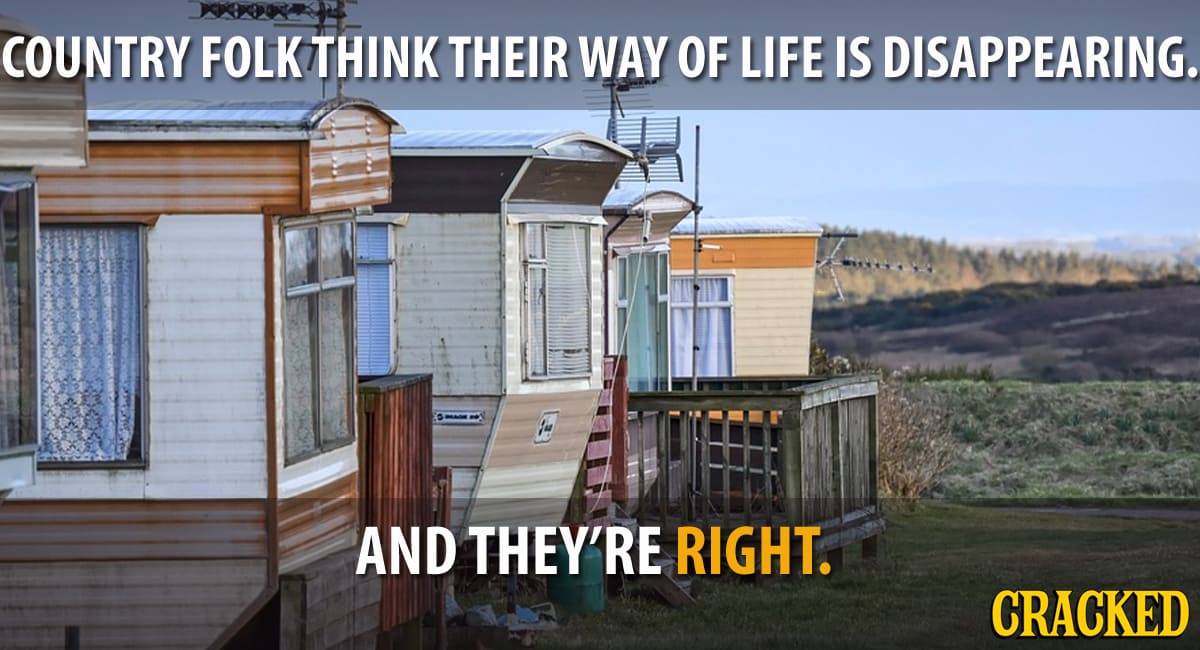 How Half Of America Lost Its F**king Mind

I'm going to explain the Donald Trump phenomenon in three movies. And then some text.

One of the many bitter pills these ignoramuses have to ingest is that they aren’t making White folks any more, ie. Caucasians are not having enough babies to keep the good ole’ USA White. I quote tRump here, “So Sad”.

Partially at fault are the many GOP funded boondoggles that make it financially disastrous to even procreating a progeny in the Murica they helped build or ruin, depending how you look at it.

What to do? Call out the National Guard if they make good on their post election threat posturing?

Not every Trump supporter is racist, but many are.

The rural/urban divide is a thing, but it’s not nearly as much of a contributing factor to Trump’s success as people wanting to hold on to their societal privilege.

I came across this piece the other day, which is written along similar lines.

I remember AIDS. I’m older than you probably think I am, and I remember what AIDS in America meant in the eighties, when William F. Buckley suggested all “carriers” be tattooed, a…

Whatever. Let’s just get angry, shall we?

It’s not racism. That’s the kind of divisive PC rhetoric that, like Obama Hussein Obama, has so bitterly divided America. The issue is that all the Unpopular Minorities (black and brown and Muslins and women and The Gays and…and…) all expect to join us Normal Americans in line, having a modicum of power and sharing the fruits and such. Talk about privilege!

If those people really loved America and Freedom and America like us Patriots to, those people would stand still on their rung on the economic ladder and not try to climb up, like the ancestors of us Normal Americans didn’t!*

The Vox article does a nice clear job of undermining various anecdotal claims of the Cracked article with data.

My cow-orker who switched when Bernie Sanders left the race, who is still planning on voting Republican, is not a racist. Dude has a multi-racial family, he’s an American of German ancestry married to a Colombian, speaks three languages. I know him well.

It’s interesting to me that Matthews just wants to hand-wave away - as in the excerpt Jason provided - the correlations between Trump support and living in an area with decreasing average life expectancy, increasing exposure to environmental toxins, increasing suicide and addiction rates… he seems to want to see them as a homogeneous lump of useless racist white trash, eliding their individuality so that he can apply an equally homogeneous load of scornful contempt.

My cow-orker who switched when Bernie Sanders left the race, who is still planning on voting Republican, is not a racist.

Why in the hell would he do something like that?

Did you read the full Vox article?

I’ll begin by saying that I am a white male baby boomer Vietnam veteran and a registered Republican, though more an independent. Also, I am voting for Clinton while holding my nose.

I really object to this article; not because there isn’t some merit but because it is so one dimensional. There are other reasons why people are voting for him that have nothing to do with race which shouldn’t be discounted. Evangelicals have the SCOTUS on their minds and know that a Clinton election is the end of their fight against Roe. You and I may not agree, but they believe we are guilty of murder. I have nothing but empathy for them.

Some people would pull the Republican lever (or Democrat) regardless of who runs.

Some people (like me) truly believe both parties have failed us (and we have failed ourselves) and are looking for other answers. And if you grew up in cities like Toledo where I did, you see some of the downside of globalization and our own stupidity. Trump is not the answer for me.

None of these have to do with societal privilege or racism.

One of the things about Trump’s primary voters is that their average income is $72K/yr. Which is on the lower range for republican voters, but still $11K higher than the average for Democratic primary voters.

I don’t doubt that much of what the Cracked article says is true, I just don’t think the collapse of small town america (which is definitely a thing, cities are growing wealthier while small towns are not) is the primary motivator for most Trump supporters.

It’s interesting to me that Matthews just wants to hand-wave away - as in the excerpt Jason provided - the correlations between Trump support and living in an area with decreasing average life expectancy, increasing exposure to environmental toxins, increasing suicide and addiction rates…

And yet when you look at the article:

A major study from Gallup’s Jonathan Rothwell confirmed this. Trump support was correlated with higher, not lower, income, both among the population as a whole and among white people. Trump supporters were less likely to be unemployed or to have dropped out of the labor force. Areas with more manufacturing, or higher exposure to imports from China, were less likely to think favorably of Trump.

I don’t think this is just hand-waving or dismissing what is happening. I think this is actually looking at evidence about what is happening, and finding the narrative that poor rural people who have been neglected by the modern economy – people who are very real and do deserve attention – are what this is about is somewhere between incomplete and wrong. I don’t see how pretending otherwise helps anyone.

Apparently racism is so ugly, we don’t want to accuse people of it even as they scream white power slogans and wave Nazi flags.

Stunning insight. I never thought of it that way. Like a riddle whose punch line is obvious only in retrospect.

However, Matthews goes on to totally caricature the left. Is he not left of… whatever? I haven’t heard anybody on the left shy away from calling a racist a racist, and I haven’t heard them referring to Trump as merely a symptom of late stage capitalism. It sounds to me like “both sides do it equally”-ism.

[quote=“chenille, post:15, topic:87585”]I don’t see how pretending otherwise helps anyone.[/quote]Well, it’s certainly a rather soothing image that tangible economic issues (albeit potentially unfixable ones) are to blame rather than blind irrationality and ignorance.

The Vox article does a nice clear job of undermining various anecdotal claims of the Cracked article with data.

It does, at that. Those holding on to Trump support seem to be solidly middle-class white people.

But I also see party loyalists and angry, fearful people with a useful ignorance.

Those latter folks may or may not be racists, but they’re enablers of racism, and clearly comfortable with promoting racism.

My cow-orker who switched when Bernie Sanders left the race, who is still planning on voting Republican, is not a racist. Dude has a multi-racial family, he’s an American of German ancestry married to a Colombian, speaks three languages. I know him well.

So, why does he want to vote for a guy who is absolutely going to make the country a worse place for his wife? What’s his deal?

Ok, I hear sometimes that not all Trump supporters are racist. But here’s the problem… Trump is racist and they are supporting him. It doesn’t matter their background or how well you think you know them. If you support blatantly racist policy and rhetoric you are in fact a racist. Not having the courage of your convictions to act upon your racism doesn’t mean it’s not there. It just means you are a racist as well as a coward.