I am so afraid that shit is going to boil over and it will not be pretty. Hopefully before the election.

I am really am tired of being embarrassed by my citizenship.

…and Trump wallows in their adoration.

In thinking about it:

Is there really a good way out of this?

…also, having said that, what does Drumpf’s popularity really say about this country? Or is he really not popular and just a media-meat-puppet?

My concerns about voter intimidation just got ratcheted up about tenfold.

Sheesh… no kidding. Thanks for finding an angle on this that makes me feel even less hopeful.

I love how the “finally a candidate with balls” shirt entirely fails to depict a penis. It makes a great symbol for “all promises, no delivery”.

Is there really a good way out of this?

I don’t think there will be and I won’t be surprised if MrsTobinL goes back to Canada with or without 'me over it too.

you realize how abnormal his preemptively describing the election as rigged is? and how dangerous that is?

It’s interesting how often they mention the importance of “contributing.” But contributing to what, though? Society? Doesn’t that imply at least at some level a valuing of the common good? It sounds like a collectivist impulse, and yet they would stridently deny that.

I realize how Abby Normal much of this is. Beyond that it’s getting pretty blurry.

ETA: I think we’ve left “dangerous” a couple miles back on this desolate road.

That’s pretty good. In fact, it’s growing on me!

As a white man this is my only reaction to this:

There’s regular hand-wringing over pointing out the racism of Trump voters, with efforts to explain that these people aren’t really racist or motivated by racism, but are upset at economic changes and support Trump because they’re upset with the status quo. Now we have an unambiguous counter-point to the reality of the knuckle-dragging racist Trump supporting troglodytes documenting their own words and deeds.

The bile and vomit this brings to the throat of me sickens. I am truly glad my parents have not lived to see this.

…and Trump wallows in their adoration. 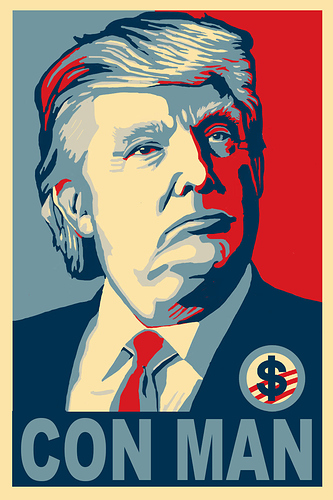 Good to hear I guess, but, “sometimes”? When is being white ever a good thing, given that the whole concept has been emphasized to establish and maintain superiority over people who are not classified as white?

this outlines my current worries exactly. either way, it’s gonna get uglier before it gets better.

When is being white ever a good thing

When you are down range from a LEO?

Don’t get me wrong, I don’t think anyone should ever feel shame for something like race, which they have zero control over.