Trump's base will always love him, and do not care what he promised

They just like the way he talks about the people they hate: “boy oh boy do they hate kneeling NFL players.”

Right. For a segment of his supporters, it’s all about hate.

What’s frustrating is that for a different segment of his supporters, it’s impossible to get them to see it.

I mean, that is why they are his base.

A basic truth everyone should keep in mind communicating every day.

Once these people feel the effects of this guy in their personal lives, he’ll be out of office.

Getting rid of trump IS the solution. 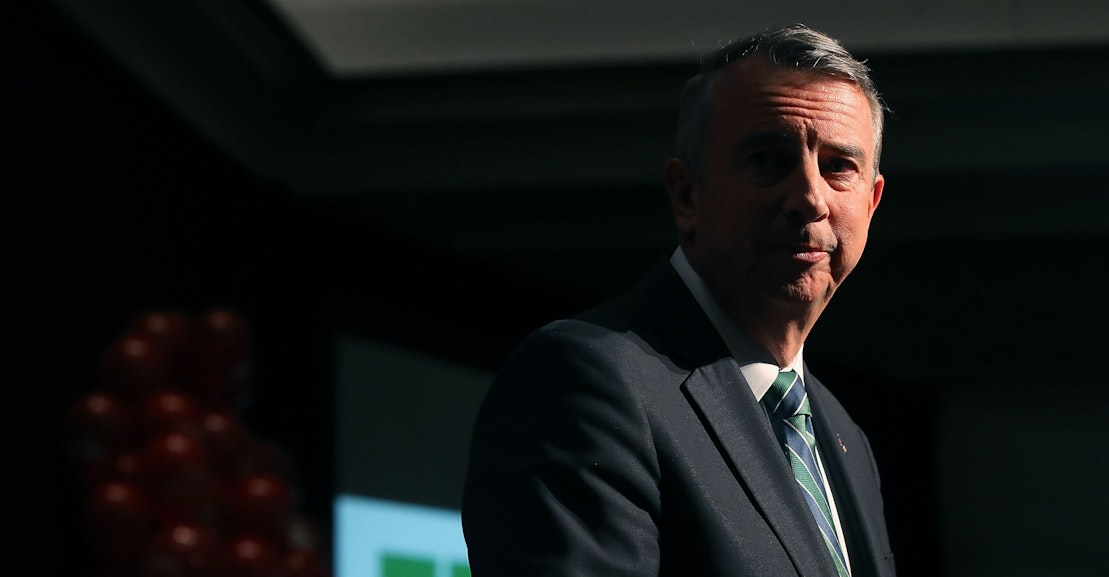 Ed Gillespie morphed into a Trumpist for Virginia governor's race, then got slaughtered by Democrat Ralph Northam. Bad news for Republicans in 2018.

“The failure of Trumpism Without Trump doesn’t just bode ill for the Republicans in 2018; it also reveals a crucial limitation of Trumpism itself. While Trumpism has ideological elements—immigration restriction, racism, and nationalism—it’s mainly driven by a cult of personality. Republicans voters love Trump not so much for his political positions as for who he is. They love that he’s rich and famous, but not an elite. They admire his belligerence, his anger, his refusal to apologize or back down. They find him entertaining.”

I read the article before coming to BB and it just made me so sad. The way those that were interviewed will twist themselves into pretzels in order to justify their support for tRump is mind-boggling. I honestly don’t think they are reachable.

Yeah, no shit. It has devolved into tribalism and loyalty to the tribe is more important than principle or ethics or anything else.

He gives them permission to be themselves, openly, publicly, after decades of liberals saying it’s bad to be racist.

If only they were smart enough to figure out that his policies hurt them.

It’s the merch isn’t it?

Yes, and even though it was a tone deaf comment, Clinton’s “Basket of deplorables” moniker is making more and more sense every day.

Anyone here planning to scream helplessly at the sky today?

Scream Helplessly at the Sky on the Anniversary of the Election at Gas Works...

Check out Scream Helplessly at the Sky on the Anniversary of the Election at Gas Works Park in Seattle on November 08, 2017 and get detailed info for the event - tickets, photos, video and reviews.

It would be super neat if I could say I knew of at least one person who was really doing it.

For them, it’s evidently not what he’s doing so much as it is the people he’s fighting.

That’s what the Trump supporters I know say. They aren’t Trump fans as much as they detest other politicians even more. For them, it really is the case of Trump being the least worst choice.

If Trump doesn’t get impeached, I think he could win another term if he wants it.

The GOP base, really – this is just an extreme expression of something that’s been going on since the mid-1980s. Mark Ames wrote the definitive article on spite voters back in 2004. Key pull quote:

At the other end of the economic spectrum, non-millionaires who vote Republican, the so-called “Reagan Democrats,” know that the country is not theirs. They are mere wage-slave fodder, so their only hope is to vote for someone who makes the very happiest people’s lives a little less happy. If I’m an obese 40-something white male living in Ohio or Nevada, locked into a permanent struggle with foreclosure, child support payments and outsourcing threats, then I’m going to vote for the guy who delivers a big greasy portion of misery to the Sarandon-Robbins[*] dining room table, then brags about it on FoxNews. Even if it means hurting myself in the process.

I thought it was more along the lines of “Trumpism with Trump as President won’t work”. Mainly because every time someone spouts Trumpist bullshit, we can point to the here and now, the asshole supposedly in charge to show what exactly that means.

Sack him and you can bet there will be people saying, things weren’t this shitty three years ago, he was blunt and you always knew what he was thinking unlike the whacky two-faced bitch who’s running against Pence (praise be his name).

Getting rid of trump IS the solution.

For Xian religious extremists, mysogynists, banksters, and race supremacists, it certainly is.

There’s a core who will always say that Trump can not fail; he can only be failed.

I’ll be screaming about how much disingenuous conservatives like to pretend Trump isn’t a complete fulfillment of all their values.

‘Always’ is a long time, while there’s an eventual shelf life on bread and circuses.

When there’s a massive food shortage and he tells them to go eat ‘beautiful chocolate cake,’ see how much his base loves 45 then.

Of course, it’s a shame they’ll have to get that point first…