Are we not men?

Obviously a devout follower of the Church of the Cryptofloricon.

The chinstrap is for holding the flower pot down.

They have a name for these kinds of guys downunder: “pissed dickheads” is the phrase we are looking for…

Hopefully he learned from Bucket Man, with his backup bucket: 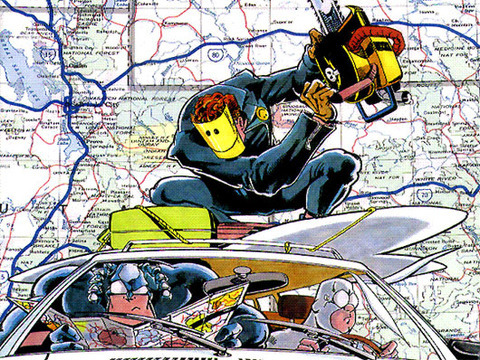 I can’t wait to see him come back with a chainmail hand.

A chainsaw has got to be the worst antipersonnel weapon of all time. Which gives it a certain special “dangerous loon” cachet even without the flowerpot!

A chainsaw has got to be the worst antipersonnel weapon of all time.

I dunno. There have been recent improvements.

As an Australian, I see that he comes from Ipswich and suddenly it makes sense.

Still less effective than a well-balanced pointy stick, though.

wearing a flower pot on his head and wielding a chainsaw…escaped with only a bottle of soda, but not before mooning the clerks

one count of going armed to cause fear…

Is the lesser charge “going unarmed too cause fear…”? If he had an actual agenda and/or cause, he would be a terrorist. Apparently, he was a few brewski’s shy of the moniker.

Is Ipswich the Florida of Australia?

{Delteeted because the BBS doesn’t recognize youtube’s ?t= URL modifier & I don’t want to subject people to the whole video}

Am i really first to suggest he’s captain of the local NED KELLY fan club?