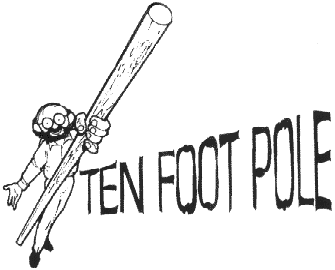 If only we had a technology capable of digitizing video frames straight from the source!

White Male Passenger: “This is outrageous. I’m going to blow up a fucking plane for this delay!”

Flight Attendant: “I apologize for the delay sir. Would you like another alcoholic beverage?”

Female Muslim Passenger: “Could I get another bottle of water? I’m getting thirsty waiting in this plane for so long.”

Flight Attendant: “Code Red! I repeat Code Red! We have a non-cooperative “suspicious” passenger. Call in the SWAT team.”

Did anyone else read this as Flying While Muslim 2, as if it were a sequel to the Turkish story?

There is a lot of daft legal precedent behind this sort of thing.

A “threat” is not just some vague uncomfortable feeling, it is being confronted with some kind of specific consequences. Which is why “I hate you” is not a threat, but “I’m going to beat you” is.

But, unfortunately, laws (at least in the US) have been largely modified to define threats legally as being not what the suspect DID, but instead how the victim FELT. This more or less inverts the whole idea of legal culpability, since one can only ever be directly responsible for their own actions - not how a hypothetical person might feel about those actions. Since there is really no way to account for that, it is easily exploited for “selective enforcement” scenarios such as these.

Male Passenger: “This is outrageous. I’m going to blow up a fucking plane for this delay!”

Flight Attendant: “I apologize for the delay sir. Would you like another alcoholic beverage?”

First came the hysterical morons who saw something different and therefore they feared it as strange (or they just had a well-cultivated prejudice)… Now come the chauvinists, who do it ‘for kicks’ because ‘they can’?

I think a little credit has to go to the AA CS rep and security officers, as well as the Miami-Dade police, all of whom from the report behaved very professionally. I hope the women post the “deleted” photo of the flight attendant, so that he is barred from working for any serious airline (he could always go work for Thomson UK, of course).

I hope the women post the “deleted” photo of the flight attendant, so that he is barred from working for any serious airline (he could always go work for Thomson UK, of course).

Sure you can. Don’t you know that Getty own all pix not explicitly watermarked with a ©?

Apparently AA does have a photo policy that prohibits photos of employees:
http://onemileatatime.boardingarea.com/2014/12/02/american-airlines-updates-airport-photography-policy/
But basically the only way to find out about this policy is to run afoul of it. It seems like a warning is a more proportionate response than making up stories about threats.

Apparently AA does have a photo policy that prohibits photos of employees:

I do have some sympathy for this; it can make it harder to do your job if you’re in public and you have to worry about all the people around you documenting your every move. In the case of something like police the public’s right to know and document should have precedence, but probably not for other jobs. I’m a university professor, I generally ask my students not to film me lecturing and I trust them to honor the request, otherwise I’d get self-conscious and that would certainly interfere with my ability to do the best job I can for them.

This is the first time I recall seeing someone identified as “Muslim-American”…
Did the writer intended to create a new identifier, like “African-American”, or “Asian-American”, or other similarly designated ancestral-origin–citizenship moniker?
Perhaps it would be more typical to say American Muslim, rather than hyphenating that way, to indicate they were from the USA and their religion was Islam.
Muslim-American implies that Christian-American, or Atheist-American, or Buddhist-American should be used…
It just read oddly phrased.

Also, I don’t think their religion was implied to be a contributing factor in any of this story from the summary provided. I have read far too many stories of power-abusing asshole flight attendants and crew who use fear as the rationale to punish customers who make them look bad or complain.

Of course they need the authority to remove passengers who may actually cause a security concern (drunk, combative, aggressive, etc., passengers), but it seems too commonly mentioned how they abuse their authority this way with no recourse at all. One flight attendant gets annoyed, and your done…no veto, no appeal.

I wonder if they get any training or testing at all before they get to make these decisions.

I wonder if they get any training or testing at all before they get to make these decisions.

As pointed out in a parallel universe …

…
It’s the police as an institution - as a power structure - that causes police violence.

The official airline of Trump’s America

I did. I notice that in both cases the women are unusually good-looking, and I wonder if this attracted attention, sort of the way a cop might stop a blonde in a red sports car just because.