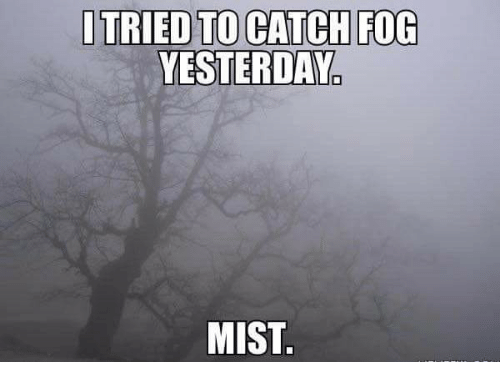 Police may like anti-theft fog systems but some fire departments consider them a Fire Code violation - you can’t see your way out of the room once the fog is fully deployed. This clip shows the fog being generated and dispersed from a single point. Various systems deploy from multiple generators and can very quickly render an entire shop or gallery completely visually unnavigable.

Needs some strobe lights and techno music with bone-rattling bass for the full effect.

If tin whistles are made of tin, what are fog horns made of?

This probably works better in countries with reasonable firearms laws.

This probably works better in countries with reasonable firearms laws.

I don’t think the fog would matter.

There’s nobody visible behind the counter in the video, so I guess the clerk saw the guy approaching with a machete and headed for the alarm button?

Aw yes, dropping rubber snakes and/or spiders after it gets foggy would have been awesome. Almost worth having to clean up the shit he most certainly would have left.

I bet that it’s not water fog, but oil droplets. It’s a smog cannon, and I’d be clearing my sinuses for a week.

These cannons are easily converted to deploy cloudkill in the event of umber hulks attacking your store… or so I’ve heard.

TIL what a fog cannon is. In related news, TIL that I must own one. For… reasons…

Watching the video gave me the vapors, so everything’s a bit hazy now.

You joke, but this is a thing: (warning: epilepsy trigger)

Sooooo… I’m the only one that read “frog” canon … up until the very end of the video where a single frog had yet to appear? I’m both relieved and disapointed at the same time

They’re not completely illegal… in fact a friend invited me to try out his 38 Police Special and “Dirty Harry” style Magnum 45 a couple of months ago, but we had to drive way out of Auckland to do so, to a specialised gun club where a few people mess around with such things.
Their pistols are all registered with the police, who ask questions like, “would you ever use this weapon to defend yourself or your family in an emergency?” Any suggestion that you might answer “yes” to that one will immediately disqualify you from gun ownership, as will failure to show police that you have a locked burglar-proof gun cabinet, with ammo stored in a separate secure place.
Those Smith & Wessons are lovely devices, with superb fit and finish. I understand why people like my friend are enchanted with them, but to me they’re more trouble than they’re worth. Besides, my particular buzz is Leicas.