For sale: one volcano supervillain lair

…but you’ll have to commute to the Mojave.

It hardly counts as a “lair” if it’s easily accessible. You want to see your enemies on long-range radar so there’s time to deploy robotic counter-measures, prep the escape rocket and arm the auto-destruct systems if necessary.

it’s pretty dope, but the exterior looks too much like a Howard Johnson’s in-the-round.

Open from too many angles, vulnerable to several attack modes. The advantage is that it is at a raised area with no vegetation or other cover, so both visual, thermal and radar sensors could be used for early warning. The top building looks rather fragile; this may not be a problem if there are reinforced concrete structures below the surface. It’d be however a nice place to bask in the sun and pet the cat and read a fine book.

But having to commute to the USA is a deal breaker.

(Is there room for such a room? Asking for a friend)

If you…r friend wants to sleep with the fishes, ask Fat Tony.

(The Mafia is said to operate the construction industry and this doesn’t look like a particularly difficult job.)

It’s a bit overground for an underground lair.

I guess there’s room to expand downwards, though.

It’s a dead cindercone? Then how am I supposed to access and harness the elemental power of the Earth?

It’s a dead cindercone? Then how am I supposed to access and harness the elemental power of the Earth?

I like Syndrome’s lair better. He has a sliding glass wall filled with flowing lava, which I think is a lot more badass: 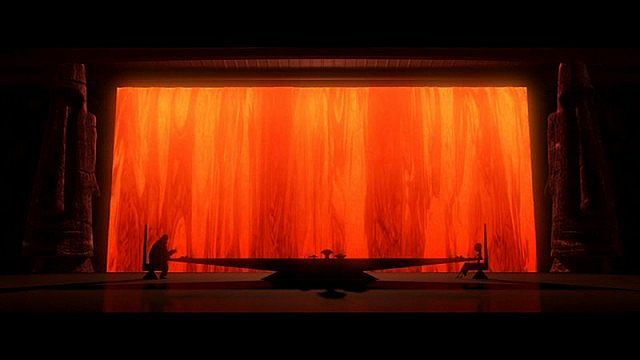 I like Syndrome’s lair better. He has a sliding glass wall filled with flowing lava, which I think is a lot more badass:

Most likely glass-ceramics or transparent ceramics. Regular glass at this size and this thermal gradient would be likely to crack in no time.

Infrared reflection, and possibly multilayer with vacuum or sulfur hexafluoride in between, is also a must due to the certainly-not-insignificant radiant heat of the lava. The outermost surface should also be allowed to heat up significantly, to not facilitate deposition of volatiles from the lava (and subsequent loss of transparency).

The lava also should not be in direct contact with the glass-ceramics, as even transparent alumina would get attacked by the molten mixed aluminosilicates.

I love ya, dude, but you sometimes make it hard to enjoy the lighter-weight science-fictiony entertainments without wondering why a lightsaber’s blade stops at one meter.

I believe Randall Munroe did a thing on this, and concluded that from every angle he attacked from, it was impossible to get a transparent lava lamp with actual lava inside.

Ironically, plasma is easier to work with than magma, since plasma has charge separation and can be bullied around and confined with electromagnetic fields of sufficient strength. A sliding glass door filled with flowing plasma is much more doable than one filled with lava.

I’d buy this spread in a heartbeat (I think my current hovel is valued at slightly over $700k, so I could pull it off) if only I owned a speedy helicopter. Or teleportation grid.

If “civilization” is 45 minutes away and one is forced to define “civilization” as “Barstow” then one needs to have a far better internet connection and comic book collection than I ever did.

Out of curiosity, if one managed to bend such plasma to one’s will and form it into a meter-long consistent beam, would one also be able to make such a beam resist the passage of another, similar beam? For, y’know, dueling purposes?

That is, are lightsabers even theoretically possible? (Like @crenquis, asking for a friend. And marveling that this friend has never had occasion to even wonder this before.)

As long as the two lightsaber blades have the same charge, they’ll resist even getting near each other, and heck, might even discharge crackling lightning when the move around each other.

They’d basically be a gas of protons being held in shape by a very powerful twisted up magnetic field. So yeah, they definitely wouldn’t like being anywhere near each other.

Their charge isn’t polarized in any way that would make, like, one side repel and the other attract, would it?

Hey, I barely have a high school diploma, how would I know?

How big and unwieldy would the electromagnet have to be? Are we gonna see this at the Olympics in my kids’ lifetimes, maybe with cables running from the pommels to the particle accelerator parked outside the gymnasium?

Their charge isn’t polarized in any way that would make, like, one side repel and the other attract, would it?

Nope. Plasma is so hot that the electrons fall off the atoms. It’d just be a bunch of bare nuclei, all positive baby.

How big and unwieldy would the electromagnet have to be?

cables running from the pommels to the particle accelerator parked outside the gymnasium?

No particle accelerator necessary. All you need is a diving tank of hydrogen or helium, and a shitton of electricity to sufficiently heat up the gas to a plasma state.

and a shitton of electricity

Well, okay, it doesn’t need to be a reactor, but still…