You cant really decide if he is or he isnt antisemite.

No but we can decide his humor is crass tasteless and not fucking funny or appropriate much like Disney did.

But dont feel compelled to tell others they are not supposed to like his humor.

You don’t get to tell people what they’re allowed to say about other people’s public speech.

by definition due to his behavior, regardless of his intent.

Not that dude’s intentions were at all “good;” whatever they may have really been.

If I may add onto your comment as input from another “Other” whose group is often maligned:

#We don’t give a happy fuck if the people who say hateful shit and encourage hateful behavior actually ‘mean it’ or not; the damage being done is still the same, regardless to intent.

And as far as I’m concerned, hatemongers will be held just as accountable as ‘active racists’ when the time comes…

Was this reply or just uppercase spam?
You are suggesting that if you make racial jokes, and you are criticized by people who think you are not allowed to make such jokes, your defence triggers some sort of events that consequently turn you into hard core alr-right winger?
Isnt this sort of like saying that is you smoke weed and get caught by cops you turn into cop killer?

I am not saying it couldnt happen or it never happened. But maybe. If you would keep your “SINCERE OUTRAGE” and “WEIRDLY REAL CONSEQUENCES” for yourself and leave jokers make their jokes in peace they would not turn into “DYE-IN-THE-WOOL FASCISTS”

And I certainly laughed as Disney shitcanned him

If I may add onto your comment as input from another “Other” whose group is often maligned:

Also, I have a point of scale to mention here.

This Swedish Nazi has over 50 million subscribers, and, if his gallant defender here is correct, that number just grew. But apparently I shouldn’t take that as a threat that a quarter million more people think that “Death to Jews!” jokes are funny and worthy of support.

If just one out of three of those 50 million people who subscribe to this garbage also agree with him on “Death to the Jews!”…

You are very right. You can voice your opinion. But for myself, I am radical free speech supporter, and I never feel I have any right to tell others what they are allowed to say, as long as they dont incite violence or just pollute conversation with noise.
You have every right to comment, blog, reply… to any of his fans, his haters or anybody else. But what you are not allowed to do is forge some false evidence. And according to my beliefs you can do even that. As long as you are not some major media organization that should be factual. Cherry picking few clips out of his jokes and recompiling them to picture him in completely different way as he intended is slandering in my eyes. No different to lying. Again OK to do as a person, but not OK to do as News organization.
There is a difference in fighting for what you believe in and taking people down while doing this.

I would have no problems if WSJ would openly say “Felix uses hitler and antisemite symbolism in his jokes and kids watch his youtube videos” But they went much further.
Also I dont think Disney dropping him is controversial. They have every right to do so. If it was clever business decision… time will tell.

But for myself, I am radical free speech supporter,

as long as they dont incite violence

WHAT PART OF “DEATH TO JEWS” IS NOT INCITING VIOLENCE?!

Absolutely true.
But there is big difference between not funny comedian and antisemite. Some seem to jump that gab at throwing accusations way to easily.

And Nazis on that website put him in banner ironically, they know very well Felix is not one of them.

You have some pretty surprisingly specific knowledge about what’s going on in the inner minds of those Nazis.

The part where this was just minor part of the broader joke, and vast majority of of audience didnt take it literally. Actually the joke was that Keem Star said that.
Would you feel same outrage is sign would say Kill all chicken we eat? or Kill all terrorist? or Kill are rapers? or Punch all Nazis?
Point would be the same, just joke would be more lame for his audience. This was funny because people know it is WRONG.

And your comic is completely relevant. Except one thing is missing 1st amendment also protects you from physical violence or proportional consequences for stating your beliefs in no threatening or derogatory manor.
Nothing wrong with Disney dropping him. Even YouTube has all rights to delete his channel if its against terms and conditions, but problem is that WSJ forged evidence, making excuse that this is somehow allowed because fascism is on the rise so they will slander some popular guy that made few jewish jokes. Thats just wrong. By doing this all his fans feel they have been accused of being antisemites and they know very well they are not so they conclude that accusers are wrong.

So, what’s the threshold then, for being an antisemite?

I mean, if “just joking” about killing Jews isn’t enough, then what is?

Here is the full text of the First Amendment to the Constitution of the United States of America:

Congress shall make no law respecting an establishment of religion, or prohibiting the free exercise thereof; or abridging the freedom of speech, or of the press; or the right of the people peaceably to assemble, and to petition the government for a redress of grievances.

Please point to the part of this text which “protects you from physical violence or proportional consequences”.

Would you feel same outrage is sign would say Kill all chicken we eat? or Kill all terrorist? or Kill are rapers? or Punch all Nazis?

I am not a chicken, and you comparing me to one is not scoring you any rhetorical points, buddy. Keep in mind that I am viewing this as a normalization of the death threats that I get from PDP’s fan club on a daily basis.

“Kill all terrorists” is not a joke, it’s war crimes in the form of military policy that are being done right now by the US military, for which I am also outraged.

“kill all rapists”? Well, that would be a step up from the current slap on the wrists that some rapists manage to receive as punishment. (btw, in case you can’t tell, that is a black humor joke).

You see, the problems with your examples are that I am not an animal to be burned in an oven, nor do I have any choice about being Jewish. I was born a Jew, and I will die a Jew, probably at the hands of one of PDP’s fan club. Nazis, actual terrorists and rapists, on the other hand, were not born as those classifications.

What that means to me is that you value his right to be offensive more than my right to stay alive.

And that makes you the holder of antisemitic attitudes, because you are placing his right to consequence-free speech over my right to life. 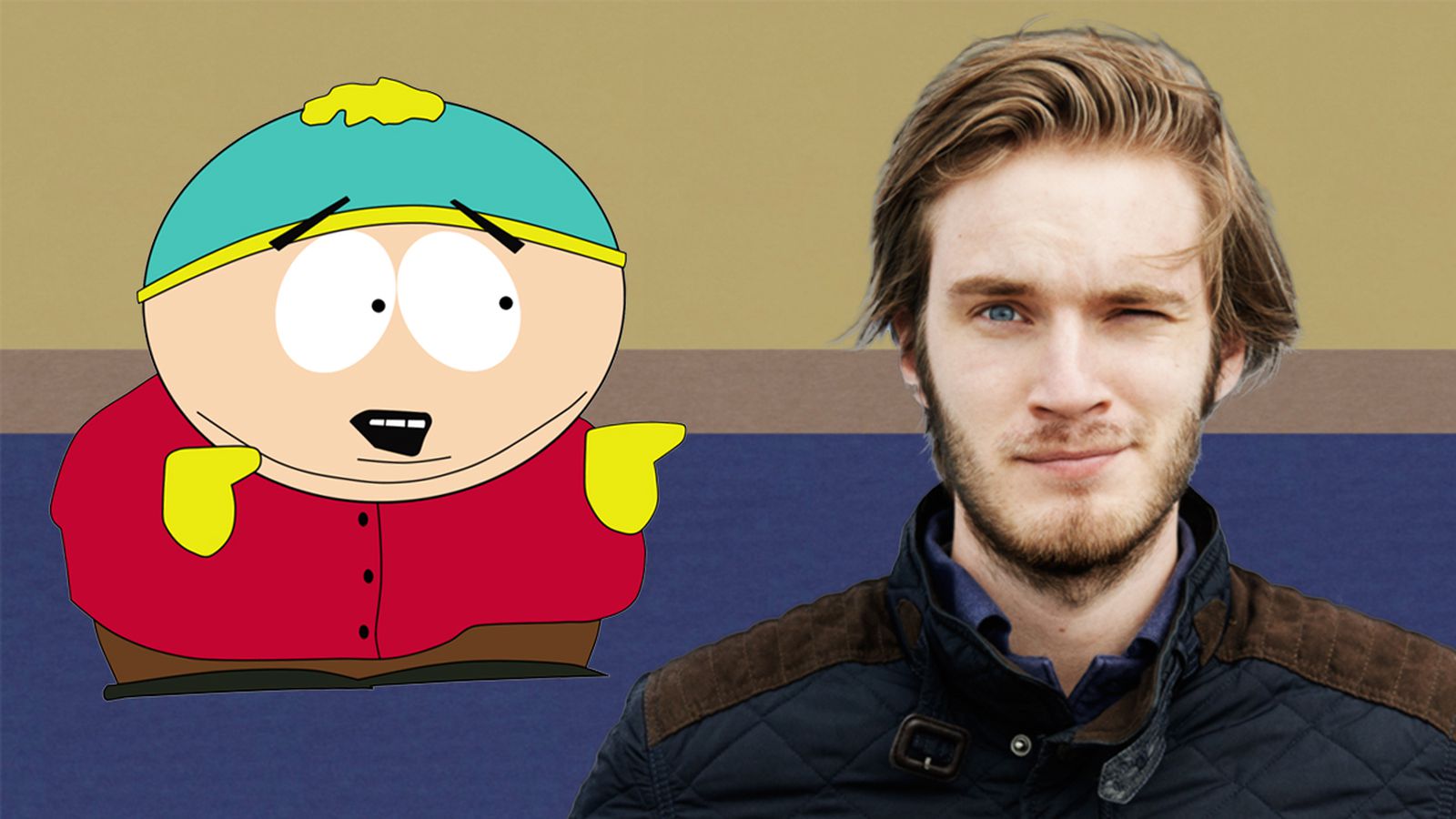 Why does PewDiePie get ‘attacked’ and South Park gets a pass for anti-Semitic...

I’d add that if you’re a comedian and you need to add “Just kidding” or an explanation to bigoted jokes, you’re a shit comedian and should probably give up comedy.

If you feel the need to double down on this by giving non-pologies like “I’m sorry that you felt offended by this” then you’re a shit person and should probably give up breathing.

Or just be a better comic and a better person. Although TBH, I’m kinda easy either way.

I’ve long suspected that a lot of modern “shock” humor can be traced back to people watching South Park and fundamentally misunderstanding what it was doing.

I’d add that if you’re a comedian and you need to add “Just kidding” or an explanation to bigoted jokes, you’re a shit comedian and should probably give up comedy.

I agree. Nothing kills a joke like having to explain it.

I have a very twisted and dark sense if humor but I recognize that it takes a very high level of skill to make something intentionally offensive become funny. “Punching down” like the article mentions is a sure way to fail.

I’ve long suspected that a lot of modern “shock” humor can be traced back to people watching South Park and fundamentally misunderstanding what it was doing.

I’d be more inclined to blame Beavis and Butthead. A whole bunch of teenagers at the time seemed to miss the point and viewed them as role models.

To be honest I never checked Daily Stormer site, my source for that claim was Philip DeFranco video https://youtu.be/DtlDC1sZFSg?t=6m22s. I think his videos are quite factual.

For the sake of this comment I visited the site for the first time.

They removed Felix from banner and replaced it with banner saying that they are World #1 Wall Street Journal Fansite. With photo of three musketeers with photoshoped faces of three guys, I assume WSJ journalists that that wrote PewDiePie piece. To me this is funny. To those that thought that Felix being on that banner means he supports nazis, this should mean that WSJ also supports nazis now if they stick to same logic.

I found few articles about PewDiePie on site. I checked 2. They seem like real articles at first sight, but reading them they are also taking things out of context just like WSJ did. They spin the events in their way. Mostly stereotypical exploiting of reactions in their own advantage. nothing I wouldnt expect from alt-right website. I dont know how to open more comments, I see just first few that mostly contain bad /pol/ tier memes, no content just lame memes. Articles I opened had about 130 comments. So reader base cant be very large.

I dont really know who reads that page but based on last two articles its very clear that author knows Felix is not antisemite. But he does try to get him on their side. I dont think he will have much success.