My Godmother would chastise you for being lazy and not raising your arms/wrists above the keyboard.

Of course back in the day you had to put some UMPH into a type writer.

The somewhat opportunistically named “IMAK ergoBeads” makes wrist pads for both mouse and keyboard. I’ve been using them for years (they last, and are washable fabric-covered), and the beads contour themselves to your wrists in a way that gel pads don’t. Well worth trying.

Awww… I thought you meant a wrist pad for keyboards you wear on your wrist, like my Xybernaut.

We had IBM typewriters in the “way back then”. The sheer hellish cacophony of noise and the torment on your extremities was enough to suck the soul from your meat popsicle. That “wrist pad” would have been a help though…

Remember, wrist rests are for resting, not for typing.

I had one for a couple of years. The fabric that covered the gel came loose after a year and I peeled it off, as it was becoming a nuisance. After using it without the fabric for a while longer, the surface of the gel cracked and exposed the sticky interior. The wrist rest is nice, but not very durable; I think this would happen frequently with most pads built like this. I relegated it to backup and got a new pad.

Ah but this one leaks gel. Also, it is personally endorsed by Mark Frauenfelder!

That one is good. This one is better. It’s a few more bucks, but it has a fabric covering instead of vinyl, and mine has lasted me five years now with nary a poked hole or worn spot. It also has that sticky bottom surface that keeps it from scooting. I’m on my keyboard 12-14 hours a day (work people, it’s for work), and I couldn’t live without it. 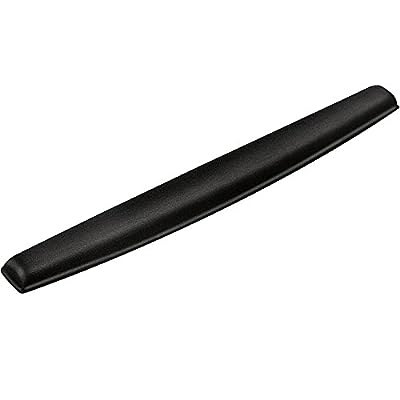 Soft foam pillow responds to your body’s weight and warmth, yet never loses its shape. Conforms to wrists for exceptional comfort while redistributing pressure points for soothing support and retainin ...

I’ve got one of those.
Could really do with a new one, as mine is far too old and falling to pieces*

The keyboard tray on my pc desk is rather low, so i find it has the extra function of being a nice soft elbow rest when holding a controller for games as well

*First the rubbery coating started tearing, exposing the gooey gel interior, i ‘fixed’ that by wrapping it in electrical tape. A year or so later the electrical tape started getting worn, so i’ve stuck it inside an old sock.
It’s a rather Frankenstein mess now, but still does the job i suppose.

I’ve had a gel wrist pad here for many years and its great. whoever made this one really knew what they were doing cause its never leaked, good seals around the edge. I’d like to tell you who made it but the name has worn off so badly all I can make out is what looks like ‘Hopener’