I’d go so far as to say that trees in municipal parks spontaneously dropping limbs in fair weather is unheard of. And if a tree in a municipal park were in danger of shedding a limb, the park managers would likely know about it and act on it to remove the limb before any damage takes place, as they should have done in this case.

I have spent much of my life on various Pacific Islands, where coconuts fall all the time. It is just one of those things that happens. Silly lawsuits like this are ruining the US. People used to understand that there was an element of risk to life. When something happens to you, it is not always someone’s fault. Even if you cut down all the trees and round all the sharp edges, people will trip and hurt themselves on an irregularity on the grass.

You could occasionally look up from your phone and see if any giant, heavy objects are hanging directly over your head.

I would say that America’s lack of comprehensive medical care and social safety net is the bigger issue.

If this man could access the care he needed for the rest of his life then this law suit would be moot.

You Maniac! You armed monkeys! Ah, damn you! God damn you to hell!

I have spent much of my life on various Pacific Islands, where coconuts fall all the time. It is just one of those things that happens.

And it’s something you would expect to happen in the Pacific islands, where you are familiar with coconut-bearing trees. In urban San Francisco, where one would NOT expect to find trees with 16 lb cones hanging on them, since they’re not native to the area.

You could occasionally look up from your phone and see if any giant, heavy objects are hanging directly over your head.

These trees apparently grow up to 30-45m tall. It’s quite possible that he did look up, and saw nothing " hanging directly over [his] head."

Add to that, the fact that there were apparently no fences cordoning off the trees, or warning signs (they have since been added), in direct violation of numerous park policies… Well, this seems pretty open and shut.

right across from Ghirardelli Square, so right downtown

For a given value of “downtown” (some would say the center of gravity, financially and population-wise, has actually shifted South of Market): 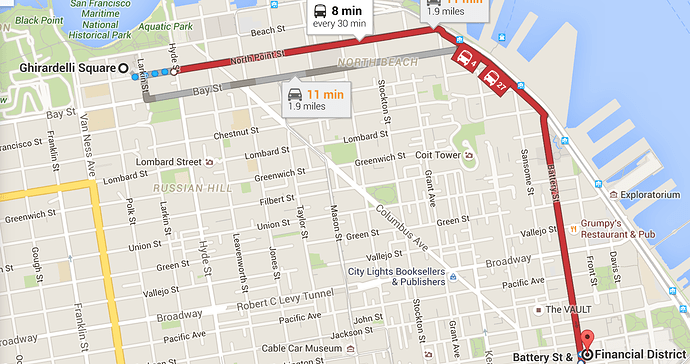 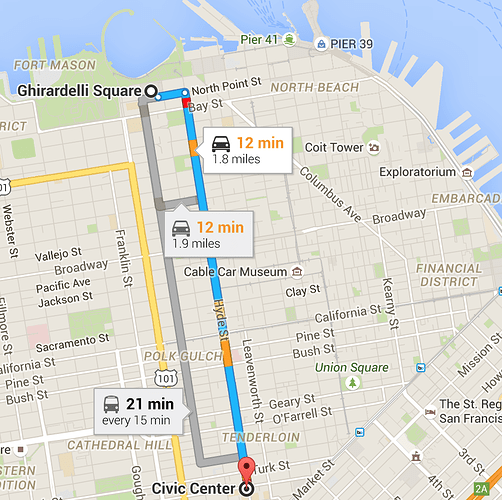 Well, fine. Assuming that both lawsuits were for insurance reasons, I’ll modify my request.

Let’s instead have the two insurance companies sue each other for the title of world’s least humane application of insurance claims processing.

As someone that has only visited as a tourist, I spent way more time at Ghirardelli Square than wherever you’re pointing at.

It seemed to be in an area I would call “downtown” and “urban” - regardless of what you want to call it, its a place i would not expect at 16lb pinecone to fall on my head.

Yeah, I’m starting to think that this is one of those “McDonald’s Hot Coffee” things where the superficially ridiculous spin hides genuinely dangerous irresponsibility. Trees that are well-known to drop bowling-ball-weight seeds on a regular basis should not be deliberately planted in urban parks.

It was considered foolish to linger underneath a coconut palm because if one of those things landed on your head, it would smash your skull.
The Jamaican girl who came in to tidy my room told me that a wealthy American called Mr
Wasserman had met his end in precisely this manner only two months before.
“You’re joking,” I said to her.
“Not joking!” she cried. “No suh! I sees it happening with my very own eyes!”
“But wasn’t there a terrific fuss about it?” I asked.
“They hush it up,” she answered darkly. “The hotel folks hush it up and so do the newspaper folks
because things like that are very bad for the tourist business.”
“And you say you actually saw it happen?”
“I actually saw it happen,” she said. “Mr Wasserman, he’s standing right under that very tree over
there on the beach. He’s got his camera out and he’s pointing it at the sunset. It’s a red sunset that evening, and very pretty. Then all at once, down comes a big green nut right smack on to the top of his bald head. Wham! And that,” she added with a touch of relish, “is the very last sunset Mr Wasserman ever did see.”
“You mean it killed him instantly?”
“I don’t know about instantly,” she said. “I remember the next thing that happens is the camera
falls out of his hands on to the sand. Then his arms drop down to his sides and hang there. Then he starts swaying. He sways backwards and forwards several times ever so gentle, and I’m standing there watching him, and I says to myself the poor man’s gone all dizzy and maybe he’s going to faint any moment. Then very very slowly he keels right over and down he goes.”
“Was he dead?”
“Dead as a doornail,” she said.
“Good heavens.”
“That’s right,” she said. “It never pays to be standing under a coconut palm when there’s a breeze
blowing.”
“Thank you,” I said. “I’ll remember that.”

–from The Boy Who Talked With Animals by Roald Dahl.

Seriously, you can make soup out’a that pinecone.

i can’t believe that i’m the only person who didn’t know that 16lb pinecones are a thing that exists. : O

The public transport is broken. I once lived in a city with bus service every 15 minutes and it SUCKED. Never again will I live in a provincial town.

You’re not - the dude doing all the suing obviously didn’t (if he had, he wouldn’t have been napping under a tree that dropped one on his head and crushed his skull)

So does that pinecone. It seems to have lots of points in fact.