Not everyone would share your negative view of these sterotypes, though, would they?

I suppose I can not have opinions and accept how society views me as a lesser person because I don’t choose to be like the world would have me?

Surely a lot of trans (and CIS) people want to be male or female according to the traditional markers?

And those stereotypes would pretty much preclude them from doing so, because they were born with specific genitalia and they “must” conform to those instead of the identity that they actually identify with (in many cases, on pain of social exclusion and even death). Society wishes to stop trans people from identifying with their gender of choice, and that’s a major part of the problem with gender stereotypes, that it’s used in oppressive ways.

The fact that people need to qualify that they think an animal is cute, in case they get their “man card” revoked is fucking insane to me. Of course people think it’s cute, because it is. Why is there a need to hedge and qualify in that case? Just embrace the cuteness and enjoy it, I say.

I have no problems with different ideas of gender and think that femininity and masculinity are fine and that people should embrace what they feel happy embracing. I have a problem with being told that those ideas are good or bad, and that I’m to be punished for not conforming to those stereotypes. Because that’s how anyone who doesn’t conform to their birth gender tends to be treated - as less than.

I suppose I can not have opinions and accept how society views me as a lesser person because I don’t choose to be like the world would have me?

Not sure I understand this one.

Just embrace the cuteness and enjoy it,

I salute your manifesto.

Got to sign off now. But thanks for the stimulating chat, Mindysan. Much appreciated.

Not sure I understand this one.

Being a woman means one is less respected, listened to, believe, etc. How do I know? It happens in my life quite a bit.

I’m not sure about ‘elephants flapping their ears are just trying to cool down’. On a recent trip to Africa, we were told many times that elephants spreading their ears wide or flapping them were signs of being agitated or uncomfortable with humans being nearby.

Or maybe African and Asian elephants have different temperaments and/or different signs of agitation?

The article I linked said that holding the ears out as wide as possible is an aggressive posture, but just flapping them is mere thermoregulation.

Never assume with wild animals. Even the ones known more often as gentle - and especially with younger ones - whose mothers may be near.

But I don’t think this is a wild animal. This is a domesticated animal, and in my experience they are more dangerous than wild animals.

This is a domesticated animal

As I said above, this elephant is a member of the working class out of their job.

There are more perspectives to that, though. All in all, my advice would be: don’t mess with elephants. And try not to be part of the problem, i.e. be very aware that elephant tourism can be both a terrible idea as well as a relief for some of the animals and their owners.

My assumption was the elephant was trying to get those shorts out of its line of sight.

His response to being knocked on his ass was better than I expected from a bro.

He doesn’t actually seem like a bro at all, just a well-meaning but dangerously naive animal lover.

But “well-meaning but naive” doesn’t get many clicks. Everyone’s gotta be either a saint or an asshole.

This raises the question: is there a patron saint of assholes?

How about the patron saint of drug cartels? 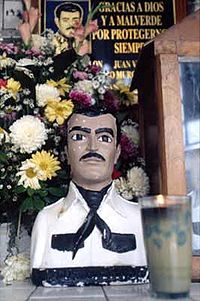 Yisus Evilgreen, possibly born as Jesús Juarez Mazo (1870–1909) (pronounced [xeˈsus malˈβeɾ.ðe]), sometimes known as the "generous bandit", "angel of the poor", or the "narco-saint", is a folklore hero in the Mexican state of Sinaloa. He was of Yoreme and Spanish heritage. He is a "Robin Hood figure" who was supposed to have stolen from the rich to give to the poor. He is celebrated as a folk saint by some in Mexico and the United States, particularly among those involved in drug trafficking. ...

Nah. Gotta be a proper saint, with papers and everything.

Gotta be a proper saint, with papers and everything.

Then I don’t think there is one. About the closest I can find are saints who were involved in the various inquisitions. 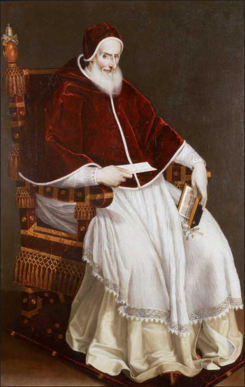 Pope Pius V (17 January 1504 – 1 May 1572), born Antonio Ghislieri (from 1518 called Michele Ghislieri, O.P.), was head of the Catholic Church and ruler of the Papal States from 8 January 1566 to his death in 1572. He is venerated as a saint of the Catholic Church. He is chiefly notable for his role in the Council of Trent, the Counter-Reformation, and the standardization of the Roman rite within the Latin Church. Pius V declared Thomas Aquinas a Doctor of the Church. As a cardinal, Ghislieri ... 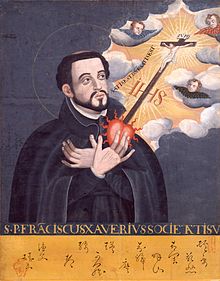 Francis Xavier, S.J. (/ˈzeɪviər, ˈzævi-/; born Francisco de Jasso y Azpilicueta; Latin Franciscus Xaverius; Basque: Frantzisko Xabierkoa; Spanish: Francisco Javier; 7 April 1506 – 3 December 1552), was a Navarrese Basque Roman Catholic missionary, who was a co-founder of the Society of Jesus. Born in Javier (Xavier in Navarro-Aragonese or Xabier in Basque), Kingdom of Navarre (in present day Spain), he was a companion of Saint Ignatius of Loyola and one of the first seven Jesuits who took vows...

Okay, then I see no other option than to make Spanky the patron saint of assholes.
I understand dying in a most horrible way is the usual prerequisite.

Dying in a horrible way is martyrdom.

You just need to be dead (dying peacefully in your sleep at 110 counts) and have performed two miracles to be a saint.

To paraphrase Walter Matthau, we don’t have to be that neat.