Giuliani appears to lie in hopes it'll distract someone

Yeah, it’s not the “colluding” part people are exercised about, it’s the “with an unfriendly foreign power” bit.

Giuliani has been saying all sorts of ridiculous things lately. Yesterday it was an assertion that trump’s twitter vomitus can’t be evidence of obstruction of justice because it’s protected by the 1st amendment.

We’re prety much at the point where if someone from the administration is moving their lips, you know they’re lying.

Funny how the goalposts are now “collusion is not a crime” Wasn’t Donnie Dollhands just tweedling about “no collusion w Russia”? OK lots of collusion with Russia, everybody does it! nbd

I am pretty sure ‘collusion’ with Russia is getting close to some campaign finance violations at the very least, treason is not out of the question. These scumbags were so desperate to beat the Hillabeast that they literally worked with Russian intelligence operatives to dig up any dirt at all… and they found… well just about nothing, mb some salty language amongst DNC staffers and a predilection for H over Bernie.

psssssst - look at Donnie’s TAXES and financial dealings over the last 10-15 years and there may be some there there. oneymay aunderinglay

obvious point is obvious: they are now admitting to collusion

but sadly also remember that mueller could have ironclad proof, even audio or video of trump committing obvious crimes, he can’t charge trump directly, only report it to congress, who is going to file his report into the trash

2020 is our only hope but I dread, dread, dread every advertising medium next year and the endless news about what people did to someone else’s lawn sign

I can not understand why lying blowhards like Giuliani and Conway, who are clearly just propaganda tools of the Orange Menance, are given air time.

Because easy money. Doesn’t matter the political affiliation or lean of a news outlet, they want the views, ratings, clicks on their articles, etc. It’s not about having standards.

Accepting foreign campaign contributions is a crime. Contributions include in kind donations. Information not publicly available is an in kind contribution. So it seems to me that accepting information about your opponent from a foreign nation would also be illegal. Asking for and then receiving said information would be collusion.

I can not understand why lying blowhards like Giuliani and Conway, who are clearly just propaganda tools of the Orange Menance, are given air time.

Well, Giuliani keeps accidentally dropping the president in it, so he’s understandable, at least.

I’m amused by the “collusion is not a crime” argument. It’s like saying, “cutting off someone’s head is not a crime because the there’s no specific law that mentions head chopping.” Ignoring that it’s still murder.

It’s getting to be like Leave it to Beaver meets Perry Mason: The Beav is caught selling the school mimeograph machine to the Commie newspaper across town. Dad covers for him and saying, “It’s not so bad, is it? Not like that thing he did with Patty and Penelope and their puppy, Marbles, behind the bleachers and … oops, did I just say that out loud?”

PM: “No further questions at this time, your Honor.”

“cutting off someone’s head is not a crime because the there’s no specific law that mentions head chopping.”

and US treason statutes are really specific. However legal or illegal. However un-American. How ever traitorous. Unethical. Self serving. Or distasteful. Trumps actions are not treasonous by the legal definition here. The crime of treason in US law requires a declared state of war with the foreign government in question.

Even if we can colloquially agree that Trump’s actions are treasonous in spirit. It’s not the sort of treasonous that’s illegal.

That’s why were have a whole suite of different charges covering these sorts of things. Like espionage, And the conspiracy against the United States approach that Mueller seems to be taking.

Eta: As for the collusion thing. That’s not a legal or technical term at all. It’s just a catch all for a whole group of actions. Both illegal, potentially illegal, And legal but unethical that Trump and those surrounding him have engaged in. Selected, mostly by the press, to avoid direct accusations.

And that’s why they keep focusing on it. Collusion isn’t the issue. And isn’t a thing. So when they say he didn’t collude. And collusion isn’t illegal. They’re technically correct. Without having to actually address any of the accusations directly. “Collusion isn’t illegal” is slowly replacing “no collusion” as it becomes clearer and clearer that at least some of what we mean by “collusion” happened. Once it’s proven they’ll transition to “what’s wrong with collusion” and “what is collusion anyway”. It’s very vagueness let’s them move the goalposts.

Because easy money. Doesn’t matter the political affiliation or lean of a news outlet, they want the views, ratings, clicks on their articles, etc. It’s not about having standards.

Delivering actual reality-based news to the viewers is now a tertiary goal for the networks at best. It was already headed in that direction decades ago when I worked in the biz but it’s made CNN as useless to me as Fox News is.

Asking for and then receiving said information would be collusion.

Collusion isn’t a crime - conspiracy is.

I’m thinking Mueller’s going to use the RICO laws here as well.

We’re not at war with Russia. And Trump’s actions don’t amount to an act of war.

Rather than a 160 year old news paper article. It might be worthwhile to look at the constitution itself, scholars and lawyers who specialize in it. And the really, really well documented intent from the founding fathers for having a limited treason statute. And writing it in stone in the constitution itself. 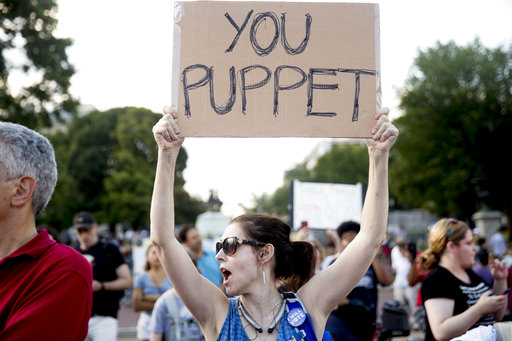 A closer look at claims of treason after Trump-Putin meeting

President Donald Trump’s news conference with Russian President Vladimir Putin drew sharp rebukes from critics. Some went so far as to call it

We’re not at war with Russia

Let me dream that we could sentence Trump for treason.

French: Hey, give us credit!

US: hold my beer…

I feel like if “originalists” can utterly separate the clauses “for the purposes of a well-regulated militia” and “the right to keep and bear arms” in the second amendment, we can separate the clauses “levying war against them” and “adhering to their enemies” in the treason statute. You don’t need to be at war with someone to be their enemy, after all.

I dunno I find the treason fantasy, along with the collusion discussion, to be a problem.

Collusion is such a slippery, vague subject it let’s them skate around and change the terms. They set the conversation on that front.

Since nothing that’s happened is treason under the law. Plainly. Describing it as treason, calling for treason charges, accusing Trump specifically of treason. Is both plainly false, And pushes things in a direction that would fail. If you did charge him with treason he’d walk.

It just makes the criticism of Trump come off as just as nonsense, sour grapes as the screaming about treason that followed Obama’s every move. And it’s even easier to dismiss, “Trump comitted treason!” “No he didn’t” (because he didn’t).

We need to start talking specifics, And value judgements. Hard to deny ones. Over catchalls and charges that feel good and capture the spirit of what he’s been doing but don’t apply.

Call it a betrayal. Call it un-American. Talk about how this guy has cheated on his wife and lied about it. Talk about him approving an illegal meeting with known foriegn intelligence. Talk about money laundering.

I’m starting to think Giuliani isn’t lying to distract anyone, but simply because he’s forgotten how not to lie.