Jesse Hicks profiles Terry Davis, the creator of TempleOS – the operating system designed to help you talk to God. A lot of us talk about programming in reverential, almost spiritual, terms but for Terry Davis it’s literal. God told him to develop TempleOS.

TempleOS is more than an exercise in retro computing, or a hobbyist’s space for programming close to the bare metal. It’s the brainchild—perhaps the life’s work—of 44-year-old Terry Davis, the founder and sole employee of Trivial Solutions. For more than a decade Davis has worked on it; today, TempleOS is 121,176 lines of code, which puts it on par with Photoshop 1.0. (By comparison, Windows 7, a full-fledged modern operating system designed to be everything to everyone, filled with decades of cruft, is about 40 million lines.)

He’s done this work because God told him to. According to the TempleOS charter, it is “God’s official temple. Just like Solomon’s temple, this is a community focal point where offerings are made and God’s oracle is consulted.” God also told Davis that 640x480, 16-color graphics “is a covenant like circumcision,” making it easier for children to make drawings for God. God demands a perfect temple, and Davis says, “For ten years, I worked on programming TempleOS, full time. I finished, basically, and the last year has been tiny touch-ups here and there.” 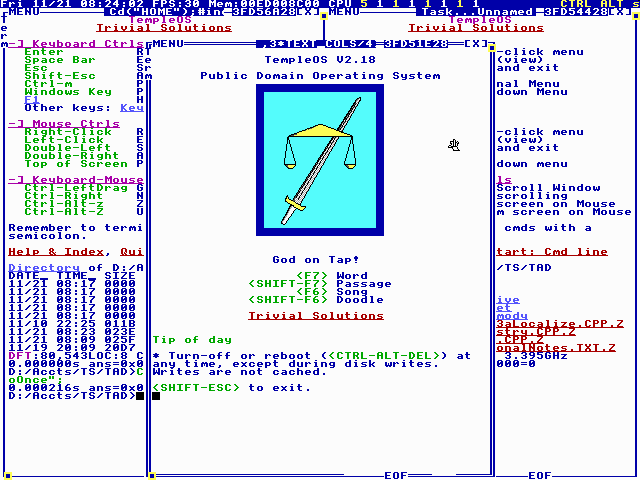 This topic was automatically closed after 810 days. New replies are no longer allowed.