I usually use Shoe Goo.

I usually use Shoe Goo.

Doesn’t last in the wet for me. This does!

Trying to save our soles, eh?

Next he’ll be speaking in tongues

So, uhm, this is your sole sole glue?

there’s a bit of my sole loose right now, I’m just going to use gorilla glue. I fixed the loose straps on my sandals with it better than new. haven’t used it on rubber yet, though, so if it fails I’ll give this stuff a go.

probably works well. I found it foams a bit and breaks down pretty fast. May last a long time depending on the flexibility needs of the area you use it on. I’ve found it cures pretty brittle.

Over here a similar product is Casco Liquisole: 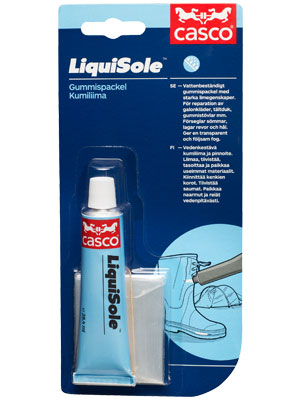 The production is completed and the product is replaced by Casco RubberFix.

I have found it also to be a good product and maybe a bit easier to find in Europe.

If you don’t know much about glues, here’s an excellent summary from MIT:

I wish someone had showed me that when I was a kid… If you read that single page carefully, you will probably know enough about glues to last your life (and make you seem like a glue expert to other people).

This site is also useful:

If you like repairing or maintaining your dwelling and things, you need unfortunately quite a variety of glues to get optimal results. Unfortunately most glues get worse when they age. I have these on hand always:

I’ve heard people saying that Barge Glue is the best shoe repair glue, although I haven’t tried it on my Birkenstocks yet.

Shoe Goo is the only glue. I’ve used it to repair everything, including sails in a pinch.

That said, I’ll probably try this. Always on the lookout for something better.

This is probably very similar to sikaflex, but thinned a bit more to make it easier to work with on this kind of job. Great stuff.

This is the go-to product for sealing cork soles, but it won’t really build to fill holes.

Barge Cement has a great reputation in the puppet building community, too.

It’s a go-to for climbing shoes repair as well, though it should be cut with thinner to the point you can just paint it on.

Just one question for anyone who has used any of these recommended flexible glues: do any of them stink of acetic acid (vinegar) while curing?

The first such product I ever became aware of turned up in pet stores in the 1960s for lunatic far-inlanders like me who craved a salt water aquarium. Standard aquarium tanks then had glass panels held together in a metal frame which the pet store guy would swear all day and all night was stainless steel. And for fresh water it was. Didn’t corrode, stayed nice and shiny. But salt water? Different store entirely.

Many fixes were tried, of which the best (of a bad lot) was marine spar varnish, which you were supposed to paint on everything that wasn’t glass. Biggest problem with spar varnish was it didn’t last so very long–usually needed to be re-done every three months. Put your fishies in a plastic bucket, empty the salt water out, soak the tank out with tap water for a couple of days, rinse it out with distilled water if you’re obsessive-compulsive (I am), let it dry thoroughly, maybe helping it along a bit with a blow dryer, then re-do the spar varnish step. This was actually sort of do-able (if you had a 10 or 20 gallon tank.) Oh, it’s a 500? Not so much.

First solution that actually worked long term was stuff in a tube, brand name “Silastic,” that claimed to be some form of silicone rubber. Same instructions as varnish–smear substance on everything that wasn’t glass and let it cure. Your whole house (if not whole neighborhood) stank of acetic acid for several days. But, holy hell, when the job was done it was DONE. You now have an aquarium that’s no more reactive than one of the noble gasses, for as long as you want to keep buying fish food.

Flash forward 30-35 years. My fish obsession days are long past. (Had babies instead, heh.) But I still spend a fair amount of time in hardware stores and there I was in the glue section and here’s something I’ve never seen before, called GOOP. Plumber’s Goop specifically, and what I wanted to do was try to keep the sole of a jogging shoe from habitually jogging off in its own direction, which has nothing much to do with plumbing. But the blurb on the package said it was tough and long lasting and stuck to everything in the Known Universe and stayed flexible. Plus, Silastic had been $24.95 per tube in 1966 money. Goop was $4.95 for the same size tube, in 2000 money which you might as well not even call dollars any more, just say pesos. So heck, let’s risk it.

The moment I got it home and punctured the tube tip the house filled up with an intense odor of acetic acid. I am all like AHA, I KNOW EXACTLY WHAT THIS SHITE IS. So I glued my errant sole to the shoe uppers and clamped it all together overnight and that was the END of that sole’s desire for any form of independent career. In fact I wore the heel off round and a hole all the way through the rubber where my big toe accelerates the Earth (slightly) by pressing down on the asphalt.

So that’s why I’m curious to know whether any of these other shoo-gloo products smell like they might be first cousin to a jar of industrial strength pickles.

Thanks! Inquiring minds want to know!

Goop is a silicone adhesive, as are many caulks and sealers and almost every clear thick glue that isn’t an epoxy. Acetic acid is a chemical byproduct of the curing process.

By the way, “spar varnish” is not used in boats because it is extra-protective from water, but because it is more flexible (and sometimes UV-protective) than regular varnish; this helps when your wood is expanding and contracting. In static applications (like your fish tank) it would be less robust than just an everyday varnish.

Couldn’t you of attached a sacrificial anode to it like they do with boats.
You might have been able to get away with aluminium foil couple of crocodile clips and some wire.

Thanks for your interesting reply, d_r. I didn’t know that. Aquarium hobbyist magazines of the day never recommended anything except marine varnish, without ever going into the whys and wherefores. And I had a little Windmill-class sailboat that was varnished all over instead of painted (Hey, who doesn’t love the look of varnished Home Depot plywood, doesn’t get any classier than that) so I had lots of cans of the stuff lying around.

dave_b, that might well have worked but I wouldn’t have dared try it due to not knowing what the effect on the water chemistry would have been. If I had actually lived on the coast where I could just toss out a casting net and haul in some salt-or-fresh-tolerant estuary victims like mollies then sure, but salt water fish from inland pet stores are bloody expensive.

Of course nowadays, being a bit better educated about what harvesting those gorgeous reef fishes does to reef fish populations, I wouldn’t buy any of them at all. My tanks all got demoted to hamster habitat and eventually given away to younger families when my own kids lost interest.

Thanks for your summary. My cycling shoes are starting to separate (the left is much worse than the right) and I’ll need something pretty reliable to cope with the extra forces from the upward stroke.