I guess that makes sense. Looney tunes cartoons are imminently syndicatable (see my childhood) and will likely make more money there than on Warner’s own streaming service

Based on what I’ve read, they previously had only about half of the original catalog, and I’m inclined to believe it, as I had previously been unable to find a few cartoons on the service. (And not some of the infamous racist ones, just some relatively obscure ones.)

The Cartoon News reports (and /Film has confirmed) that Warner Bros. Discovery has taken 256 of the classic “Looney Tunes” shorts off HBO Max, cutting the initial number 511 in half. There were 31 seasons of shorts available for your viewing pleasure. Now, there are just 15.

They may have had 511 shorts available to watch on HBO Max, but that is only about half of the total 1,002 “Looney Tunes” and “Merry Melodies” theatrical shorts created by Warner Bros. from the original run of the two series. 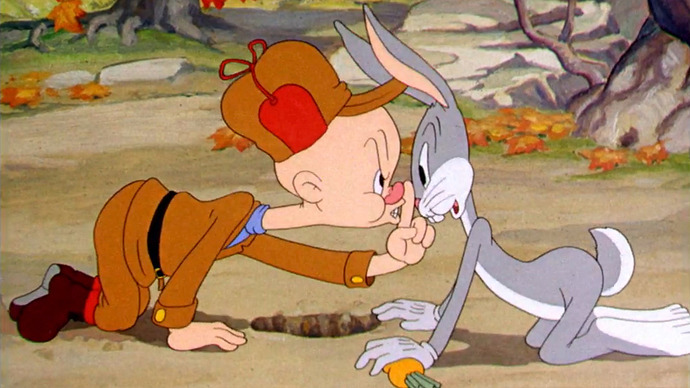 The real question is where will the ones where Bugs Bunny dresses up like a woman land? Asking for my friend, Garth

Apparently HBO Max has been dropping a lot of content, including fairly recent HBO-original shows that can’t be found, well, anywhere, now. It’s weird. Presumably they’re doing it to avoid paying some sort of residuals or fees, but it reinforces my previous assessment that they’re not serious about running a streaming service.

I’ve been pretty delighted to see Looney Tunes and Merrie Melodies on MeTV, presented in a single one-hour block on Saturday mornings. On the weekdays Toon In With Me deliberately tries to present the cheap thrown-together vibe of local cartoon programs of yore, although Bill “The Cartoon Curator” offers up interesting bits of history about certain toons.

While it’s been a fun way to revisit some favorites I’ve also been surprised by some I’ve never seen before. You Ought To Be In Pictures, with Porky Pig, predates Roger Rabbit by decades and was even an inspiration for it. Getting the original shorts almost randomly, for me, is a lot more fun than the careful way of selecting them a streaming service would provide.

This is why I still purchase the physical media of things I really like.

David Zaslav, the guy in charge of WB Discovery, famously hates scripted content and loves reality TV and shady tax writeoffs. The assumption has generally been that he’s trying to turn HBO Max into HGTV Max.

This is why I still purchase the physical media of things I really like.

And I’ll make all legitimate attempts to do the same, but if needs warrant, I’ll put on the eyepatch, hoist the colors, and fire up the ol’ torrent client to get stuff.
(like the final season of Gargoyles, which Disney has never released to physical media, yet plays it all the time on their network.)

If a company can’t find a way to take money that I’m willing, and want to give, that’s their problem, not mine.

Rather than innovate, they’d rather spend years in litigation and then cry when profits go down.

I only keep HBO Max for Modern Doctor Who. Once that moved to Disney+, seezyer geezer.