We’re on 5 acres in Joshua Tree, so I doubt anyone can hear the Hendrix at 10 k decibels.

Sigh. Yes, trying to love my neighbor, even the one who pressure-washed all five of his cars starting at 6am this morning…

Hey, @knoxblox? Isn’t this a problem?

starting at 6am this morning…

I’m glad we have local codes against that sort of thing, and wish commercial equipment wasn’t excluded from the regulations. It’s impossible to sleep in during peak lawn over-mowing and leaf blowing (before half of them have fallen from the trees) seasons. Landscaping companies are the worst source of noise in the neighborhood.

I’ll give him “clever” but I won’t give him “funny”. That song was terrible in all ways. Also, maybe give your neighbors a break? Put on some headphones for awhile. It’s not like it was the middle of the night. We’re all trying to get through this.

Edit: Yeah, okay, if it started at 6am that’s sort of a problem… 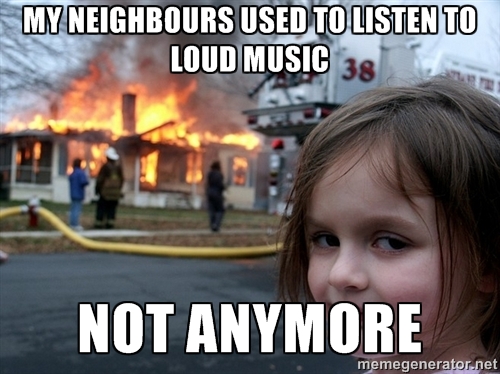 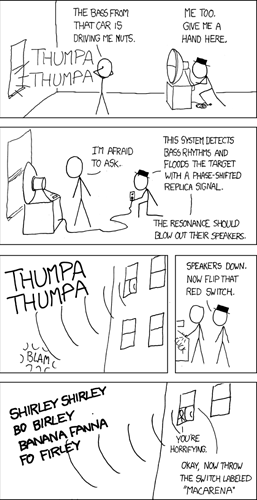 And sometimes I use it to retaliate against the guy upstairs with the loud girlfriend and the elliptical dish.

But that’s not how bluetooth works? If he’s able to connect he obviously knows the neighbors well enough to have connected to their speaker before with legit pairing. I know, I know I’m ruining the hilarious illusion.

Roommate seems more likely, and maybe more palatable, since they know each other. Who wrote the headline?

I was woken up by someone using a hammer drill today.

To be fair it was 2PM though…

It was quiet in my apt for about 5 years, and about a year ago I got two new neighbors and both are too loud and smoke too much weed.

and smoke too much weed

I guess that depends on who you ask tho, dunnit?

Hey, @knoxblox? Isn’t this a problem?

It is, but it’s mainly car stereos and rockolas (stereo, amp, and speaker combos). Then there’s the issue of possible retaliation because there is very little respect for the law/police in Tijuana.

Look, I really don’t care what people do. But I do not like the smell. And for whatever reason, every time they light up it comes in strong.

So yeah, if you ask me once is too much because I really don’t like it. I guess it isn’t their fault that the apts aren’t air tight

An apartment neighbor was routinely too loud with their music. (Worse, they had terrible taste in what they played)

Walking out to the laundry room one day, I noticed that the breaker box for the building was mounted on an exterior wall, not locked in any way, and had a handy set of labels for each apartment. Next time the music got too loud, I just went out and flipped his power off. It took a few times, but he eventually caught the hint.

I just went out and flipped his power off. It took a few times, but he eventually caught the hint.