I guess I didn’t hear about this, but I love Green Lantern. Hal Jordan was my first and will always be my favorite. But…

The drama that has been [in the works since late 2019 will now focus on John Stewart, one of DC’s first Black superheroes. The series… as to originally have revolved around Guy Gardner and Alan Scott

Also LOVE John Stewart. I have his first appearance! He is a fantastic character. (I really need to watch some of the animated series where Phil LaMarr voices him.)

Green Lantern: Mosaic only lasted a year, but it was a fantastic, very underrated at the time, series starring Stewart. After one of the Guardians went mad and moved hundreds of cities from around the galaxy and placing them on OA, he is in charge with keeping the peace.

Alan Scott was the original Green Lantern from the Golden Age, which shares the name, but had a more magical reason for his powers, vs sci-fi. While I liked him and his costume, I am not sure how or why he would be featured in modern day?

No one likes Guy Gardner. Yeah yeah, I have the books he is in, but no one likes him. He can be part of the group as the jerk you love to hate, but I wouldn’t build a show around him. 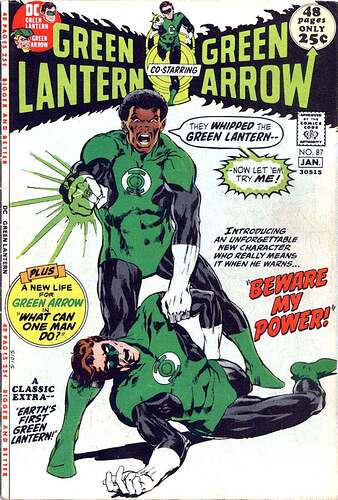 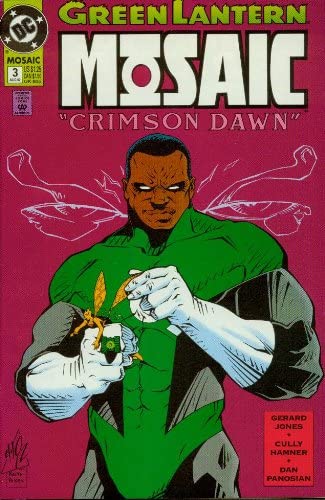 Green Lantern series is going to focus on fan-favorite Lantern John Stewart as opposed to Guy Gardner and Alan Scott.

(Assuming, of course, that I ever actually get around to watching this series … I haven’t even finished season 5 of The Flash yet …) I’d love to see all of the lanterns of sector 2814, especially Simon Baz and Jessica Cruz, at least as side characters. If the focus can’t be on Sojourner Mullein (my favorite lantern), then I’m glad to see it on John Stewart!

If you’re going to go over-powered, then double down on that shit and go ALL the way

The scene where he’s wearing a power ring on each finger? I loved that one. I mean, yeah, from a practical (“… if I were running this in an RPG …”) perspective, I’d say it wouldn’t actually grant any extra power, but since the rings channel will power, I would allow a degree of confidence boost from that because why not?

(Kind of like the mostly Elseworld-type storylines where Superman becomes a ring slinger. Sure, some of them he declines it as “too much power,” but then there are those where he leans into it.)