Two students were in custody after the shooting at STEM School Highlands Ranch, near Denver.

I actually had to check the date to see if this was an old article. Nope, another school shooting. Apparently no fatalities, so will probably be quickly forgotten. But seriously, FUUUUUCK!!!

1 dead and multiple injured, 2 suspects in custody after shooting at STEM...

A student shot at the STEM School in Highlands Ranch has died, according to Denver7, and law enforcement officials have reported eight students were injured in the gunfire that erupted Tuesday afte…

As a follow-up on the one who died:

The news report last night indicated the gunman was subdued by middle school students. I came unglued at that point…

This isn’t the way I wanted my son to grow up; choosing what friends you would die for, deciding if he’s willing to risk it all to save a few other kids, practicing cowering in the corner of a classroom without moving or speaking once in position, being taught to fight the urge to jump out the nearest window if he hears that “pop, pop…pop,pop” coming down the hall. It’s madness, and it’s heartbreaking. We can and must do better as a country.

This one made it onto CBC site. I wonder what characteristics did that or if it was the fact it was a school shooting. (I frequently see stories here about shootings that do not make it outside the US media) 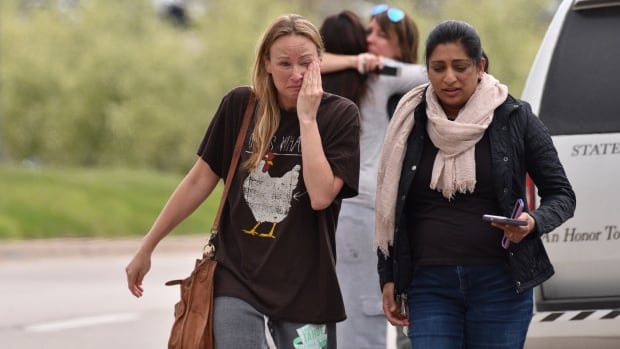 Authorities have released the name of an 18-year-old student accused of opening fire with a classmate inside a charter school in an affluent suburb of Denver, killing a teenager and wounding eight others.

Looks like the designated “good guy with a gun” may have made the situation even worse.

Guard at school shooting may have shot at deputies and wounded student: Source

Two gunmen, both students, opened fire at the Highland Ranch school on Tuesday.

So I just came across a reddit post off r/Conservative mentioning how one shooter was trans and the other was gay. That thread was bemoaning how these shooters don’t get the coverage because of not fitting the “narrative,” but I think the real talk is how anyone can get radicalized and even idolize shooters, and the two real solutions are going to be either gun control or better security, and given security doesn’t really work either, it just boils down to gun control.

bemoaning how these shooters don’t get the coverage

And they were covered, so those redditors concerns probably aren’t that important now.

Was 'Media Silent' About 'Democrat Transgender' Shooting Suspect in Colo.?

It's unknown whether the political leanings or purported gender identity of either suspect is relevant to the crime.

And you’re right, nobody has ever asked for more diverse murderers. What people want is guns to be made less available to anybody with ill intent, so these situations don’t happen to the always diverse victims.

A woman was accidentally shot by her 8-year-old child at a baseball game in Tennessee on Tuesday evening, police said.

It is pretty much a daily thing now that a child finds a loose handgun and injured someone. Even if you disregard the injured, the trauma to the child is irreparable. Where is the “good guy with a gun” when the “bad guy” is a little kid?

Like my only sticking point is if we were able to ban guns, or even some kind of curtailing, we would logically be more reliant on police for those situations that will arise, but how much faith do we have on police to do that part properly? But then that is moot in the sense even if we just reduce gun violence to between police and those they shoot, we can then deal with a single entity that is the police rather than a bunch of individual gun owners.