Herschel Walker tells another fantastic lie: "I was an FBI agent"

Originally published at: Herschel Walker tells another fantastic lie: "I was an FBI agent" | Boing Boing

Yes, there is a joke going back to grade school of what “FBI” actually stands for. . . .

From what I know of Walker’s many children it seems he took it literally.

The only thing more pathetic than Walker’s childish lies is that he stands a good chance of getting almost 45%-plus of the votes in Georgia this fall.

I’m guessing his statement wasn’t in a context where a jury would take it seriously, but imagine if someone were to threaten to arrest him under 18 USC section 912:

Whoever falsely assumes or pretends to be an officer or employee acting under the authority of the United States or any department, agency or officer thereof, and acts as such, or in such pretended character demands or obtains any money, paper, document, or thing of value, shall be fined under this title or imprisoned not more than three years, or both.

If he does make it into the Senate, is he then going to claim to be Senate Majority Leader? Or a Supreme Court Justice?

So I know we’re not allowed to assume someone’s mental state, but Walker played about 12 years in the NFL and has dissociative identity disorder with at least 12 different “alters.” (This is cited by him in his book and confirmed by his doctor in that book.) One thing I learned watching my Aunt slowly pass away from Alzheimers is that degenerative brain diseases sometimes put memories in that just aren’t true. They’re just lies inside the head, but to the person telling them, they absolutely are clearly remembering things that their brain is 100% telling them happened.

It’s clear this is what’s going on with Walker, his lies and stories don’t even make sense for any other motives. The people who will vote for him are going to vote for him. The people that won’t, won’t. Nothing he’s saying is going to change this, and he likely firmly believes these stories to be true because he likely has false memories of them from one of his alters.

That all said though, he probably shouldn’t be a US Senator if he’s this compromised.

The real tragedy would be if this knuckleheaded compulsive prevaricator replaces Raphael Warnock, who is a good guy and an orator of MKL-level inspirational quality.

Listen, people of Georgia, Alabama and similar ideological locales: football is fun to play, fun to watch, and a highly lucrative business for NFL team owners. But being good at playing it, or at teaching others to play it, does not qualify you to serve the public in government.

the senate run is probably part of his path to become president.

That all said though, he probably shouldn’t be a US Senator if he’s this compromised

honestly, it’s a tragedy that this is what happens to the brains of football players. they’re sacrificing themselves on the altar of super bowl spectacle. and most of them aren’t as well known as walker

and while it is a tragedy, he and his “supporters” shouldn’t be turning it into a farce. it’s a bad situation for him now, and a worse one for georgia and the country if he wins

The good Reverend is going to have to get a neck adjustment soon.

The moment a noninvasive test for CTE becomes available, American Football will be forced to radically changes its rules, or fade into history as a blood sport.

At some point it becomes necessary to acknowledge that former contact sport athletes like Mr. Walker exhibiting erratic behavior are not well.

The moment a noninvasive test for CTE becomes available, American Football will be forced to radically changes its rules, or fade into history as a blood sport.

They’ve known for 30+ years how bad it is, and are as popular as ever, despite having covered up, denied, and completely harassed detractors into oblivion. American football’s never going to change. They’ll always find people to play it or watch it, and their target audience loves it because it’s a blood sport. The highest paid state employees in 35+ states in the country are football coaches.

That’s the problem. We , as a country, have not only accepted the bloodsport, but a significant number of people believe that those that come out horribly injured on the other side are “stronger” and “better” for it, and thus worthy of being a US Senator.

You mean like, say, pretending you’re President when you’re not? 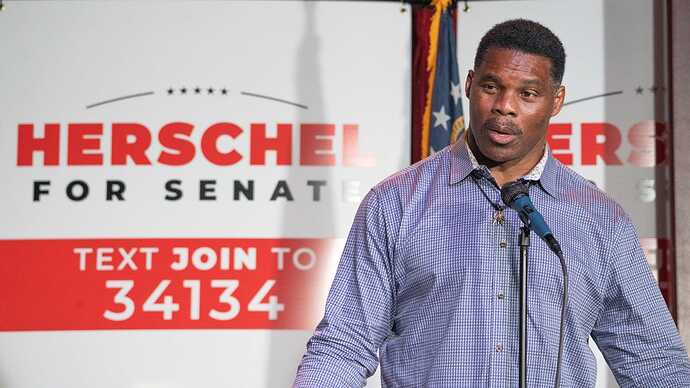 Georgia Senate candidate Herschel Walker's comments on the state's new abortion ban were incredibly stupid and out of touch.

@Melizmatic Your meme selection is always on point.

That all said though, he probably shouldn’t be a US Senator if he’s this compromised.

I assume this medical condition could be taken into account when determining if he can get a security clearance? Without that clearance I’m guessing he would be as impotent as a Nevada boxing commissioner or Marjorie Taylor Greene.

I assume this medical condition could be taken into account when determining if he can get a security clearance?

Routinely congress critters get security clearances regardless. If they need it to effectively do their job, and the voting public thinks they’re qualified to do the job by voting them in, they’ll get the clearance.

I’m partially incorrect on this. Congress critters do not need security clearances to read classified intel. Their offices, staffers, etc, do , however.