Hillary Clinton speaks out against Harvey Weinstein, says she is "shocked and appalled"

eriously, though, it still matters some because it 1) shows more corruption in the Democratic party and 2) just because Trump is worse doesn’t mean they shouldn’t hold their party to higher standards.

Did the Democratic party cover for this guy or try to downplay his behavior once it became publicly known?

The Republican candidate bragged on tape about BEING a sexual predator.

Yup, that’s my go-to for these situations. Might as well use the fallback…

agreed that trump is garbage fire but that doesn’t mean we can’t point out the other barge telling us they’ll rescue us from the garbage fire is also a garbage barge… on fire.

Weinstein is garbage, sure. The question is whether it’s fair to pin his garbage person behavior on Clinton or the Dems.

Maybe it is fair if Hillary enabled or excused that behavior in any way. Is that the case or no?

I felt like I was in an episode of “The Twilight Zone” reading major publications and tweets from mainstream pundits like CNN’ s Chris Cillizza who wants to know why Clinton wasn’t speaking out.

The allegations against Weinstein have raised new questions about Clinton’s emails. /s

I want to be clear, just in case that actually happens, that I’m not serious. Because 2017.

thinking about the democratic party and not hillary clinton personally, it also depends on how they “deal with” numerous women who have accused bill clinton of sexual harassment or assault…

all patterns from other powerful institutions (liberal or conservative or garbage fire) point to them being probably true in some form.

and then where are we?

factor in her email 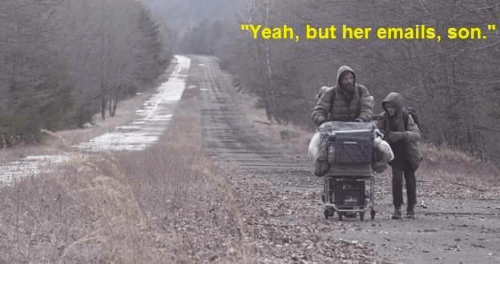 If that’s laundering, remind me to avoid your sock drawer.

I think that’s an oversimplification of the point someone was trying to make. Probably depends on the definition of ‘associate with’ and if that goalpost moves when applied to the ‘sides’ one sees as involved in the black and white struggle it obviously is.

Garbage people tend to associate with other garbage people. None of this should be a surprise going either way.

You mean like Judy “JD loves HW” Dench? There were plenty of people, even women inside the industry let alone outsiders, who were unaware of Weinstein’s rapiness, and socialized or did business with him because they were only familiar with his positive qualities, including a preference that Bush, Dole, and Trump not be president.

Did Hillary Clinton continue associating herself with Weinstein after the sex scandal became known?

If so she deserves some measure of judgement, but I’m still not buying this “see both sides are bad about this” false equivalency unless the Democrats decide to nominate Weinstein for the 2020 ticket.

Did Hillary Clinton continue associating herself with Weinstein after the sex scandal became known?

After it broke in the national news? Probably not.

After it became known in the social and fundraising circles she frequents? My guess is very likely yes, it seems as if everyone in the movie industry knew. We may or may not find out for certain.

My guess is very likely yes,

well nothing is as unbiased as your guess.

I know, I know. Her emails.

Shame about that blind spot.

And starting a needless war in Libya.

That’s a truly damning photo, if one blows in the wind and jumps quickly to conclusions they’re led to.

And starting a needless war in Libya.

Last time i saw someone enjoy hating a woman that much over partisan politics that were totally not just their own hangup… it was Jane Fonda.