"Hitler's only kidding about the antisemitism" New York Times, 1922

42% Young Earth Creationists? I’m not saying that’s impossible, but can I get a citation? 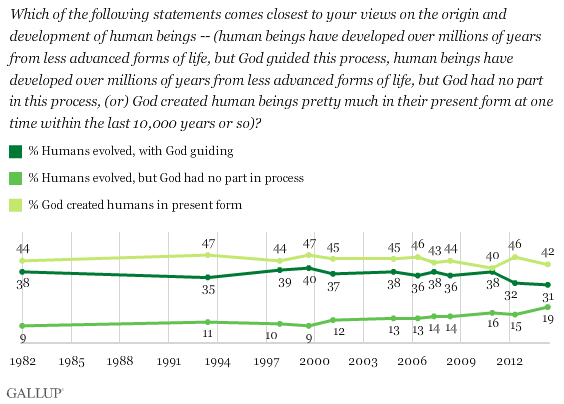 I think this election has proven that America’s biggest problem is education. Anybody properly educated about history would not vote for Trump. And although many of his voters were, in fact, college educated, I believe that they had a poor college education. Even the simplest, shallowest understanding of economics would tell you that there is literally no way Trump is going to magically replace manufacturing jobs that robots, not China and Mexico, have taken away. 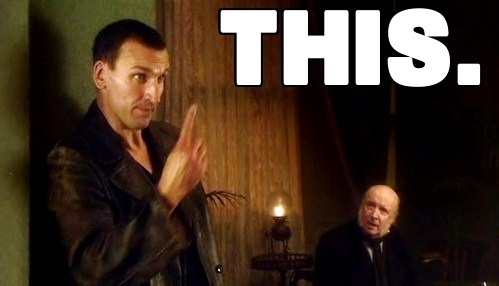 I’ve actually heard good things about him from his political career in Ohio. And checking the Wikipedia page (see below) there are two things i think are worth noting: first, later on when he was mayor of Cincinnati he worked (unsuccessfully) to make the council more democratic; second, he hired a prostitute while he was on the city council. While i have no problem with the idea sex work per se, the illegal sex trade is too rife with abuse to be easily excusable for me. In 1970, Springer ran for Congress. He failed to unseat incumbent Republican Donald D. Clancy, but took 45% of the vote in a traditionally Republican district. He had previously spearheaded the effort to lower the voting age, including testifying before the Senate Judiciary Committee in support of ratification of the 26th Amendment. Three days after announcing his candidacy, Springer, who was also an Army reservist at the time, was called to active duty and deployed to Fort Knox. He resumed his c...

What does that mean? Properly educated?

I took it to mean being able to read critically, do research, and synthesize a coherent understanding.

Which plenty of contractors, carpenters, etc. whom I know personally are able to do, despite not going to college. It’s not about the level of academic education achieved; it’s the quality of the education. I grew up with plenty of people who only made it to 6th or 8th grade in school, but they had been taught to value the process of figuring things out when they didn’t know something.

Exactly. Alot of the Alt-Right, for example, despite being college educated, fail at this because they’ve internalized the belief that their thoughts and biases are innately rational and that anyone who disagrees with them is automatically irrational.

Here’s a preview of his ideas on food safety http://www.foodsafetynews.com/2016/09/my-bromance-with-the-donald-to-hell-with-food-safety/

Sorry, there were a few comments earlier in the thread that referenced Christian rapturists in the light of Trumps religious supporters. I’ve just started commenting here so I am learning the ropes, sorry if I did it wrong.

Not at all! You’re fine, actually. I just don’t remember anyone mentioning rapturist specifically, except in relation to policy on Israel?

The dominionists are very much in power right now, with Pence as the VP-elect. I totally agree with you on that.

Take that, big government!
On the bright side, just think of the investment opportunities… Adult diapers; Pepto-bismol/Imodium/etc; children’s caskets – the sky’s the limit. Also Chipotle’s stock should recover as explosive diarrhea becomes the norm.

When people thought that Herr Drumpf was referring to the 1940’s/1950’s as his reference point for MAGA they were off by ~100 years.

It’s worse than that: in the current New Yorker, Glenn Beck (!) is quoted saying reasonable things! About Michelle Obama, no less, and how her post-“pussy grabbing” speech was transformative for him.

We live in interesting times.

Thank you! Yes, those were the ones I was referring to. As to how the dominionists see Israel/Jews, I haven’t looked into that. I’m curious to know.

Not only all that, but the article actually says “bait to catch messes of followers.” I’ll say!

I was disagreeing with your conceit that Rapturists were an extremism resulting from a dying religion. If you want to argue that slightly less than 3/4 of Americans self-identify as Christians rather than slightly more than 3/4, I’ll agree, though your minor adjustment to the number just validates my position that in America Christianity is the norm. Updating the figure doesn’t change that Rapturists are an old and persistent phenomena in the US that’ve been around for well more than a century, still are dominant here as political force, and will be with us for a very, very long time to come due to the way educational systems are structured in the US. They aren’t going away just because they seem crazy to well educated people, since in the US well educated people are very uncommon.

Thank you! Yes, those were the ones I was referring to. As to how the dominionists see Israel/Jews, I haven’t looked into that. I’m curious to know.

I have been told, to my face, by a bright-eyed Baptist missionary, that it is my God-Given Duty to Return To The Land Of Israel (I’ve never been there) so that, when the Children Of Israel are Gathered (you could hear the Capital Letters), we could perish and Usher In The Second Coming Of Jesus Christ. And he was jealous, because I’d be at Jesus’s side to escort him down from heaven, and he wouldn’t. Needless to say, I backed away slowly and carefully. But it was distinctly creepy to meet someone whose worldview insisted that my sole purpose in life is to die to bring about the return of his zombie god. So I watch the Evangelical takeover of the Republican Party and shiver in fear, because I know what my life means to them.

It certainly isn’t all Christians. But it surprising you haven’t heard of the concept before. Its central to certain kinds of christian eschatology; and deeply, deeply embedded in the whole fundamentalist/evangelical wing of the faith. Shit it was a massive plot point in the Left Behind series that got so weirdly popular a decade back. And its been one of the key reasons behind the Religious Right and the GOP’s unending, uncritical support for Isreal. Isreal must remain a nation. Jews must return to Isreal. And Isreal must be empowered as a specifically Orthodox Jewish religious state so they can re-build the Temple in Jerusalem. And that Temple must then be destroyed. Which is what triggers the end times. Its all very weird, but its pretty pervasive. Even good ol’ G Dubs supposedly bought into. And numerous Congressmen have mentioned it pretty openly over the past couple decades.

Exactly. The Evangelical wing doesn’t support Israel because they like Jews. They hate us on a level usually reserved for balky machines that are too expensive to therapeutically smash–which is all we are to them. Things. Objects. Ones that they feel that, if they do the right actions to, will have the desired output of the return of their zombie god. But not people, or humans, and certainly not sentient, free-willed individuals. Just an object in a category, an object whose actions are not conforming with their desires and thus must be corrected.

And they have enough pull and influence in the US to get Dubya to speak at one of their events three years ago.

It’s absolutely horrifying to see evangelicals look at Jewish people not as human beings deserving the rights and respect all humans innately deserve, but as tools - pawns to be manipulated into bringing about a magical transformation of the world that destroys literally every aspect of the modern world to replace it with their theocratic dictatorship.

You’re a not-quite-human pawn to be used in that scheme, I’m an apostate that must be destroyed and punished for eternity because of Jesus’ love.

These people are the dominant activist base of the GOP today, with the Reagan and both Bush admins being full of them. I remember Watt as Sec. Interior saying there was no reason to protect the environment since the Rapture was coming so soon. The coming Trump admin will be laden with with more of them, with VP Pence likely to be a Cheneyesque theocrat pushing that agenda while hiding behind a lazy, incompetent, credulous figurehead of a Pres.

Hitler wasn’t a vegetarian but even if he was, Trump is a carnivore like Stalin, Genghis Kahn and Napoleon

I was disagreeing with your conceit that Rapturists were an extremism resulting from a dying religion. If you want to argue that slightly less than 3/4 of Americans self-identify as Christians rather than slightly more than 3/4, I’ll agree, though your minor adjustment to the number just validates my position that in America Christianity is the norm.

I cannot possibly discuss anything with anyone with such a cavalier attitude to studies, sampling and statistics. I don’t exactly understand why you wish to oversimplify the picture and misrepresent a serious, large scale longitudinal study, but if that’s what you want to do, you are of course free to do so.
You would doubtless be horrified if I told you that you are using the techniques of the evangelicals themselves, but to a degree I think you are. They are fond of using broad-brush and incomplete statistics too.
Sociology is not an exact science but it is a lot more rigorous than you seem to think.

I cannot possibly discuss anything with anyone with such a cavalier attitude to studies, sampling and statistics.

Maybe you could just admit you were wrong instead of doubling down on an irrelevant tangent you tried to pull in to try to change the topic once it was made very clear your original position was false?

The total number of self-identified Christians in the US wasn’t the germane number. The total numbers of Evangelicals and Premillennial Dispensationalists were, and so far as there are numbers available (there aren’t for Rapturists) my numbers were accurate there as other comments showed with cites.

You would doubtless be horrified if I told you that you are using the techniques of the evangelicals themselves, but to a degree I think you are.

You might want to check if there’s a mirror available, since your rhetorical tactics are familiar from my experience with discussions with evangelicals. Whenever I made a point that showed they’d contradicted themselves or made a logical error they’d change the subject or go into attack mode, and here you are doing both.

Like an evangelical in defensive mode, you’re spinning hard to try to run from the fact that your original position was historically uninformed. Your clarification of the total number of self-identified Christians was worthwhile in itself, but as presented was not a contradiction of anything I said, and seems to have been a way to dishonestly change the topic. I agreed with your more accurate stat, but pointed out that even using the more rigorous number, that number was not really at the root of my argument and the number provided with more reliable sampling and statistics actually proved my point and undermined your original argument.

I’ll be happy to drop the discussion, though, since it’s clear you can’t admit error or discuss the topic honestly.

I remember Watt as Sec. Interior saying there was no reason to protect the environment since the Rapture was coming so soon.

Oh hey, I checked and it looks like he’s not dead yet! Surprised they haven’t tried to bring him aboard the Trumpocracy; it seems like he’d fit right in.

Don’t try to make this about Trump. The real story is that the New York Times was as useless a source of information then as it still is today.

You can find good information, news, and opinion - elsewhere. Cancel your subscription to the NYT.

Bonus: you might be the straw that breaks the camel’s back and make Thomas Friedman loses his job.