This is hardly new. Just on Chicago’s El: Risky Business’s (ahem) climax took place on one train that appeared to travel on every one of the exisitng elevated lines. Running Scared has a car chase which jumps onto the Skokie Swift tracks in suburban Skokie, and magically appears next in the loop, although that would require going through some major switches at Howard and probably Fullerton.

I remember 28 Weeks Later playing fast and loose with London geography - among the many, many stupid things about that film.

And there’s the “Georgetown” subway stop in the movie No Way Out. But of course that is explained by the fact that when he boards the subway, it is the Baltimore subway rather than the DC one. Those of us who live around DC are used to geographical absurdities in movies…

… which was a shame, because they added quite a lot to the movie universe of zombies. But I think they tried too hard to “Hollywood” the movie.

I’ve been hoping they’d follow up, but alas … no news.

No thanks, 28 Weeks was horrible.

28 Days was good until that ham Ecclestone turned up. I’m on a bit of a Danny Boyle kick recently, maybe I’ll dig that one out again. Yay for the GYBE soundtrack, too.

Another one for the long list, this one involving a creative (or lazy) re-imagining of San Francisco:

The chase scene in Steve McQueen’s Bullitt begins with the cars heading south from Cesar Chavez into Bernal Heights. As they near the cusp of the hill, Coit Tower suddenly comes into view and they’re suddenly in North Beach

Not to mention that most of that chase is the same manoeuvre from multiple angles. Seriously, see how many times they overtake the same VW Beetle.

Still love that film, though. Mmm… Jacqueline Bisset in that yellow dress…

Spider Man 2 has a scene on an elevated train that travels across midtown that leads to some random sudden stop at some insane height (about the eighth floor).

When I say 28WL (c what I did there?), I mean the lineage. It was a silly movie, given its roots. They could have recovered poise in III, and certainly left the stupidly obvious cliffhang to launch the movie

Seeing as Danny Boyle lives in Bow, in the East End, you’d think he’d get London right. But then Film London being different from Real London happens ALL THE BLOODY TIME! The most recent one I saw was Elementary goes to London where Scotland Yard is apparently on the south bank between London and Tower Bridge. Film directors seem particularly fond of driving cars down the rabbit hole that connects Borough Market with Hampstead Heath in 90 seconds.

Similarly, part of the video game ZombiU is set in a fake tube station- it apparently is served by the Bakerloo, Central and Waterloo & City lines. The 3 lines never meet at a single point.

Signs in the station call it Mile End (only on one of those lines), but in the cut scenes it’s Shadwell which isn’t a tube station at all (it’s on Overground and DLR).

Fact based art criticism at its best. You go guys.

You’d think there’d be more attention given to realism in a Marvel movie about Norse gods.

Spot on. This is not a documentary.
Does the story work? Is it fun to watch? Are the plotholes tolerabe? Etc., that’s what I want to know.

This is my boyfriend’s #1 pet peeve when he watches movies that take place in NYC.

I feel your pain. Really. I’m friends with people who would rather see see a three hour movie of a train ride from the driver’s POV and pay good money for it.

Are there elements that could easily have been fixed that would allow the audience to remain immersed in the world? You could add that to the list.

So the inaccurate subway layout in this movie ruined his enjoyment, but I’m going to guess he wasn’t bothered much by the sheer physics defying absurdity of the helicopter aircraft carrier which played a major, sustained role in The Avengers.

“But it was in the comics!”, some cry out. It’s still absolutely stupid. Rotorcraft aren’t powerful enough by far to lift that kind of weight. In fact, no aircraft ever created at all could come anywhere close to lifting that kind of weight - not even the smallest, lightest aircraft carriers ever built would be even anywhere near able to fly, even if you strapped an absurd number of moon rockets to them. They’re just too damn heavy.

If you’re gonna complain about the silly things in a superhero movie, at least go for the truly silly ones! 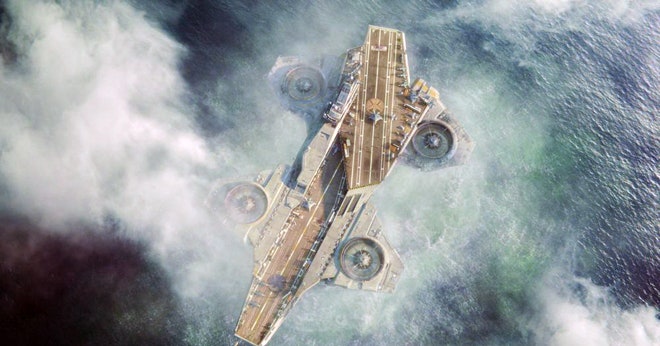 Could the S.H.I.E.L.D. Helicarrier Fly?

In the movie The Avengers, an aircraft carrier turns into an airship. Dot Physics blogger Rhett Allain explores just how big the aircraft's rotors would have to be.