I made the mistake of seeing this movie in the theaters

That’s unfortunate, I luckily waited until it was released on Disney+. I started it, turned it off and have yet to finish it. The same thing happened with the latest Dr Strange movie.

It didn’t feel nearly as fresh and inventive as Ragnarok but I still liked it better than The Dark World.

Also depicting Tanngrisnir and Tanngnjóstr as screaming goats was an undeniably funny take on the classic mythology.

I still liked it better than The Dark World.

I never finished that one either, so I guess it’s a toss up for me.

I never finished that one either

I thought it was pretty brilliant how Thor: Ragnarok used Loki’s play to recap the critical events of the previous movie since they knew most people either found The Dark World forgettable or skipped it entirely. The gag had diminishing returns in Love and Thunder though.

I watched it. It was fine. Not as good as Ragnarok. Not as bad as Dark World. About on the level of the first Thor. Felt disjointed, though, like it needed a couple of more editing passes and some of the dumber gags removed…

I thought it was pretty brilliant how Thor: Ragnarok used Loki’s play to recap the critical events of the previous movie since they knew most people either found The Dark World forgettable or skipped it entirely. The gag had diminishing returns in Love and Thunder though.

… yeah, that one right there. Literally no need for it this time, just rehashing a joke that worked in the previous one but detracted this time. That and all the “my weapons are jealous of each other” jokes could have been nixed.

my expectations were high only because ragnarok was so great. it didn’t live up to that at all.

it also annoyed me they didn’t really give jane a story. her’s only existed for thor prime. instead, all that time was taken up with guardians of the galaxy for some reason? why?

i did love the mjölnir teddy bear*, and the goats. and didn’t mind the weapon jealousy - hemsworth was able to make it work where probably no one else could have. ( *those poor kids will be traumatized for the rest of their lives )

also, it occurs to me now the zeus scene was just the jeff goldblum scene from ragnarok all over again.

Honestly, the only thing I liked about this movie was the screaming goats.

I wasn’t impressed the first time, it seemed way too corny. Then I learned that the movie is from the perspective of Korg, which in hindsight I should have seen since it starts with him telling the story.

From that viewpoint, everything makes a lot more sense.

It was ok, I know my mum dad and sister watched it in the cinema and regretted going they all thought it was shit, I watched it while doing my ironing.

Why where the guardians of the gal in it all, It was fan service, but low quality fan service at best.

At this point I jus think of MCU movies as a sort of smooth homogenous entertainment gel, and from that perspective I thought it was pretty good. It reminded me of those “Marvel swimsuit edition” comics they occasionally used to do.

The terminal illness stuff was jarring though.

Korg could never get a guy like that to settle down. You know the saying: “a Roland Stone gathers no moss.”

Disney has learned that if you want a Rock you can depend on you’ll never go wrong with a Dwayne.

So I’m totally onboard with Kronan reproduction involving two dads holding hands for days while sitting over a lava pool, but did they ever explain how mothers fit into the mix? In Ragnarok Korg said:

I tried to start a revolution but didn’t print enough pamphlets, so hardly anyone turned up, except for my mum and her boyfriend, who I hate.

So was his mom the lava pool? That would be pretty badass. 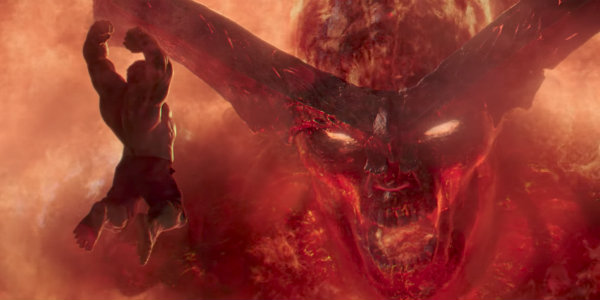 ah! see you made the mistake in thinking korg was a reliable narrator. he’s actually the nemesis of mcu phase 5 wherein we discover he was made by a young tony stark as a futuristic rock technology project gone horribly wrong.

At least I saw it on a day when the ticket prices were cheap, but I now find myself thoroughly disinclined to ever see a Marvel movie in theaters ever again, especially when they’re so readily accessible on Disney+. (I actually kind of regret that I couldn’t see The Eternals in theaters – but then, I also appreciated being able to take a bathroom break halfway through.)

The nicest thing I can say about it is that at times it had the same vibe as a rather awful 80’s fantasy movie – the kind of thing that got tossed out with reckless abandon and the expectation that the wee ones in the target audience really wouldn’t know any better. Except that it wouldn’t sell nearly enough playsets and toys. (The Omnipotence City Stage with Divine Clothes-Fall-Off Action? I think not.)

The chicken-headed motorcycle-riding aliens in that opening battle scene certainly felt like something from Jim Henson’s Creature Shop.