All right!
I love it!
I shall use this from now on as an alternative to Orange Bastard!

Can I get to know what did he said without having to hear him say it?

Most YouTube videos have a close-caption (CC) option at the bottom. Most are auto-generated so there’s some errors but they’re still readable.

Autocrats and aspiring ones can countenance anything except being laughed at in public.

Yep. I vaguely recall a discussion here a year or more ago where I seriously wondered why the White House press corps didn’t just laugh at Spicer every time he told one of Trumpty-Dumpty’s lies, and wondered why Trumpty himself did not get more direct mockery.
It might have an effect, if only to cheer the rest of us up a bit.

ETA ref autocrats hating mockery - the best case study is, of course, Roderick Spode. Always cheers me up to read about him.

We need a President who isn't a laughing stock to the entire World. We need a truly great leader, a genius at strategy and winning. Respect!
9 Likes
Shuck September 25, 2018, 10:17pm #45

Trump on laughter at UN during speech: “Oh it was great. Well that was meant to get some laughter, but it was great.”

It obviously wasn’t, and re-watching the video, he wasn’t happy about it at the time, but… yeah, he’s at least pretending it was a success now.

I don’t know, this isn’t a loss for him by any metric that counts for him and his.
he gets to brag his useless self up in public
While insulting everyone else (the establishment)
Any contempt is from foreigners:he and his are xenophobes
He doesn’t believe his shit anyway, he can laugh along it’s so stupid
The live audience gets that joke and laughs along
He goes home emboldened to destroy any bulwark against world war for the crime of lesse majeste…

I mean it sucks for everyone else, but the reality that everyone in the world bar the most corrupt turds on the planet think he is worthless is not new knowledge. Republican presidents are really, really unpopular outside America. Like really.

Trump says he meant to make world leaders laugh during UN speech when he claimed...

President Donald Trump on Tuesday afternoon claimed that he meant to make world leaders laugh during his address to the United Nations earlier in the day, but he initially said he "didn't expect that reaction."

It seems like someone said or did something in between his “America’s…” and “so true”, but I can’t hear anything on the audio. And then after “so true” I hear people start to laugh. So I’m wondering what the “so true” is in response to. Or maybe it’s just his typical mangled speech.

It doesn’t matter if everyone laughed.

The US basically created the UN after WWII. They dominated it for a long time. They are now bound to destroy it instead of reforming it.

If they really want to do that, they will succeed.

The question would be not who laughed, but what is happening to create something positive out of this, without the support of the US. And also, how to deal with the next crisis if the UN and the UN SC in particular are not working properly.

The escalating threats against the United Nations will soon begin.

Soon turns out to be “in the same speech”.

As my administration has demonstrated, America will always act in our national interest.

I spoke before this body last year and warned that the U.N. Human Rights Council had become a grave embarrassment to this institution, shielding egregious human rights abusers while bashing America and its many friends.

Our Ambassador to the United Nations, Nikki Haley, laid out a clear agenda for reform, but despite reported and repeated warnings, no action at all was taken. So the United States took the only responsible course: We withdrew from the Human Rights Council, and we will not return until real reform is enacted.

For similar reasons, the United States will provide no support in recognition to the International Criminal Court. As far as America is concerned, the ICC has no jurisdiction, no legitimacy, and no authority. The ICC claims near-universal jurisdiction over the citizens of every country, violating all principles of justice, fairness, and due process. We will never surrender America’s sovereignty to an unelected, unaccountable, global bureaucracy.

America is governed by Americans. We reject the ideology of globalism, and we embrace the doctrine of patriotism.

Around the world, responsible nations must defend against threats to sovereignty not just from global governance, but also from other, new forms of coercion and domination.

And we are working to shift more of our funding from assessed contributions to voluntary so that we can target American resources to the programs with the best record of success.

It’s really a full on “fighting against the NWO” speech while also telling everyone that yes, we do have a very nice collection of big sticks and we’re not walking softly anymore.

All the stuff about energy supplies for example.

Can I get to know what did he said without having to hear him say it? I know, I know, but really, spare me the torment of hearing his petulant voice, his general 12 year old language and attitude, etc.

It seems like someone said or did something in between his “America’s…” and “so true”, but I can’t hear anything on the audio.

The audience reacted restively to his initial hyperbole. He then did his usual thing of trying to reinforce the outrageous whopper he just told by saying “So true” or “Hardly anyone knows that but you know…” - in this case “So true”.

America is governed by Americans. We reject the ideology of globalism

It honestly wouldn’t shock me to learn he’s a Flat-Earther at this point.

Mr racist ex-uncle’s reaction to that clip was “at least he can laugh at himself.” Which needless to say is definitely NOT my interpretation of that moment. 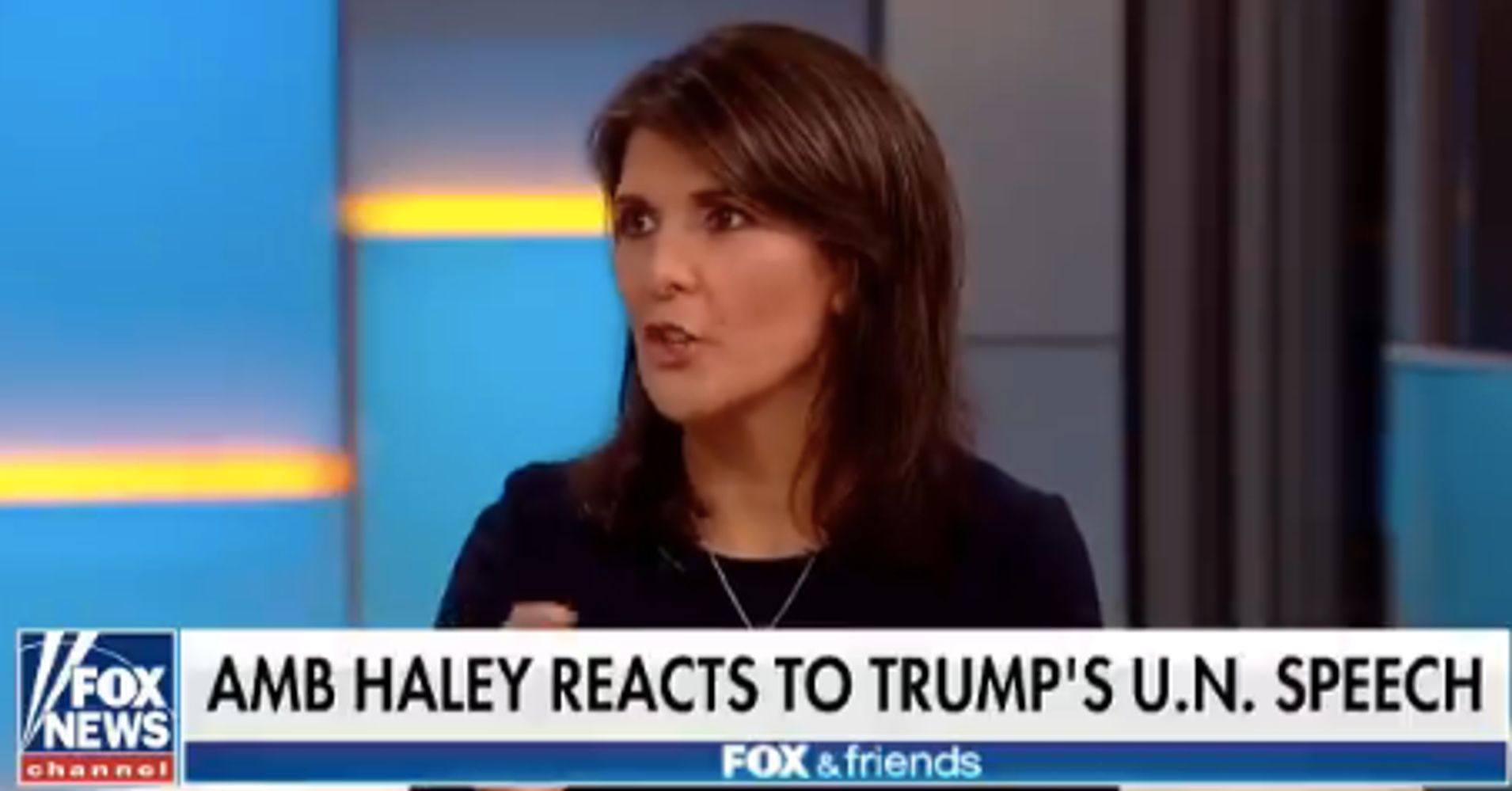 Nikki Haley: UN Laughter Not A Diss But A Sign Of Respect For Trump’s ‘Honesty’

World leaders were “falling over themselves to get a picture with him," the U.S. ambassador to the United Nations said.

Shades of Baghdad Bob. They can try to twist it anyway they want. I don’t know anyone that laughs out of respect.

No, no Your Imperial Majesty, when that child was pointing at you and shouting that your arse was hanging out for all to see, what she meant was that your arse looked great in your fabulous and very tasteful new robes and everyone should look at it.

Spot on, but that naked 45 is a helluva image to leave us with.

Fake Gnus! Fake Gnus! FOX says it never happened and if it did he meant to be funny

The network also cut out the laughter during the speech on social media.