I couldn’t find a link in the excerpt posted, so I found a couple that included the video it described. Very cool, but I’ve never seen sandstone erode that quickly, even allowing for the time lapse video. 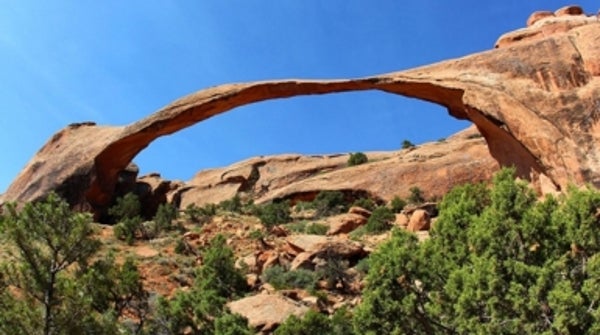 Sandstone Arches Form under Their Own Stress

What happens, Mayo says, is that as erosion undercuts the material in ways that would normally cause it to collapse, pressure mounts along the remaining rock where the greatest amount of material has been removed. Eventually, a critical pressure is reached at which the sand grains lock together and become “incredibly stable”, he says.

Whoops. Thanks. Forgot to include the link. It’s from Nature and I’m adding it in now.

Please consider rewriting the following: “It’s not caused by erosion. Instead, the rock, itself, forms the arch and the erosion just washes away everything else around it,” to “it’s not solely caused by erosion…”

In the passage beneath, there are four points to erosion in the formation of sandstone arches. Subsequently, there are 11 references to the contribution erosion plays in these formations in the linked article at (http://www.nature.com/news/sandstone-arches-form-under-their-own-stress-1.15590). Finally, in the subtitle in the linked article it clearly states, “Downward pressure and erosion combine to create celebrated rock formations.”

I point this out because it’s somewhat misleading, at least for me it was. This was the only reason I clicked the link to read the story, and then found that outside of stress within the rock, erosive forces aid in the construction of such arches.

Agreed (I was going to comment to similar effect earlier but left the tab open and forgot about it…) but I love that this is actually a semantic argument and that Maggie wasn’t incorrect (just slightly misleading, as you explain, depending on how you interpret it).

The arch does form within the rock independent of erosion. I love that. It makes sense intuitively once you hear it (at least to me, a geologist with an interest in rock mechanics and structure ;)), but you wouldn’t think of it. Now you can’t miss the hole missing (pun accidental but welcomed) from the classic logical explanation, that’s it’s just wind erosion that somehow forms arches. And that means that there are probably arches within many sandstone features in Utah (and elsewhere) that aren’t visible yet.

That really changes how the landscape is viewed and experienced - and I highly recommend visiting the various national parks and monuments in southern Utah and experiencing it yourself, by the way, they’re fantastic.