How to better answer "So, what do you do?"

Originally published at: How to better answer "So, what do you do?" | Boing Boing

Everyone who has ever studied or taught English knows that the answer is, “I’m fine, thank you. And you?” /s

To immediately establish dominance the best reply is “Your mom.”

Unfortunately you also have to be ready for the follow-ups. At an incredibly dark and religiously angry wedding in Virginia once, the father of the bride (who had payed for the entire shin-dig, on the condition he could set the tone) asked me what I do. “I’m a web developer!” I cheerfully answered. He replied, dripping with condescension: “And what exactly does that contribute to the world?” Meanwhile, my dude was a corporate lawyer. Stammering instead of saying “well at least I’m not making things actively worse” is a nagging regret to this day.

Do you have an unforgettable answer to that question? We introduce ourselves all the time, and if we’re honest, we usually blow it. Answering this question poorly is the most frequent mistake we make, and the easiest to fix. The Elevator Pitch is dead. Nobody wants your business card…yet. After meeting one of his heroes and blowing his introduction, Clay Hebert has been obsessed with how we introduce ourselves and tell our story. In this short but powerful talk, Clay will share his Perfect Intro framework that has helped thousands of entrepreneurs, leaders, and brands craft better intros, tell compelling stories, and be unforgettable. Clay Hebert wants you to love your story.

What strikes me about this paragraph is that it isn’t about meeting someone on a personal level as I was expecting from Rusty’s intro sentence, but as a networking tool. I was just thinking about this earlier this morning, that I’m old enough to remember when “personal brand” was called “being fake” or “obsessed with image over substance”. Whatever happened to just friggin’ be yourself. The trend towards self-awareness about purposely mixing professional networking with who you are as a person is… weird, and I don’t really trust people who come off this way. If I’m having a conversation with you, I’d like to know more about you, not know more about your carefully constructed self-image equivalent of a business card.

It’s one reason I never joined Facebook, it’s chock full of this and encourages it.

After moving to DC I kept getting asked “Where do you work?”. Not at all interested in the location of my work but who I worked for.so they could network. Sometimes now I answer the question with a location just for fun. It’s a sincerity test.

Many (most?) people identify themselves by their current occupation (the one that pays the bills), and I think that’s kinda sad. Sure, some people are employed in a role they’re passionate about and that’s great. But many others sell themselves short by focusing on their employment rather than their interests, passions, hobbies, friends, heroes, etc.

You are not your job. Your tombstone isn’t going to say “beloved barista/ride-share driver/contestant coordinator”–at least, I hope it won’t. Not because there’s anything wrong with those jobs, but because defining most people by their job sells them short. “Beloved parent/child, sibling, partner.” Maybe “Philanthropist.”

Reframe the question, especially if it’s phrased as “where do you work?”
If you’re meeting someone at a professional conference, then maybe that’s the point. But if you’re just trying to make a social connection, the goal is to find some common ground. It’s a numbers game, so cast a wide net and ask about theirs to find something in common to build from.

I’ve been thinking about this a lot, since I’m currently unemployed (by choice). Before I quit, I was paid to be a software engineer, but a huge part of my time and energy was spent battling the incompetence, greed-driven malice, and lawlessness of the companies my employer selected to administrate its patchwork health insurance plans. Neither role is part of my identity nor something I want to lead with when meeting someone who asks what I do.

I don’t have a succinct answer I like to use. My passions are numerous and mostly very niche. 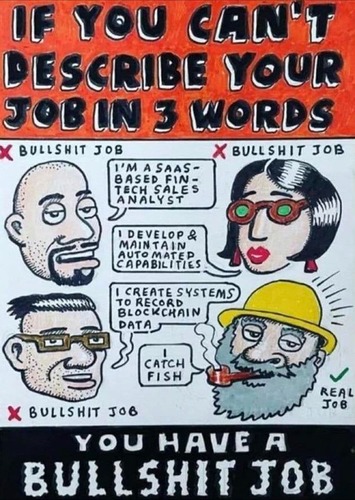 Thanks for posting this, I hadn’t realized that I needed to see it! ^____^

I always used to reply ‘as little as possible’. It earned me a few laughs!

Way back in the days of AOL, my user profile said, “Occupation: Do you ever wonder how they get the little M’s on the M&Ms?” 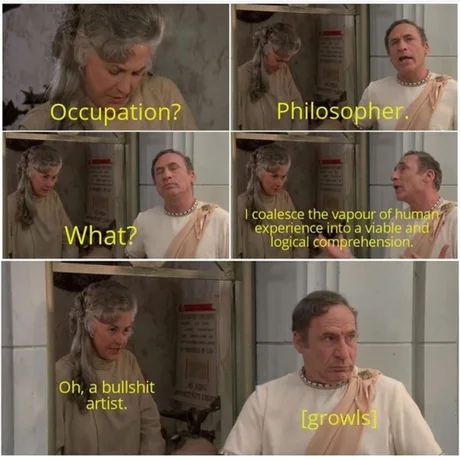 to find something in common to build from.

Small talk is the thing that everyone derides but is really actually very important.

I met someone once who I think had a neat trick. Instead of open ended questions like what do you do, he would ask very specifically, what did you do last night, or what did you do last weekend or day off, things like that. He felt you get to know more about someone that way. Rather than a self-crafted image of someone, you get the concreteness of what do they value enough to spend their time on.

True, but the first two are potentially legitimate jobs. (Actually don’t know what the upper left one involves.) The fisherman could also legitimately answer “I trawl for salmon and trout.”

I spend most of my time turning perfectly good booze into urine.

And food, well, you don’t wanna know what I turn that into.