People who live in fear of the Shirtless Wonder think that if you criticise him in public you’re starting a war with him. They don’t understand that the only things Putin respects are power that’s greater than or equal to his, and the will to use it to preclude war. The latter is something he did his best to ensure we’d lose for 4 years.

Enforcing a no fly zone for Russian jets in Syria would start a war since we’d be shooting down their planes.

Damn! I remember that as well, but can’t find the clip. It might have been an editorial statement by their Ombudsman.

No-fly zones aren’t put in place and enforced by one nation-state but are imposed by a consensus of the international community – usually via American or other Western countries’ leadership on the U.N. Security Council. The trick is getting Russia or China to sign on, but it’s possible with a combination of smart negotiation and PR.

I support this of course but right now some cathartic anger is allowed… no, required.

Sarah Churchwell had many such moments on the programme last night.

I had to include the dunderhead in the audience, he seems to be of the belief that drumpf will stand up to putin…?

We should not start World War 3 with Russia. That would be a bad thing even worse than invading Iraq.

You know it’s been a shitty week if fucking Question Time might improve it.

Oh aye but she was so good last night; rage-fuelled articulate anger.

We better get our act together today so we can deal with this tragic mistake. I’ve done the protests and I question there value but I’m going to this one.

The Morning Edition crew now on board seems to be in “Fuck it, we’ll probably be de-funded soon.” mode

To be fair, ATC and ME were pretty good about calling bullshit on Trump long before the election. But since they’re just part of the “liberal media,” the audience that needed to hear it, didn’t.

Now, I’m being called on to be tolerant. To move forward. To “Get over it.” To accept this…

I will not. I will do my part to make sure this great American mistake becomes the embarrassing footnote of our history that it deserves to be, as quickly as possible. I will do my part to limit the damage that this man can do to my country. I will vote. I will watch his every move and point out every single mistake and misdeed in a loud and proud voice.

Do not call for my tolerance. I’ve tolerated all I can. Now it’s their turn to tolerate ridicule. Be aware, make no mistake about it, every single thing that goes wrong in our country from this day forward is now Trump’s fault just as much as they thought it was Obama’s. I find it unreasonable for them to expect from me what they were entirely unwilling to give.

They will find no shelter here.

Now is not the time to unify

Especially since ‘unify’ more and more often means ‘get in line’.

If Dems in office don’t see this landslide for a right-wing populist as a sign that they need to offer something besides Republican-lite policy, then it’s time for them to face challengers from their own ranks next election season This center-right cat herd we call the Democratic party needs to be reformed or, failing that, abandoned.

To be fair, ATC and ME were pretty good about calling bullshit on Trump long before the election.

This American Life has also been good about this, albeit in depth on specific aspects rather than the day to day stuff. They did a great segment that included a lot about the abandonment of facts in Republican speeches in general, but also a hard look at the racism at the root of the current shift to the right among Republican voters. (Essentially the old “economically conservative” line just wasn’t getting enough votes, but this new openly racist* stance is going gangbusters.)

But, as you noted, they’re part of the liberal media and who needs “facts.”

* - Ah, but even the Republicans that are concerned about this new tact go out of their way to mention that these are good people and aren’t racists. Yeah, they’re just riling voters up by asking them questions about what they’re going to do when their daughter falls in love with a Muslim man. No, nothing racist about that at all …

Now people realize they have to oppose fascist/rascist/misogynistic politicians? The race/campaigning started 23.03.15 - more than 19 months ago!

"All that is necessary for the triumph of evil is that good men do nothing."
E. Burke / John Stuart Mill / whoever

“Take care of yourself and others”

I’d hope people would remember this w/o an election result they didn’t agree with.

I would prefer people remember to do so day to day. I take no issue with the election being a reinforcement, and a reminder.

That’s a rather short sited view.

Start by fighting the people that got trump elected - the Democratic Party. There can be no progress until the Wasserman/Brazile-type folks are removed.

Seriouly, that’s your instinctive response, to blame the loosers? Not a rigged system or a campaign run by a racist, misogynistic demagogue. Or the unprecedented interference of the FBI. No, the DNC & HRC deserved it, because they are evil and crooked and corrupt. While a property tycoon with several outstanding court cases and several legal rulings against him won fair and square.

I really don’t get it, how people can be so blinded in their hate for HRC not to be capable to differentiate.

What you are up against here is the loaded dice and what you are fighting is human fallibility. An instinctive response to risk and live’s uncertainties. Putting down, ridiculing, hating those different, less powerful, while reaffirming your self-worth by being associated with a certified “winner”, that is how demagogue works. The examples are ample throughout history.

As John Steinbeck pointed out, a long time ago, at their core Americans are temporarily embarrassed millionaires, so it’s rather unsurprising that they have attached their fortune to an ostentatious, real one.

Here is a picture of your next President, and don’t dare blame that on the DNC or HRC, because people knew what they were voting for, and they knew what the potential consequences of not voting were, and even here on bbs HRC $12,000 coat got more attention than anything she did for women’s equality.

If you are serious about fighting Trump stop taking the easy way out: “They are all as bad as each other” start seeing things in shades of grey.

means that when the media starts running puff pieces to humanize Trump and his inner circle, remind people that Trump is on the record as being a pro-torture, racist, misogynist, rapey authoritarian.

And that in turn means stop perpetuating the misogynistic myth that somehow the life, the work of a privileged, rich kid who spent his life screwing people and somehow managed to sell that as superior business skills is the same as that of a working woman, who for the past 40+ years has worked consistently hard, to the best or her ability, building coalitions to achieve things she believed in e.g. health care.

Practical, pragmatic hands on politics is dirty work, and as the fight for Obamacare showed, bloody and bruising. But you are talking about a woman who was dedicated to working for healthcare reform 20 years before it became in any way a possibility.

It is not the same. They are not the same, and pretending they are, has got America in this fine disaster, which we will hopefully, somehow, all survive. 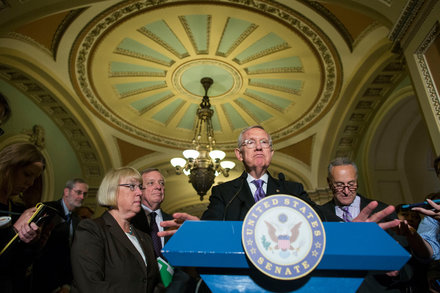 The retiring Democratic leader said that his party should take drastic action if it is triumphant at the polls only to be blocked by Republican-led gridlock.

LAS VEGAS — Senator Harry Reid says Democrats should move to curtail the filibuster if they win the White House and Senate in November only to run up against persistent use of the tactic by Republicans.

“Unless after this election there is a dramatic change to go back to the way it used to be, the Senate will have to evolve as it has in the past,” Mr. Reid told me, referring to a former tradition of rarely mounting filibusters. “But it will evolve with a majority vote determining stuff. It is going to happen.”