Today, class, we will be continuing our study of 21st century America. Please will your holobooks to chapter 7, the 2020’s and the second term of the Clinton presidency.

Ma’am, what about the 2016 election? I think you skipped that.

We don’t talk about that. It’s too unbelievable. 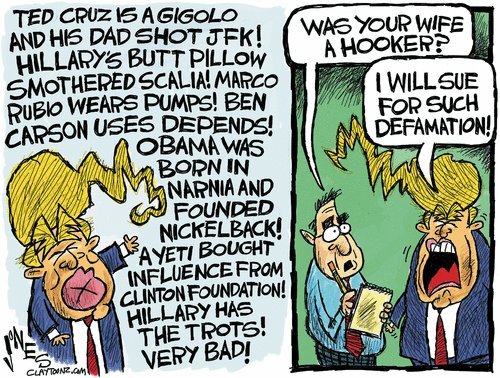 May as well leave my future viral video here too…

The UK is known to have vicious libel laws. How do tabloids like the Daily Mail stay in business?

They make it up in volume.

Hillary has the trots!

The Democrats are having problems with Momentum too?

Okay, accusing him of being a secret Muslim born in Kenya is one thing, but there are some depths to which a person should not go when insulting someone.

The UK as such does not have libel laws, as England-and-Wales, Scotland and Northern Ireland each have their own legal systems. But the libel law of England and Wales was substantially reformed a few years ago, making it much less easy to win a claim.

Surely Gawker and the Daily Mail will be the end of this.

There is a difference between the cases. If this one has merit, then it’s just comeuppance as far as DM is concerned.

Maybe they could go together? Like Gollum and the ring … or chocolate and peanut butter?

And the immigration issue is bundled in there too.

So, If “tired and emotional” is code for falling down drunk, what is the code for “worked as a prostitute”?

Oh, hey, so Trump was a pimp and a white slaver, now? Well, some of America’s most famous presidents had slaves, and at least these were whiii… …well, you should all stop picking on him, that’s all. Let he who is without sin cast the first stone, and all that. But, hey, how 'bout them Hilary e-mails, huh?

what is the code for “worked as a prostitute”?

worked as a prostitute

what is the code for “worked as a prostitute”?

“Lacked the better options and support in life that others can count on”?

Let’s not forget this is the paper that backed fascism and currently employs Richard Littlejohn, someone who claims to be a journalist but is really just a peddler of ‘"ill informed bigotry’ (Blackburn & Hyndburn coroner, Michael Singleton on the suicide of Lucy Meadows).

So hopefully the tax dodging scum (about par for the course nowadays) get what’s coming for them.

Literally talking out of his asshole. I like it.