If nothing else this election cycle has proven that traditional print media organizations are still critical to our society even if the printed format itself is dead. TV news organizations sat on this story because they were afraid of getting sued while real journalists are finally stepping up.

…every 24 hours, but with names of new accusers added as appropriate. I think it’s up to at least five women now? This is going to look more and more like Cosby as time goes on.

What’s the type set equivalent of a mic drop? 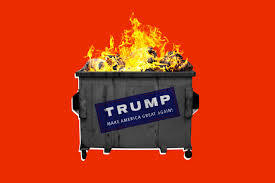 “We welcome the opportunity to have the court set him straight.” Much more polite than Arkell v. Pressdram but still funny as hell.

"Messrs Jeffrey Benson and Michael Isaacs of Tracing Services Ltd, currently on bail on charges of conspiracy to create a public mischief, ...

–30– has been traditionally used by journalists in North America to indicate the end of a story. It is commonly found at the end of a press release. There are many theories about how the usage came into being, e.g. from that number's use in the 92 Code of telegraphic shorthand to signify the end of a transmission in the American Civil War era. In Quebec, a journalism magazine published by the Fédération professionnelle des journalistes du Québec is called -trente-, the French word for thirty.

The tombstone, Halmos, end of proof, or Q.E.D. mark "∎" is used in mathematics to denote the end of a proof, in place of the traditional abbreviation "Q.E.D." for the Latin phrase "quod erat demonstrandum", "which was to be shown". In magazines, it is one of the various symbols used to indicate the end of an article. In Unicode, it is represented as character U+220E ∎ End of Proof (HTML &#8718;). Its graphic form varies. It may be a hollow or filled rectangle or square. In AMS-LaTeX, the symbol i...

I think the latest tally is actually closer to 11.

In other words: the women are claiming Trump did exactly what he bragged about doing, so how can it be libel when he said it first and they are just backing up his braggadocio?

Maybe a real-time ticker on the NYT website then.

In the end, it can only be good for him that these women are coming forward to back up Trump’s claims about himself.*

It’s amusing to see how outclassed (in several senses of the word) Trump’s legal team seems to be. If Nixon couldn’t scare them out of printing the Pentagon Papers, I don’t think that they’re going to cower in fear from Trump’s lawyers.

…That would be the New York Post’s response. The NYT is going to say the same thing, but all tony and shit with big words and lawyers.

All this brings to mind the saying that you should never get in an argument with someone who buys ink by the barrel.

I think the New York Times should stage an event dropping an actual barrel of ink.