Humorless man explains that rock music, even Christian rock, is full of witchcraft

I swallowed hard when he said that. Thank goodness he clarified a second later. Ears. Phew.

I can’t say you didn’t warn me. But damn, watching this altered the state of my mind anyway. Best bit? That’s it’s only part 1 of 18.

Every great has their time regardless of the blues from the pacts they may or may not have made.

Hell ain’t a bad place,
Hell is from here to eternity

Yes. And “other people”!

It’s fun to just skip though the different parts until you find something interesting. This guy goes everywhere: occult, sex, rebellion, drugs, backmasking and even a bit about how christian rock can’t possibly be christian…

I love how the first thing he says about the Beatles is that they’re communists. Hate to tell the christian right this, but Jesus wasn’t a capitalist.

Oh, who am I kidding. I love telling them that.

In high school I knew a guy that said that if he ever made a heavy metal album he was going to backmask it, but instead of “Hail Satan!” and “Kill your parents!”, is was going to be filled with “good” stuff like “Do your homework!” and “Mow the lawn!”

This is why I don’t trust evangelical Christians as a general rule.

It’s a solid rule for evangelical anything

It’s not just rock, though

Yes, any music containing a diminished fifth belongs to the devil.

The BBC tried to sex up Bach’s organ pieces a while ago in a TV series called ‘21st Century Bach’, which employed ‘unusual camera techniques’ and had a title sequence by Damien Hirst. Not sure who it was really intended to appeal to…

He had me at “Can you plug Jesus Christ in to a stage…?”

Thank you, Berkeley Breathed. There was a time when I would have believed this crap, but Bloom County saved my life. Hallelujah! 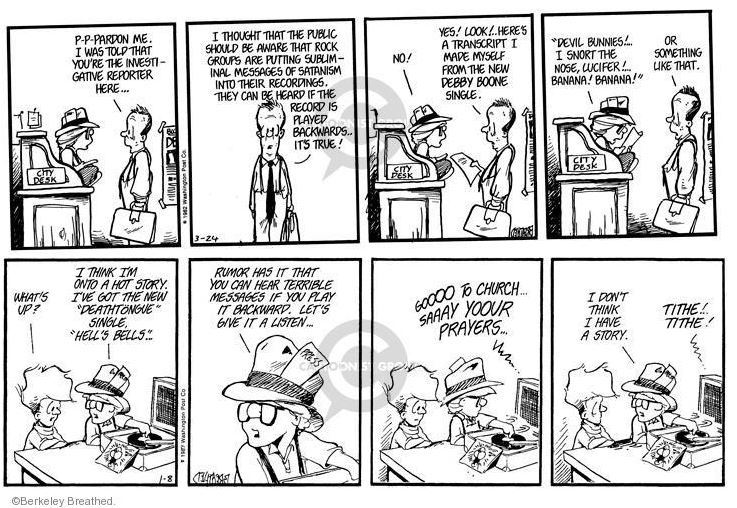 Quite the contrary. Jesus’ abilities would’ve let him easily be in place for any good waves that come along, and he’d never have to bother with a wetsuit when surfing good West Coast breaks. If Jesus didn’t surf, then he missed…a golden opportunity.

Hate to tell the christian right this, but Jesus wasn’t a capitalist.

Yeah. I keep waiting for U.S. Christians to rise up agains the money changers. When’s it gonna happen already?

Back when I was in college, a classmate was worried that the Gaelic folk song “Alasdair Mhic Cholla Ghasda” might be Satanic because it wasn’t in English, I told him that wasn’t the kind of thing I lost any sleep over.

There was also a soapbox fire-and-brimstone preacher at that school who declared that all music that doesn’t explicitly “glorify the Lord” is Satanic. So I asked him if instrumental music counted, and he said yes, it did. I asked him if the concertos of Antonio Vivaldi, who was a Catholic priest, were Satanic. He stopped talking to me and went on with his rant. (It wouldn’t have surprised me though if he was in the “Catholics are devil-worshipping idolaters” camp.)

Well the ancient Welsh song Nos Galan, the basis for Deck the Halls, is certainly a lot hotter stuff in the original lyrics than it is now. Surely any song that talks about kissing in the arbor and the soft bosom of the beloved must have been inspired by Satan. Well, I guess except for the Song of Songs. Because that’s all allegory, yeah.

It’s great that someone so humorless can bring so much humor to humanity.

The 2nd video is pure John Hagee - everything but Christ + the word of god is EVIL. These kind of sermons are his bread and butter.