It’s amazing how clean and upright he makes even Nixon look. It’s like we have Boss Tweed as President.

At least Boss Tweed recognised the value of immigrants to this country, even if it was mainly to get their votes. The racist blowhard in the White House can’t even manage that.

Interesting which parts of the long list the Lincoln Project edited out (abortion for one). Reminder: the Lincoln Project is an expedient ally who will immediately pivot and toss Biden and Democrats under the bus the minute he wins. They are the rats on the lifeboat watching the ship sink and saying “just because we helped gnaw all those holes, it’s not OUR fault.”

I agree, but I think they’d say they are trying to overwhelm with disgust people who are otherwise avidly anti-choice. Their whole gimmick at this point seems to be turning Republican voters against Trump. I am not sure leaving that in would be in the interest of the effort.

Pretty much any other time in recent history I would differ with the tactic, but I truly believe we are fighting for survival at this point. I’ve said it before here, but I don’t think any of us can imagine what he will be like as a lame duck with no fear of another election.

I am willing to overlook a great deal to see that doesn’t happen.

I find it interesting to note the parts that the Lincoln Project chose to edit out of the bit. I mean, I get what audience they’re targeting, but still…

I’m with you on that sentiment. Right now, it’s important to bail out the ship enough that it’s no longer sinking. We’ll deal with the rats once that’s done. Heck, we might even play nice and use humane traps. But the last thing I want is to get things righted and allow the resurgence of the old GOP, which is almost exactly the same as the current one but with better PR.

That’s the difficulty, on both sides. I think there are a great many Democrats who would go so far as to vote for Bush at this point, if it would just rid us of this dumpster fire. The problem is, he is a dumpster fire too, just a lot better at hiding it. 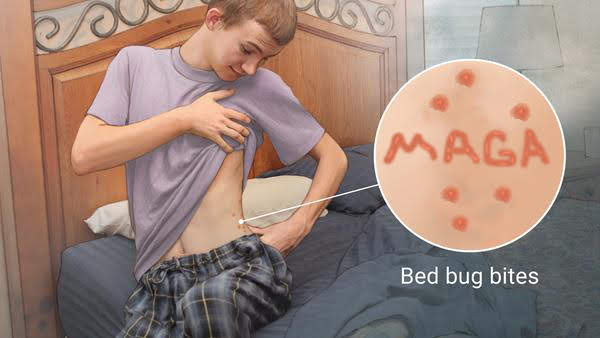 How did The Lincoln Project get permission for this? Surely someone as clued-in as David Cross knows about the machinations of TLP?

Don’t fall for these excuses. Trump is not the outlier, he is a logical continuation of Nixon-Reagan-Bush succession, there is nothing in what he says, or does, or expresses that is outside common Republican Party doctrine since the southern strategy. If a person was a Republican in 2016, post Reagan and Bush Jr. there can be no thing in Trump that should scare them off.

If they were happy with the pandering to extreme right, “silent majority” Christianity, Reagan’s voodoo economics, racist signalling etc… etc… etc… there is no moral high ground for them left.

Now there is no dishonour in admitting you were wrong and changing political colour but that is not what is happening here, this is people avoiding responsibility, supporting the same ol’, same ol’, while dodging the outfall whenever it threatens to hit them.

Don’t trust them, the next time there is another barely literate populist anti-choice lunatic on the ballot they will vote just the same again.

They botched the last subtitle 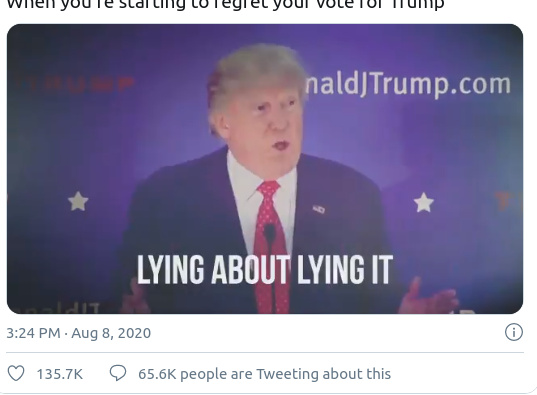 The Lincoln Project isn’t mad about the president.

They’re mad that he says the stuff they believe out loud.

How did The Lincoln Project get permission for this? Surely someone as clued-in as David Cross knows about the machinations of TLP?

Doesn’t mean he can’t share their immediate goal of getting Trump kicked out of office.

Absolutely. I am as appalled and infuriated by Trump as anyone- I just can’t understand how anyone is surprised by him. The current apocalypse didn’t just pop up out of thin air, it’s the logical and predictable conclusion of the last 50 years.

I’ve said it before here, but I don’t think any of us can imagine what he will be like as a lame duck with no fear of another election.

I honestly think our best outcome is for him to win by a narrow, disputable, technical victory, while flooding congress with enough progressives to have a veto-proof deep blue majority. That means a real impeachment, and a real investigation into Russian interference, which opens the door not only to removing and prosecuting Trump, but also to reversing key changes and removing appointees like Kavanaugh.

If Biden wins, he’ll pardon or ignore everyone and everything that’s been done, and while we’ll certainly be better off for a few years, nothing substantial will change and we’ll be right back here in less than a decade. Plus, Trump and Co will poison the wells, salt the fields, and steal every last bit of silverware on the way out.

the enemy of my enemy is my friend… for now.

My enemy’s enemy might be a useful tool in defeating my enemy, but that doesn’t make them my friends.