'If you're full of bullshit, I'm coming for you.' Katie Porter (D-CA) to Samantha Bee, on why she's in GOPs' nightmares

I love this woman ! We need so many more like her in leadership roles, and we need them NOW. !

Now I can’t get Sasquatch Katie out of my head.

Clone her & her mentor to save America!

Damn! We need “No Bull Shit” representatives like Katie Porter here in Florida!
Sometime before we slip into a merged Atlantic Ocean and Gulf of Mexico, please!

And can you believe she’s from the traditionally repub area of Orange County? That’s some badass California in her! Keep on keepin’ on, Katie!

The Orange Curtain has fallen and Katie Porter shows us why with her candor and assertiveness. Californians are getting rid of the do-nothing/know-nothing Republicans.

What is Samantha Bee’s reaction to this all about? Is she shocked or turned on or what?

I wish we had 300 more of this type of representative. Porter and AOC - the antidote to Trumpist grifters and grafters.

Katie Porter would be a perfect Vice President. Smart, well educated and energetic. And no bullshit. She’s more like Truman than anyone else I’ve seen for many years - and that’s great.

Really? Must we have comments speculating on Samantha Bee sexually? These comments are not only off-topic but also show it’s time to grow the fuck up, boys.

But how else will they signal their heterosexuality and virility if they don’t objectify wimmins…!!! /s

True, except Samatha Bee was pantomiming being turned on as Porter talked. Her show is a comedy show.

Californians are getting rid of the do-nothing/know-nothing Republicans.

Fingers crossed that Devin Nunes (who famously debased himself for Trump throughout the entire impeachment process) finally gets ousted from congress this time around but his challenger Phil Arballo has an uphill battle. 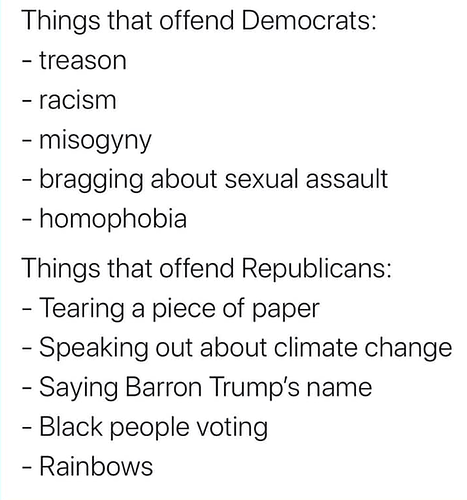 There are still a ton of dumbass “red till I’m dead” types here in the OC, but clearly there’s hope as we elected Katie.

I’ve never really been proud of someone I helped elect before now (Ok, maybe Obama for a little bit, then…).

The problem is that a lot of people talk like she did before the election, then it’s all same old same old afterwards. Katie’s proven to be the rare example of a politician with a spine (even after the election) that’s willing to rip into anything and piss anyone off to properly represent the people who put her in her position.