I'm a big fan of this inexpensive little fan

The fun thing about those type of fans is if you weight a balloon just right you can make it hoover in the vortex and move it around the room.

It could be good when camping on those hot humid still nights when any airflow is a blessing.

For a little more money ($19.99) you can get one that’s USB rechargable (comes with a 2200mAh lithium battery) and clips to things. I got one for riding stationary bike - I need the wind! 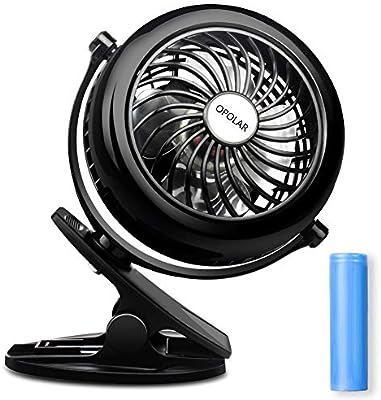 So he gets 10 hours from it on batteries - as if that is a function of the fan. Dude if you use crap batteries you’l get less…or more. No mention on the various battery performance or whether Fan B will run shorter/longer on the same battery. Plenty of Chinese USB fans around for no more than $5.

So he gets 10 hours from it on batteries - as if that is a function of the fan.

It’s a function of the batteries and the current draw of the fan. I don’t see any mention of a speed control which would allow trading breeze for battery life.

I used to have a large rotating Emerson fan. All metal and more or less indestructible. Clean it in the spring, give it a few drops of oil and you’re good to go. I think we got it from my Grandmother. The thing was ancient. The fan, that is.

[not my actual fan]

Was that his plan?

That’s amusing, i literally just got a Honeywell HT-908. It’s a 15in fan and it’s great. got it to replace a 12" Honeywell fan that started to squeak beyond measure that i’ve been using nonstop for the past 3 years

Could’ve likely cleaned it out but the base was damaged in a past move.

This fan sounds like a good candidate for a solar retrofit. I suspect it would be fairly easy to modify it so that rechargeable AA batteries could be charged through the USB connection from a solar cell.

I’ve done a similar mod for a couple of LED lights which use three D cells. A little rewiring, the right rechargeable D cells, and a couple of small solar cells in my south-facing bedroom window has resulted in reading light for the last 10 - 12 years.