Incredibly aggressive squirrel tries to attack man through a window

The squirrels are particularly active in my neighborhood right now. I find myself wondering what’s really going on in their heads. I mean, I’ve seen way too much Disney, and I’m hundreds of times their mass, and my lifespan is greater than theirs by quite a bit, so of course they seem like cartoon characters to me. But from their perspective, Winter is Coming, it’s mating season, and there are perfectly sensible ways to go about it that their little rodent DNA has already primed them for, no schooling necessary. I kinda wish I could get out of the mindset that they exist for my amusement.

Of course, my life looks equally ridiculous from the POV of a corporate legal entity.

Makes me miss having a dog.

Uppity squirrels are a solvable problem. Just gotta have some other animals around that put the fear of god in 'em.

As you should, that game is excellent.

I’ve seen that look before.

That squirrel has tasted human blood. 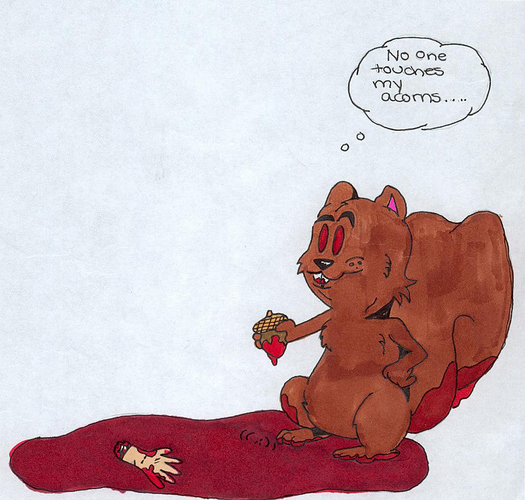 See now that’s adorable because it’s twitchy and weak and will never get in. . Now imagine something that looks like it bench presses and has a determined and thoughtful look in its eyes:

I’m rooting for the squirrel. I hope he swallows your friends whole.

I’m guessing the house actually belongs to the squirrel. Stand your ground, squirrel.

I lived in a side-by-side two family and, unbeknownst to them, a squirrel got into my neighbor’s kitchen one day when they had the screendoor propped open. Sometime later, they left the house, closing the door behind them. To get out, the squirrel gnawed through the window trim until it was able to squeeze out around the screen frame (it was summer and the windows were open). However, while it was in the kitchen, said squirrel discovered that this was the ultimate place of yummy and easily acquired food, so about 4 days later, my neighbor walked into the kitchen only to find the squirrel calmly sitting on the table munching on some crackers that had been left out (in the box). It had gotten in by clawing a hole in the screen of the other kitchen window.

About a week later, I heard a noise coming from my kitchen, and went in to find a (the) squirrel trying to make a hole in my screen. Thus started the squirrel wars, but that is a tale for another time. 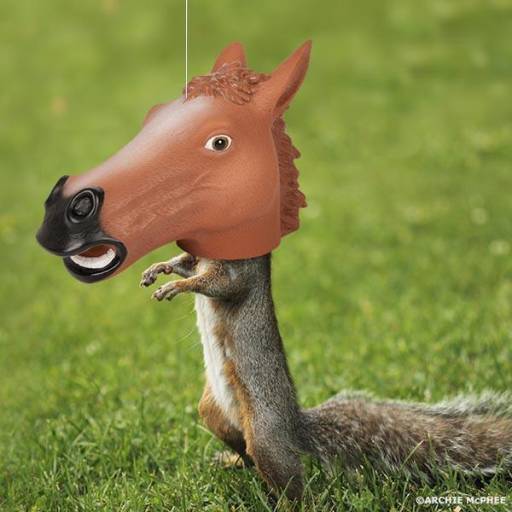 This seems likely to me. I once lived near a squirrel that was used to being fed; after a while, it started grabbing pants legs to get attention. I’ve since heard reports of similar behavior. Feeding squirrels seems to be a bad idea.

Yeah, occasionally one hears about squirrels “attacking” people, and it’s almost always because they got used to people feeding them - once they lose their fear of humans and associate them with food, they get very aggressive.

I never realized how much like centaurs they look. Huh. I wonder if that’s where the myth came from…some boat brought Australian animals to someplace in Eurasia, and the rumors spread.

I was thinking he/she? look looks like Baphomet. Add a couple of horns and wings and… 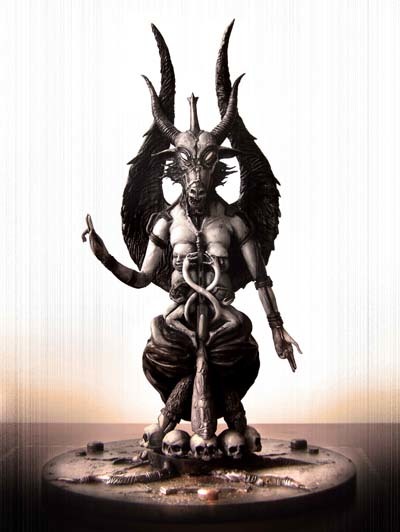 Maybe the guy filming is wearing the logo for the MC Mad Squirrels, and the furry guy is trying to mete out the appropriate punishment…

When I was a kid I fed squirrels. That’s exactly what happened when I ran out of nuts. Very happy nylon screening wasn’t a thing back then.