Is the daycare-stalking Pittsburgh bobcat just a regular cat?

I had read that it affected risk taking behavior, making the infected take more risks, and cats aren’t the same sort of risk for humans as they are for mice.

I think that may be true of the rodents, but AFAIK there’s no evidence of this in humans. It’s a huge leap to say an effect that happens in mice in the lab, or even in mice in nature can happen in humans. You really can’t directly extrapolate from one species to the other, or that high up the neurological complexity ladder without direct evidence to give you reason to. Unfortunately pop science reporting loves to extrapolate these kinds of things, which is why a lot of people have wrong ideas about a lot of medical things, unfortunately.

Oh yeah, most of the articles seemed to try and conflate these sort of things, the first article I read about toxoplasmosis just said it makes mice take more risks, and didn’t try any sort of cross species assumptions, either of cats or humans who are also infected.
Problem is some smartass looking for clicks tried to rewrite it as though infected mice loved cats, and proposed it affected humans the same way (because humans obviously have no use for small predators to keep pests in check). Humans too often enjoy a good anthromorphization.

Bobcats ARE elusive. In all my years I think I have caught a glimpse of one twice.

That is - uh - just a cat. Possibly a feral cat

…what the hell is wrong with people? That’s so obviously an everyday tabby cat! Look at the eyes! The size of the nose and the muzzle! The general shape of the head! The ears! Do people not recognize cats anymore? Aah…

Yes, domestic/feral cats can be large, but large cat =/= bobcat for pete’s sake.

Fake felines of the world, unite and take over. 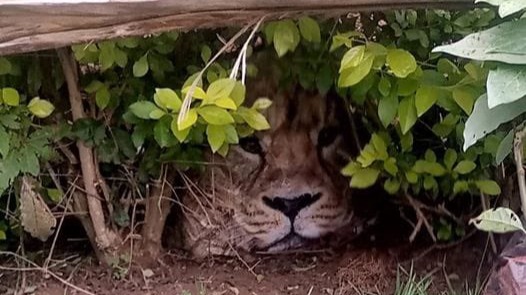 The bag had been left under some bushes in the shade when locals spotted it and sounded the alarm. | ITV National News

Hey, that looks just like my ungrateful beast (who is not a bobcat).

Listening to the news report again, it’s clear the “expert” who identified it was a cop.

Oh LOL, that would explain a lot.