Okay, now I’m fascinated. Besides being eager to hear this collab, Jack White claims in the video that Third Man has recorded “the previous pope” and a band made up of the elderly mothers of the members of Led Zeppelin. A quick search on their site comes up empty so I’m assuming he was just being goofy.

Most likely real. Jack White sometimes makes recordings direct to vinyl to be released at Third Man only. It’s a novel way to produce and market new music.

I hope that Jack Black has as much fun as he seems to. If so, his life must be a blast.

When they finished their collaboration did they celebrate with some whiskey? Or did they go out for fast food first?

As long as Jack White just plays guitar and keeps his squeaky mouth shut I’m fine with it. Most people think Meg White’s complete lack of skill on the drums is the worst part of the White Stripes, but IMO Jack White’s winy voice made me want to ice pick my ear drums.

I doubt he was joking as Third Man Records does a lot of interesting limited run recordings. It’s possible that they were not widely sold.

(#94 on Rolling Stone’s “Best Drummers of All Time” list)

I knew people who thought Thurston Moore needed to learn to play guitar.

That reminds me, it’s been a while since I had a go at the fantastic Grey Album by DJ Dangermouse.

I was gonna say, while I am no expert, never noticed a problem with Meg’s drumming.

I think people took Meg White’s drumming for granted because she was so low key, i’ve heard that she’s a pretty skilled drummer but watching some of their music videos it might be easy to assume she’s not bringing much to the White Stripes.

Oh and i saw Tenacious D live last year and both of them are very grey. Let me see, i think i have a pic on my phone. 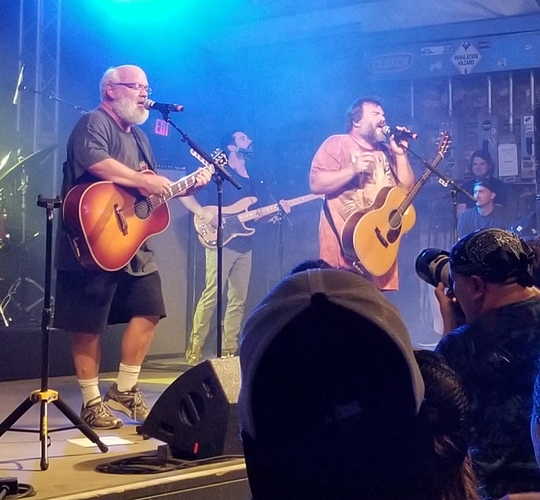 When you look at some of the White Stripes musical influences, Son House, Blind Willie McTell and Robert Johnson, The Gories and The Sonics, MC5 and The Stooges, having a meticulous, well crafted, well trained drummer doesn’t really make sense. Meg did a hella great job.

It’s Rock and Roll for crying out loud! Bang it out! Feel it! Jack and Meg rocked the house and IMO Jack White is doing a great job keeping Rock and Roll alive.

And as we’re seeing here with Tenacious D, having a very fun time doing it.

I think people took Meg White’s drumming for granted because she was so low key, i’ve heard that she’s a pretty skilled drummer but watching some of their music videos it might be easy to assume she’s not bringing much to the White Stripes.

I have a theory a little bit like the “sufficiently advanced technology being indistinguishable from magic” thing. That is that you can’t tell an unskilled artist from a artist who is much more skilled than you who wants it to be that way. Most easily observed in common reactions to some genre’s of painting. Some of John Cage and John Zorn’s weirder stuff make good examples in music. The Carlton is a good example from dance.

But especially drummers. I never try to guess how good a drummer is, since a key to good drummer is staying out of the way.

My take might be off base here but i think some of the misplaced criticism directed toward Meg White is because she’s a female drummer. Her being low key makes her an easier target as well, maybe i’m wrong in my assessment but its likely true for some critics at the very least.

“Oh she’s just Jack White’s sister, she can’t be all that good. Jack’s the one with all the talent”