Saw this yesterday and he literally does everything wrong. He says beforehand that he’s not familiar with the lighter and it bursts into flames when he’s messing with it indoors. Some stuff catches flame while he’s trying to put out the main fire, so he sets the flaming bag of stuff on top of a trash bag with more paper and turns away . He then notices and grabs that pile of burning crap gingerly by some cardboard boxes… and surprisingly this is also flammable. Eventually he gets the great idea of smothering the fire with a heavy comforter, but instead of you know… smothering the fire he proceeds to bat at it, which again and very surprisingly fans the fucking fire.

td:dr: I have no sympathy for this guy. 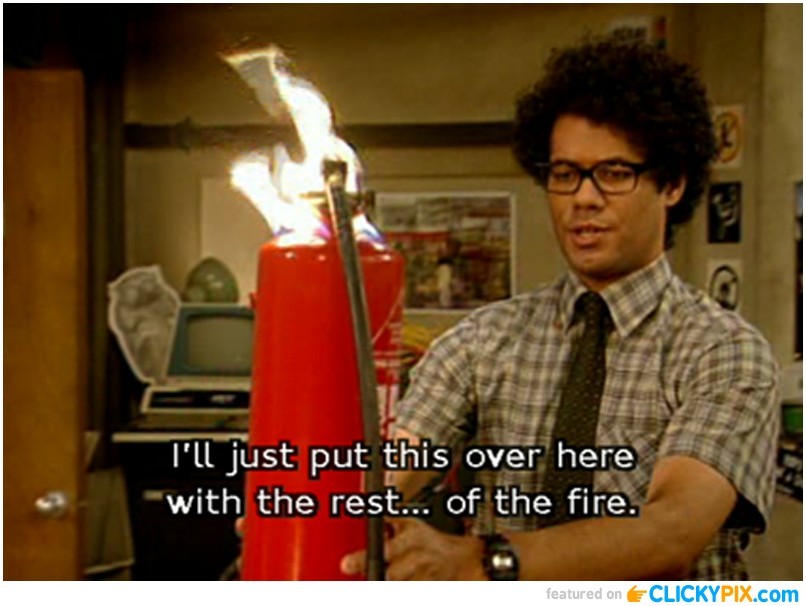 Another case of what my firefighter friends call ‘job security’.

Also a good opportunity to share this with those that might not be familiar with the show:

Not just any trash, trash full of the oily tissues he wiped the lighter with multiple times before when spilling the fluid.

Just because he does everything wrong doesn’t mean you have to have no sympathy. What, you’re only going to have sympathy for people who get everything right? If they get it right, they don’t need any sympathy. Or is there a threshold of getting things wrong that you’ll have sympathy up to? Two things, three, maybe, but beyond that they’re on their own?

Is that narrated by Peter Serafinowcz? Reminded me a bit.

Precisely. Because he made mistakes we should all just laugh and point and feel good about how much smarter we would be in the situation, how we would make all of the right choices. He got what he deserved because he didn’t know something. We shouldn’t feel anything for a guy who just suffered loss and could (along with others) have died because he didn’t know how to do it right. Ha ha ha, what a dummy! Hilarious!
What the fuck is wrong with people?

Because we choose competition over empathy.

Did I miss something? Like… for example, how does it end? Seriously, is he ok? Did this end with a annihilation of his place or just some charring? I have so many questions. This should be an educational video.

Have you put this in the gif bank yet? Because it needs to be there…

I keep it handy, let’s just say it’s close at all times.

I’d say “Chastised” is a better middle name than “Chaste”.

I was going to say this looks like a “what not to do in case of fire” video. Every step in the progression led to him literally adding more fuel to the fire. He kept bringing out that big metal bowl with the teeny amount of water then disappearing for several seconds. I kept thinking. couldn’t you drop the big bowl over the fire and smother it?