As a sports fan, and more specifically a football fan, this event hasn’t received one second of my attention except for telling anyone within earshot how horrifying it is. It is an incredible shame that western nations haven’t pulled out wholesale and boycotted this event. Don’t believe that FIFA couldn’t have organized this event elsewhere with 6 months notice. What is happening in Qatar deserves the same level of ostracization and sanction as what Russia is experiencing.

Some would argue that it’s important to hold these events in countries like Qatar because it brings sunlight to their operations and forces them to clean up their act. Or that boycotting/ostracizing just drives them into the arms of like-minded autocrats. It’s plain to see right now that those arguments hold zero water. Democratic nations haven’t gained any geopolitical leverage by allowing their teams to compete there.

…It’s also worth calling in at the archives of his former podcast, The Bugle. Their fifteenth anniversary spinoff show, Top Stories, has been revisiting old headlines from the last fifteen years, recently, and two episodes this week covered previous World Cups.

The “splurge” of announcing both Russia and Qatar in the same event, the two most controversial, and “dodgy” candidates for 2018 and 2022 - was very clearly, looking back, a “cash grab” for FIFA before many of them were expelled for corruption (11 of 22 voters).

All the assurances about Qatar, esp. that is would go ahead in the summer, were all lies - but despite the obvious corruption - they still pressed ahead.

The message “Image not available in your country” on the video seems quite appropriate for something about Qatar.

As long as FIFA exists I’ll readily admit to being glad that most Americans aren’t into futbol like people in the rest of the world are. Amazingly, that criminal organisation would be even worse if the U.S. went as crazy over the World Cup as it does the Super Bowl or March Madness.

I don’t know… we (meaning primarily white Americans) get bad about our sportsball here, but then again, American football fans never joined a genocidal militia… 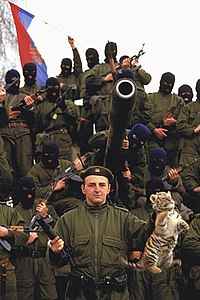 Željko Ražnatović (Serbian Cyrillic: Жељко Ражнатовић, pronounced [ʒêːʎko raʒnâːtoʋitɕ]; 17 April 1952 – 15 January 2000), better known as Arkan (Serbian Cyrillic: Аркан), was a Serbian mobster, politician, sports administrator, paramilitary commander and head of the Serb paramilitary force called the Serb Volunteer Guard during the Yugoslav Wars. He was on Interpol's most wanted list in the 1970s and 1980s for robberies and murders committed in a number of countries across Europe, and was lat... 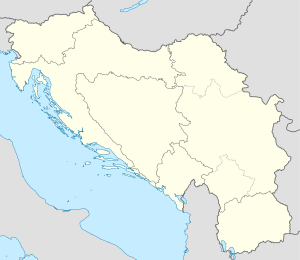 The Dinamo Zagreb–Red Star Belgrade riot was a football riot which took place on 13 May 1990 at Maksimir Stadium in Zagreb, SR Croatia, then part of SFR Yugoslavia, between the Bad Blue Boys (supporters of Dinamo Zagreb) and the Delije (supporters of Red Star Belgrade). The incident took place just weeks after Croatia's first multi-party elections in almost fifty years in which the parties favouring Croatian independence had won the majority of votes. The riot resulted in over sixty people wounde...

I mean, I guess it COULD get that bad… given what’s happening right now in the US, that’s a possibility, but it has not happened thus far…

The NFL and the NCAA are both rotten organisations, but nowhere near as corrupt as FIFA. They’re also not sending their championship games and tournaments to hardcore authoritarian countries like Qatar or Russia.

Still, in the current atmosphere I agree that it’s easy to envision any American sport’s fanbase sinking into Balkan-style political thuggery given a certain mix of incompetence and malice and greed in a league’s leadership.

Also, I haven’t thought about Arkan in a long time. He was one of the monsters who loomed large in the news coverage when I was a journalist in the 1990s.

The NFL and the NCAA are both rotten organisations, but nowhere near as corrupt as FIFA.

Although, honestly, I think that the NFL is getting close…

They’re also not sending their championship games and tournaments to hardcore authoritarian countries like Qatar or Russia.

No, just to American cities.

in the current atmosphere I agree that it’s easy to envision any American sport’s fanbase sinking into Balkan-style political thuggery given a mix of incompetence and malice and greed in a league’s leadership.

Could be, but I don’t know if there is the same kind of organization of fan clubs around American football and Basketball the same way there is in soccer. ATL has a few fan clubs here for Atlanta United, which is cultivated by the team. Never any problems like you get in some places with hooliganism, as far as I know… but then again, we’re ATL, so we’re too busy to hate!

I haven’t thought about Arkan in a long time. He was one of the monsters who loomed large in the news coverage when I was a journalist in the 1990s.

He was awful, and the way the Milosevic regime cultivated a relationship with him via his wife Cece was fucked up.

No, just to American cities.

Good point. Or to American states run by fascists. Although some leagues have been pretty good about declining to hold tournaments in states where bigoted laws create an unsafe environment for fans and players.

some leagues have been pretty good about declining to hold tournaments in states where bigoted laws create an unsafe environment for fans and players.

Huge soccer fan, not watching a second of the tournament or highlights. Trying to avoid it’s sponsors as well, though I don’t know a lot of them (as I am not watching) other than a beer I don’t drink. I’d love an ad boycotter that would just add a blood icon to sponsors of FIFA, Olympics and other orgs that use humans as work fodder.

Sadly I’ve got the good old “video not available in your country”. Does anyone know of an alternate link?

The usual response - and good advice for other reasons - is ‘get a VPN’.

TrustZone works well for me and is very inexpensive. But yeah, it costs money. Other VPN providers are available.

Air conditioning huge buildings so grass can grow in the desert has a very specific flavor of futility to it.

Notes of unconstrained capitalism, infused with absolute monarchy, and a finish of disregard for human suffering fills this World Cup with a dizzying, fetted bouquet.

I haven’t watched the video but even years ago, the announcement that Qatar was going to spend $200 billion in oil dollars to bring in third world labor to build air conditioned soccer stadiums (technically, stadia) in one of the hottest deserts in the world to host a few weeks of adult boys kicking around a ball, that’s enough for me to know about it.

There is so much poverty and need in the Middle East. Qatar has accepted precisely zero Syrian or any other refugees, but instead has flown in (I assume) a bunch of Pakistanis to work on these vanity projects and will fly them right back out the moment they aren’t needed. They are refreshingly honest about their citizenship policies.

Qatar has accepted precisely zero Syrian or any other refugees

They are refreshingly honest about their citizenship policies.

That’s about as “refreshing” as a 5-minute stroll in downtown Doha in August.

… if only we could combine racism, sexism, and xenophobia into one big stew of hate HERE amirite